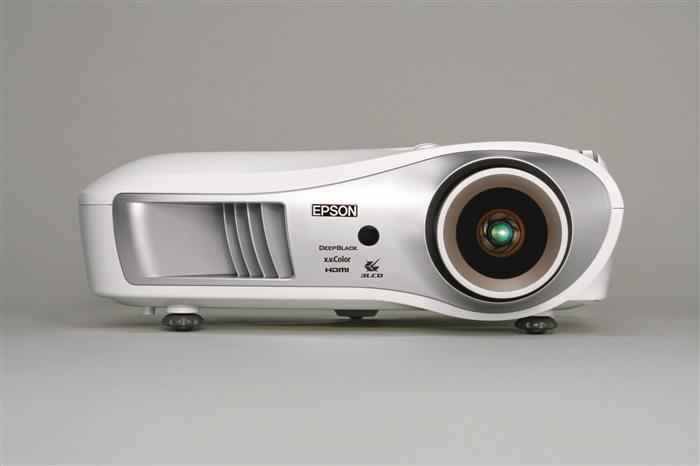 There is no question that if you’re trying the recreate the movie theatre experience in your home, the best way to do so is to install a projector. That’s because a big picture is capable of changing your whole viewing experience – in many instances it can make you feel like part of the on-screen action. How about that for a sales pitch? But can a moderately priced projector deliver the same kind of performance that you’re used to at the movies? You betcha! Enter Epson’s PowerLite Home Cinema 1080 UB projector, priced at $2969.

Although a projector should never be chosen based on its specifications alone, they provide a good starting point when choosing a model that’s right for you. Unlike a typical LCD-based projector that uses a single LCD to create the picture, the Home Cinema 1080 UB uses a combination of three LCDs. Epson calls this C2Fine 3LCD technology and claims that it can produce superior images compared to a single-chip LCD projector. 3LCD technology is said to improve the brightness, colour saturation and contrast of the picture.

The Home Cinema 1080 UB, which I’ll shorten to “1080 UB” for the remainder of this review, has a native resolution of 1920 by 1080 pixels (or 1080p if you prefer) and a native 16:9 aspect ratio. The UB stands for UltraBlack, Epson’s recently introduced technology which is said to produce the deepest possible blacks in the company’s projector line-up. The 1080 UB offers a 4,000:1 native contrast ratio, which peaks at 50,000:1 (dynamic) with the help of an auto iris. Its brightness is rated up to 1600 lumens in the Dynamic picture mode. A 12-bit colour processor allows the projector to produce over a billion colours. Epson promises a very quiet operation of the projector, producing just 24 dB of noise. The rear panel contains a healthy number of video inputs including two HDMI version 1.3 (24 fps compatible) and one each of component (also 24 fps compatible), S-video, composite and VGA. There is also a 12 volt trigger output and an RS-232C port.

On the outside, the 1080 UB looks very sleek thanks to its curvaceous body. The top of the case houses a couple of handfuls of buttons which provide access to virtually all of the projector’s functions. The zoom and focus are controlled manually by twisting two rings around the lens. The projector’s 2:1 zoom ratio allows it to paint a 100-inch picture from a distance of just 10.4 feet or as far back as 22.2 feet, which makes its installation very flexible. The horizontal and vertical lens shift are also manually adjusted by two dials on the top and side of the casing.
The 1080 UB comes with a really great remote that other manufacturers could learn from. Its buttons are of generous size, well spaced and organized, and backlit in three distinct colours. The ‘On’ button lights up green, the ‘Off’ button lights up red and the remainder of the buttons have an orange backlight. The logical arrangement provides single-hand access to all of the projector’s functions. Direct source buttons allow access to each of the projector’s inputs with the press of a single button. I also enjoyed the inclusion of the group of buttons that provide direct access to some of the key picture adjustments. The remote is very responsive and worked virtually everywhere in my home theatre – without even being pointed at the projector.

I powered on the 1080 UB for the first time and took a quick look at its menu system. The simple layout of the menu system makes it easy to navigate, although it has a very basic and frankly outdated look – there’s certainly no pizzazz to it like with the menu of the Pioneer plasma also reviewed in this issue. Nevertheless, the menu offers lots of preset picture modes to choose from: Dynamic, Living Room, Natural, Theater, Theater Black 1, Theater Black 2 and x.v.Color.

I calibrated the 1080 UB using the Digital Video Essentials DVD, using the Theater Black 1 picture preset as a starting point, and performed my testing in a completely dark room. After the calibration, the 1080 UB produced a noticeably better colour accuracy. My source was a Pioneer Elite BDP-95FD Blu-ray player connected via HDMI and the image was projected on to our reference Elite Screens Home2 90-inch screen. As I made the adjustments, I quickly realized that the 1080 UB offers the most extensive set of picture controls that I’ve seen in a projector. There are simply too many adjustments for me to go over in this review, so if you’d really like to know what they are you can download the complete manual from the Epson website. This is definitely a projector that tweakers will love!

Then I pulled out my usual “torture” test discs from Silicon Optix. The projector did a mediocre job at deinterlacing 480i signals – jaggies were visible in the waving flag pattern test scene. There was about a 0.5 second delay when picking up the 3:2 sequence (in 480i), however with real world material, such as the Gladiator scene, no moiré artifact was visible at all. The deinterlacing of 1080i signals was performed properly – jaggies were virtually completely eliminated. On the other hand, the projector failed to pick-up the 3:2 sequence (in 1080i) and showed visible moiré in the upper stadium seats. The 1080 UB offers three levels of noise reduction which effectively removed noise without sacrificing too much picture detail for all picture resolutions.

With all the formalities out of the way, I was ready to do some movie watching – I started with Star Trek: Insurrection and Apollo 13 on standard DVD. One of the first picture aspects that I observed were the excellent skin tones. Between the two movies, I closely evaluated the skin tones in indoor and outdoor scenes, under various lighting conditions. The characters’ faces looked natural and lifelike in all instances. The colours, overall, were richly saturated. The grass and other vegetation looked vibrant and realistic. The 1080 UB produced impressively deep blacks. This was well presented in Apollo 13 when the spacecraft maneuvers around the dark side of the moon. But a good black level is nothing if it conceals details. Luckily, the 1080 UB displayed excellent shadow details inside the spacecraft – everything from the astronaut faces to instrument panels and equipment displayed very good details. The only shortcoming of the picture that I was watching at this point was the softness of the picture – mind you, not a fault of the projector but rather the limitation of the standard DVD.

Without delay, I jumped to watch several selections on Blu-ray disc. The improvement awarded by this 1080p picture was simply awesome. The drastic increase in sharpness and detail took the picture to a whole new level. Aerial shots of futuristic Los Angeles in Blade Runner showed that the 1080 UB was capable of creating a picture with a convincing depth. Some of the scenes looked truly three dimensional. The same scenes also confirmed the projector’s ability to display respectable black levels. Thanks to the UB 1080’s high contrast ratio, plenty of details were visible in the darkest areas of the picture such as features in character faces and background objects in dark rooms. In outside night shots, the fine details and textures of the buildings were also clearly defined.

Scenes from Casino Royale on Blu-ray again showed how detailed of an image the 1080 UB can deliver from a high definition source. Facial features that are absent in a standard DVD were clearly defined here and resulted in a picture that’s much truer to real life. The skin tones of all ethnicities looked perfectly natural.

By the way, I should mention that the 1080 UB comes shipped from factory with the auto iris turned off. So how does the auto iris influence the performance of the projector? Only one way to find out – I engaged the iris in the projector’s menu and revisited the same chapters of Blade Runner. The most noticeable differences were the deeper blacks and improved shadow detail in both indoor and outdoor scenes. It wasn’t a huge difference but it was certainly noticeable. I found the iris operation to be very quiet. It didn’t disturb me once while watching anything with the volume at a typical level. I also didn’t notice the iris opening and closing while watching movies or playing video games – I only noticed it when specifically looking for it. In other words, most viewers will benefit from the improved picture quality and shouldn’t notice or hear the iris operating.

I also played a little Mass Effect: Bring Down the Sky (add-on) on my Xbox 360 while testing the 1080 UB. Roaming around asteroid X57 in the off-road Mako vehicle was tons of fun but doing it on a big 90-inch screen was a surreal experience. The computer generated environment was absolutely spectacular at times. Case in point – when stopped on one of the mountain peaks, the view of a neighbouring planet had so much depth, it made me feel like I was there. The eerie soundtrack provided by the Sinclair Audio Brighton speakers helped to create the overall experience.

Finally, I should also mention that I was very happy with the 1080 UB’s quiet operation – I don’t recall it ever bothering me while watching movies or playing video games.

If you’re in the market for a sub-$3000 home theatre projector you should definitely put the Epson PowerLite Home Cinema 1080 UB on your short list. For $2969, this projector offers a perfect balance between performance and price. Highly recommended!