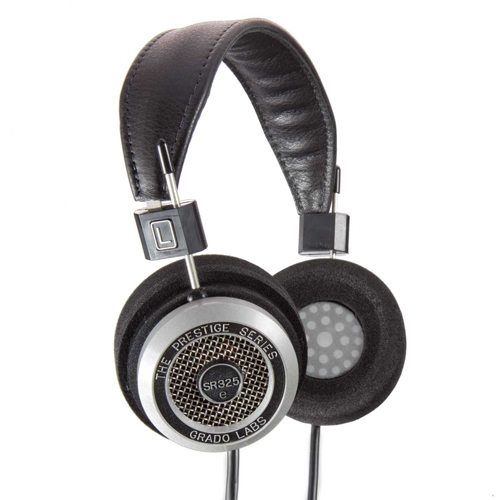 For my evaluations, I used my ADL by Furutech Esprit DAC/head-amp and a MOON by Simaudio Neo 350p.  I also compared the 325e to my Grado SR80 and Focal Spirit One headphones.  In general, I found the SR80 consistently thinner, sounding bleached in comparison to the 325e; acknowledging that my SR80s are a couple generations back and the latest SR80e would surely narrow this gap.  The 325e was significantly weightier and more dynamic than the SR80, yet was also more intimate, drawing me a little closer to the performance.   As well, the 325e was significantly more composed, always remaining in control and easy to listen to regardless of the music, whereas, the SR80 can exaggerate sibilance and even cross over into harshness with some music/volume levels.

Moving over to the Focal Spirit One headphone, it was obvious that the Spirit One was more dynamic and fuller than the SR80 but was no match for the vitality of the Grado 325e.  The Spirit One also had less midrange presence and was less focused and direct than the 325e.  In addition, the Grado 325e was noticeably crisper, clearer and more expressive than the Focal, with overall richer harmonics.
I spent considerable time with the Grado 325e, trying it out will all genres of music, both digital and vinyl but a few tracks are worth mentioning.  First, were some from a Montreal based band named Give, who I was introduced to a several years ago.  Their music is a combination of folk, world, and ambient and is artistic, creative, and enjoyable but also well recorded.  Listening to the self-titled opening track on their Moments album, the 325e showed its proficiency for bass weight and precision.  The taut plucks of strings revealed their tension and dynamic energy without any exaggerated stridency.  Reverb and echo was apparent but possessed that rare warmth you hear from the best transducers.  Yet, it was the drum beats that floored me with their resounding fullness and gigantic size.  The electric bass too should be noted for its masterful weight as well as the elasticity of the strings that the 325e imparted.  On to the track “Given” I was presented with a large and immersive soundstage with remarkable layering.  The Grado 325e was able to produce captivating textures, delicacy and saturated tones from the violins and the guitar, impressing me with their embodied nature – precision and emotion conveyed superbly.  No less impressive was the 325e in its corporeal delivery of Caroline St. Louis and Stephan Ritch’s vocals.  I’ve personally heard these artists perform a number of times, and the authenticity of the Grado’s vocal reproduction was just wonderful.  Yes, there was detail but also wholesome warmth and smoothness, which I especially took note of on Caroline’s voice.  Her breaths, intonations and vocal complexity were rendered in a holistic manner, absent of any unnatural aberrations.  The more I listened, the more I began to realize how non-extroverted the Grado 325e was in its presentation.

Moving to “Fade to Black” from Dire Straits, On Every Street album, I was amazed at just how close the 325e was able to render this track in tone, size and weight to my full open-air system.  Wide open, expansive soundstage and inherent warmth was the overall impression.  The wispy brushes on the drum skins were impeccably detailed and there was a lovely shimmer and sustain to the light cymbal strikes, calling out the silky finesse of the 325e with high frequencies.  The guitar possessed a gorgeous honey sweet tone, while the bass was well controlled but also impressively meaty.  Mark’s voice was delivered in a most intoxicating way, clear, detailed and alive in the flesh.  No doubt here, the 325e has an amazing midrange – wonderful presence, silky smooth with a seemingly perfect serving of organic warmth.

If you’ve been a fan of past Grado headphones, the latest e-Series are a clear move up the musical spectrum, possessing greater tonal colour in combination with increased clarity, adding to musical realism.  For those who have tried past Grado headphones and found them a little too alive in the upper mids and treble, a short listen to the Grado e-Series may finally win you over.  Grado has always had a visceral, alive and exciting presentation, with mesmerizing mid-range presence delivered within a natural open soundstage.  The new e-Series continues to embrace all that Grado headphones have been loved for but now adds another level of smoothness, richness and sonic sophistication.