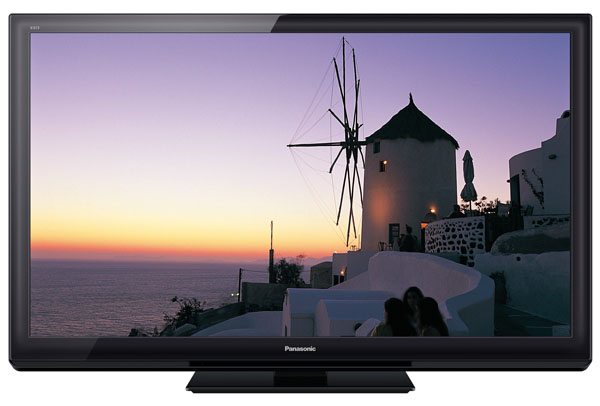 Panasonic is no newcomer to plasma television.  Having developed panels for as long as I can remember, consistency seems to be the company’s mission.  Solid.  Elegant.  Functional.  These three words best describe how I’ve felt about Panasonic TVs from the moment I first laid my eyes, and my calibration meter, on one.  Year after year, Panasonic never disappointed us as it delivered TVs with increasingly better performance.  It was as if to tell us that its goal was to reach the pinnacle of the plasma technology and one day reach video nirvana.  Well, this year Panasonic certainly managed to get closer again.
The ST series represents Panasonic’s line-up of entry-level 3D plasma TVs.  The subject of this review is the 50-inch TC-P50ST30, priced at $1,499.  Being an entry level 3D model, where price is a concern, I wasn’t expecting the TV to surprise me in many more ways than one.  But it turned out I was wrong.

Not straying too far in design from previous designs, this ST series TV is elegantly fitted with a black bevelled bezel.  The result is something less hard and jagged, as even the feel of the plastic surround is somewhat soft to the touch, yet very sturdy.  Weighing in at 57 pounds, the panel feels much lighter than it looks.  With a 5.4 cm thickness, the TV also feels much more robust when moving and mounting compared to large TVs that are super thin.  The front of the TV is clean of controls and the side buttons have moved from the left side to the right side of the TV, and are much less bulky than the large raised buttons of past generations.

The TC-P50ST30 features the VIERA Connect service which can be accessed when the TV is connected to the internet via an Ethernet cable or Wi-Fi (Panasonic provides a wireless LAN adapter with the TV).  The VIERA Connect feature is activated by clicking the VIERA Cast button on the remote, and seems to be a redesign of last year’s VIERA Cast feature.  This service is Panasonic’s attempt to bridge the gap between computers and home televisions, but it does so with less enthusiasm compared to the Samsung TVs reviewed in the June/July 2011 issue of CANADA HiFi.  When reading about VIERA Connect in the user manual and on the company’s website, the information about the technology is fairly vague and uninvolving, and didn’t exactly make me want to explore the feature.  While Samsung’s information on its Smart TV technology was very intense and somewhat overwhelming, Panasonic’s seems to be the exact opposite.  Like other IPTV services, VIERA Connect will allow you access to popular networking websites like Twitter, YouTube, Facebook, Skype, Picasa Web Albums, Cinemanow, Fox Sports, and many others.  You might want to use a USB keyboard to fully take advantage of the offerings here, since unlike the latest Samsung TVs, Panasonic does not provide a remote with a Qwerty keyboard.  So, if networking your television with your computer devices is a priority for you, you may want to explore this feature a bit further at your local retailer.  As in previous generations, Panasonic offers the VIERA Link feature which enables the control of other Panasonic components with the TV remote, as well as the Image Viewer which enables access to content stored on SD and USB devices (connected to the TV) also via the TV remote.

Are there any improvements in image quality this year over last? The ST series TVs follow in the footsteps of last year’s G series TVs when it comes to black level.  This TV has the Infinite Black 2 panel which uses a filter to keep black levels low.  The black level does not measure as deep as the top-of-the-line VT-series, but it’s better than the comparable Samsung 6 series.  The depth of black (darkness of video black) can be noticed in a dark room with all three panels displaying the same image, but is a bit more difficult to spot when on their own.  To tune the picture, the TC-P50ST30 offers five image presets to select from, depending on the room environment in which you watch the television.  All picture modes can be adjusted to a certain extent, with only two modes, Custom and Cinema, which can be calibrated for greater accuracy.  The TC-P50ST30 also has true 3D capability with compatible Blu-ray and satellite/cable TV signals, although you will need to purchase the 3D glasses separately.  This is one way to keep the pricing down of a 3D TV set.

To improve 3D picture quality by reducing crosstalk between images (crosstalk is the term used to describe seeing double images when wearing the glasses), Panasonic has created a crosstalk canceller to minimize the double images.  Emission time and process of the phosphors have improved this year to minimize left eye – right eye frame interference.  In addition to this, the new panels have fast switching phosphors to reduce what we call image decay or afterglow, which can result in images staying on the screen for a fraction of a second too long and thus blurring fine detail.  Since each pixel on the screen is made up of three subpixels (red, green, and blue), the speed of their rise and decay time (getting brighter and darker) is very fast with Panasonic’s 600Hz subfield drive technology and will, with the other technologies listed above, improve the clarity of moving images.

Knowing that good quality video switchers have rapidly penetrated the A/V receiver market for connection of multiple sources, Panasonic has slimmed down its video input offerings and justifiably so.  The TC-P50ST30 provides 3 HDMI, 1 component video and 1 composite video inputs, 2 USB, an SD cart slot, and an optical output to access 5.1 audio from over-the-air broadcast (I’m still one to use this last feature).  There is also an Ethernet port for connecting to a home network.  The selection on the panel is less cluttered and more practical for modern-day components.

I should also mention that Panasonic is trying to be environmentally responsible by offering mercury and lead-free panels so that when its time to retire the TV, the environment won’t take a beating like it has with CRT televisions.  While plasma TVs tend to be a little more power hungry than their LCD rivals, Panasonic offers a variety of power saving features in its plasma TVs that can save on panel life and hydro bills.  To give it power, the TV includes a large detachable power cable that could be replaced with a high-end cable for improved performance.

I spent most of my time evaluating this TV uncalibrated as most owners still don’t get their TVs professionally calibrated.  So, out of the box how does it look?  Panasonic TVs come out of the box set to the “Standard” image preset.  The image is dark, dull, crushed, and displays massive amounts of dithering in dark areas of the picture (dithering is graininess in the picture due to a reduction in colour depth).  Changing the picture mode to “Custom” or “Cinema” got rid of the problem quickly so I was off to watch some Blu-rays.  Evaluating at a 7 foot distance to take full advantage of the 1080p resolution, the first title I watched was the most recent interpretation of Red Riding Hood by Twilight director Catherine Hardwicke.  This is a title that I know has a solid video transfer; it’s very clean and the look of the film with all of its obviously fabricated sets has some visual appeal for what it is.  While the TC-P50ST30 can’t improve the dreadful story itself, the Panasonic delivered the image strongly and impressively.  Amanda Seyfried’s skin looked very polished in each scene as she plays Valerie, the Red Riding Hood.  In the Cinema picture mode, colours are much closer to HDTV spec, and the image looked very smooth and pleasant when compared to the Custom picture mode (the latter has its colours a little bright and oversaturated as evidenced on Valerie’s red cloak).

To test the TV’s black level capability and interpretation of film grain, I switched to one of my favourite classic sci-fi horror films, Ridley Scott’s Alien.  When the crew sets out to explore the alien spacecraft, the scenes are contrasted with dark interiors and bright hand lights.  The Panasonic did not stumble when reproducing the low level detail along the intricately created walls, otherwise known as shadow detail.  Much has gone into the set design of the film and it would be a shame to not see the alien environment we were intended to see.  20th Century Fox maintained the film grain for this transfer and I felt that the Panasonic reproduced it well, something that is typically a shortcoming of plasma displays.  I then skipped ahead to the climax of the film when the ship’s strobe lights flicker during the self destruct sequence.  No matter the intensity of the flickering light, the Panasonic was very stable in holding its black level and low light detail – a very important trait for any TV to make a good picture.

The last film I watched was The Assassination of Jesse James by the Coward Robert Ford, a transfer that I know has problems with frozen grain.  The TV’s noise reduction feature can smooth out some unwanted artefacts such as what is on this film, although as a purist I don’t recommend NR features, and I don’t think ladies watching this film would want any video circuit obscuring any part of Brad Pitt who plays the villain James.  The TV was no coward hiding the problems with this video transfer, so not only will you stay in suspense with the intense dialogue sequences in this film, the Panasonic will show the video as is, warts and all.

As there are upsides, there are downsides.  The Motion Smoother feature is still dizzying to watch, so while it does reduce motion blurring, it still looks too much like a home video and destroys the feel of film.  The dithering can be quite a nuisance especially when sitting at close distances.  The Red Riding Hood transfer does have one drawback: a raised black level.  The film’s deepest black is slightly higher than that of the TV, so the TV reproduces it as dark gray.  Dithering tends to happen in the darker grays the most as there isn’t much colour detail there.  There were times where I found it more offensive than I preferred, but not out of line when compared to other panels found at the same price point.  As a result of Panasonic’s processing, some colour banding could be noticed as well, as I saw it several times on Amanda Seyfried’s cheekbone in the warm fire-lit environment, the scene when she first kisses the bad-boy of the village, Peter.  The smooth shades between subtle colours just weren’t there and resulted in some posterization.  For those interested in viewing the calibration data for this television and a further discussion on its gamma performance, please visit the CANADA HiFi forum at novo.press/forum and click on the Plasma Flat Panel Displays forum.  Unfortunately I could not evaluate 3D image quality as Panasonic did not provide 3D glasses with the review unit.

It seems likely that “stay the course” is Panasonic’s internal slogan when developing its 2011 panels.  While the high amount of dithering can be forgiven at further viewing distances, I’m still impressed with the solid and well built displays when compared to the thin and fragile-feeling competitors.  Offered in six different sizes from 42 up to 65 inch, the ST series televisions offer excellent value; full 3D compatibility, deeper black levels, accurate colours in Cinema picture mode, and a solid design.  This is a TV you would be comfortable watching for a long time ahead.