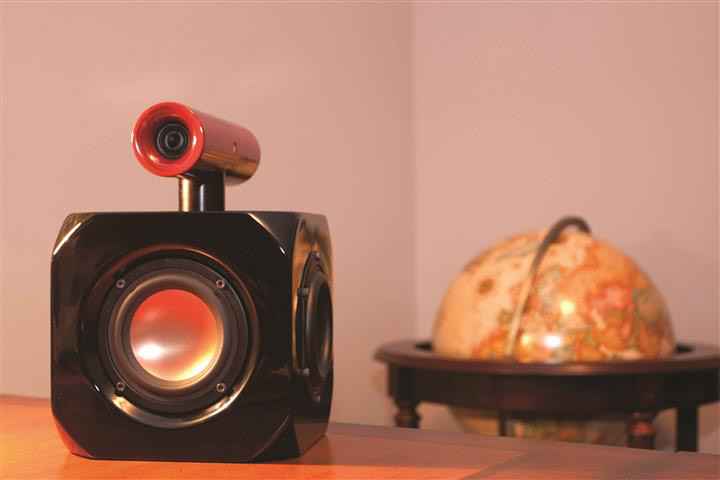 Adsum Audio is a relative newcomer to the speaker market, having released their inaugural speakers, the Detonators, in April of 2013. Founded in 2009 by James Osualdini and winner of the 2011 Hatch Business Plan Competition at the Northern Alberta Institute of Technology, the Canadian company based out of Edmonton, is aiming their products at consumers that are making the transition from the lo-fi market (read: MP3s and overly processed portable audio) to the hifi space and are looking for quality speakers at a reasonable price. As such, a pair of Detonators has a budget-friendly MSRP of $849 CAD, with free Canadian shipping, direct from Adsum Audio’s website.

The compact speakers, resemble a pair of dice with their cubed shape and triangular tapered corners, except that on top of the cube houses a tweeter, connected by a small circular column. Measuring 183 x 183 x 265 mm (L x W x H), the main cabinet features a 100mm / 4” woofer made with a combination magnesium / aluminum cone while the tweeter above it is a 19mm / 0.75” dual-ring radiator. Frequency response is 65 Hz – 40 KHz (± 3dB), with a sensitivity of 85 dB (2.83V/m), and nominal impedance of 8 Ω (minimum 2.9 Ω). Recommended power to drive the pair is 20 – 120 W. On the left and right sides each, are 100mm / 4” passive paper cone radiators, which eliminate the need for a port tube for the woofer. From the sides, the speaker looks like the plunger-based trigger for an explosive device and hence the name – the Detonator. The bottom cabinet comes in a choice of glossy white or piano lacquer black. The tweeter can be finished similarly to the woofer cabinet or for an extra hit of colour, in additional choices such dark plywood, red, metallic copper, or lime green. A special edition with the tweeters finished in carbon fiber is also available for $1,100 CAD/pair. Each speaker weighs just 3.5 kg and comes with a 5-year warranty.

With the intention of getting “everyone into audio,” the Detonators are advertised as being “flat” and not taking away or adding to the audio. Fortunately, with the increased availability of hi-resolution lossless audio as well as the resurging popularity of vinyl, it looks like Adsum Audio will have a burgeoning new audience for their products and one can only hope that upon hearing music accurately reproduced, the new listener can appreciate the purpose of accuracy over thumping bass.

Setting up the speakers, they melded in nicely on top of my dark wooden cabinet, with the plywood tweeters and slightly iridescent, exposed gold woofer cone adding a subtle accent.  Their compact dimensions and attractive styling should allow them to blend easily into just about any space.  Thanks to their unique cabinet design, they are sure to become a great conversation piece with family and friends.  After putting them through a 24-hour burn-in period (made up of a weeklong period of 4-hour sessions), as recommended by the small instruction booklet that came with the speakers, the speakers were ready to be put through their paces.

During the review, I used an Adcom GFP-555 preamplifier, along with a Classé CA-201 amplifier.  I started by playing tunes from my computer through an Audioquest DragonFly v1.2 DAC as well as a a Classé CDP-502 CD player.

Queuing up Jack Johnson’s “From Here to Now to You” (2013), the first test would be Jack’s voice and acoustic guitar playing. Most of the album has only a few instruments and a single vocal lead, making it a good album to start off with so that each individual element can be honed in on. Listening to “Washing Dishes,” the Detonators were able to distinctly showcase the single melody notes of the lead guitar next to the accompanying chords of the second guitar. The spacing of the melody wasn’t as forward as with larger speakers capable of a deeper soundstage but the fact that the spacing wasn’t lost was a good start. The hollow tapping of Jack’s hand against his guitar’s body was also pleasantly subtle. Moving onto “As I Was Saying,” the addition of the soft piano fills in the background at the rear of the stage but its soft melody was often absorbed by the guitar chords, starting from the piano but not having the strength to be able to make it all the way to the listener. The Detonators fare well when the instruments are within a similar range in volume with each other.  However, as the volume range increases – for example when one soft background instrument is playing and a louder melody line or secondary chord line comes in – things start to get a little muddy. While the softer instruments are audible and their notes are recognizable, their location on the stage gets somewhat lost. The clarity of Jack’s voice carries through and while slightly dry doesn’t verge on harsh – and that’s a good thing.

Continuing on with an album with a faster pace, I loaded up Lindsay Stirling’s “Shatter Me.” While this album is mostly based around a string instrument (mainly violin), it is accompanied with other orchestral instruments and electronica. In “Beyond the Veil,” Lindsay’s violin takes centre stage and the vibrato is nuanced and reverberates fluidly, if somewhat grainy. As her bow skips from string to string, the friction on her bow is clearly present. Between the quick flourishes, the long notes hang in the air before quietly fading off. Onto the title track “Shatter Me,” the striking of the tone bars on the xylophone ring out with excellent purity and are soon joined by Lizzy Hale’s vocals. In this track, the percussion in the background makes the soundstage shallower than with previous tracks, but almost makes up for it by sounding wider. Next up, “Roundtable Rival” reaches the bottom limit of the Detonators as the stomping gets washed out and starts to sound raspy.  To be fair, given the compact dimensions of these speakers and their 4” drivers, no one should expect them to play very far into the bottom frequencies.  To achieve a fuller range sound, you should definitely pair the Detonators with a subwoofer and Adsum will have this covered soon with its upcoming C4 and Ivan subwoofers.  Stay tuned for a review of the Detonators along with one of the subwoofers in a future issue of CANADA HiFi.

Lastly, I queued up Metric’s “Fantasies,” the album I also used when reviewing the Paradigm H15NC headphones. Spinning up “Gold Guns Girls,” I heard similar imaging as with “Shatter Me”. The various instruments are distinct due to their similar volume and the soundstage is a little shallow. The addition of percussion instruments such as snares, cymbals, and tambourine compete with and ultimately eat up some of the smokiness of Emily’s voice. In contrast, with “Gimme Sympathy,” Emily’s voice has more separation from the band as if they’re now standing further to the sides, giving her vocals more room to stand out. Listening to the various instruments, including the theremin and maracas, the former sounds slightly metallic while the latter’s unique rain-like sound is preserved above the stronger instruments such as the electric guitar. This is shown again with “Collect Call” which starts off with fewer instruments, allowing Emily’s voice to better shine and restoring the lushness back. As the instruments carrying the melody are much lighter, only playing the melody softly, separation is again restored and widened.

As a final test, I connected the Detonators in place of the front left and right speakers in my Paradigm MilleniaOne 5.1 channel setup (reviewed in a past issue of CANADA HiFi, earning Editor’s Choice as a surround sound setup) powered by a Pioneer VSK-1326-K receiver to see how they would make out. Jumping to some battle scenes in the Pacific Rim on Blu-ray, the clash of metal on metal was sharp without being harsh and being able to offload the lower frequencies to a dedicated subwoofer helped to alleviate the strain from the Detonators, allowing them to focus on the wind, waves, and grinding mechanics of the giant robots. Here again, the stage is sufficiently wide but not adequately deep enough to represent how vast the ocean is in the scene.

Overall, the Detonators provide a clear and often nuanced sound, capable of showing off the rich details present in many instruments.  If you prefer to listen to sound the way it was recorded, rather than a version that’s altered by the speaker (something that’s common with too many smaller speakers in the market), then you’ll appreciate the Detonators.  These are speakers that excel with solo artists accompanied by a small band or movies with lots of detail carried by a handful of actors and props. The more that gets added in either musical performances or special effects, the quicker things start to sound congested and flat. When bass duties were offloaded to a subwoofer, the Detonators were able to redirect their energy into the midrange, offering a more effortless performance. My listening tests showed that the Detonators are able to provide a wide but frequently shallow soundstage.

I came away impressed by the tonality of these compact speakers. Given material that isn’t too crowded or busy, the Detonators are smooth, sweet, and not too bright. For a pair of speakers under $1,000 CAD, they performed admirably and should help many transition into the world of hifi audio without breaking the bank.