Burmester 101 Integrated Amplifier and B10 Loudspeakers: Living in Luxury 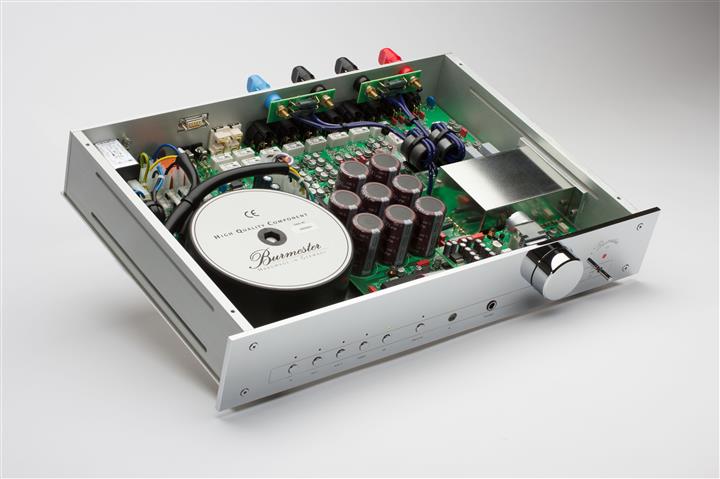 Soundstaging was wall to wall and disproportionate to the speaker’s modest size, populated with precise images in the left to right as well as front to back plane wherever the recording allowed. Image height and size followed suit, being recording dependant, but never resorting to over precise miniatures. Paired with its tonal attributes, the speaker was capable of full blooded, warm images in a dense acoustic.

One technical characteristic that worked to the B-10’s advantage was directivity. This design decision not to pursue ultra wide dispersion resulted in less side wall interaction and therefore considerably more precise imaging. It also gave the speaker greater flexibility in listening distance, performing consistently whether in near field or far field use in the context of my 12 foot by 17 foot room. The one penalty for this large, unadulterated sweet spot was a somewhat less composed off axis response. This should not constitute an issue for anyone within a normal listening situation, so consider it purely an observation of legitimate engineering tradeoffs.

At this point, it became time for the 101 integrated to enter the scene. To keep it as much a Burmester family affair as possible, I switched over to a pair of Burmester speaker cables that were also sent along in a rather attractive instrument case, spade terminated of course. The Wyred 4 Sound Server and DAC2 remained as source and I switched between Audio Art balanced and Arkana Physical Research Exquisotor asymmetrical interconnects with and without Burmester adaptor plugs between 101 and DAC. Hook up was quick and easy, and the binding posts were ergonomically positive in feel and grip. The shrouded XLR/TRS phone combo jack was new to me, but quickly proved itself practical and pretty much foolproof.

The 101 integrated and B10 were an excellent match from first power up. The slim line amp immediately demonstrated that its rated 120 w/4 ohms specification was both extremely robust and quite conservative. The 101/B10 combo indeed had dynamic wings to fly with superb control and quite high sustainable volume levels. The pair were unafraid of musical challenge, either uncompressed audiophile fare or bouncy pop. Confronted with some fun bombast like Christopher Drake’s “Main Titles for Arkham Origins”, discovered during my Tidal streaming service explorations, the system had the ability to startle with intense, abrupt dynamic swings. The two could also switch gears in an instant and play the refined couple with delicate low level material. The dynamic floor was extremely low, affording an intensely lively presentation by widening the available range of dynamic contrast. The only proviso was that the 101 required a minimal volume level to reveal it‘s muscular glory. Past that point it was no holds barred.

The tonal balance showed where Burmester’s heart lies. Natural warmth and body were in ample evidence from the 101 and any potential argument regarding sterility or bleaching of the upper registers in class D amplification were quickly nullified. The implementation here was bona fide High End competitive, tubular in some respects with SS control. Matched with the responsive capability of the B10, music was warm, dimensional, and exceptionally detailed, without resorting to the exaggeration or hyper detailed excess.

The practical useable lower frequency limits into the mid 30s (in my environment) of the speakers fit hand and glove with the combination of warmth and control that the 101 could deliver, making for a compact setup that could deliver authority and dynamic nuance within those boundaries. The majority of acoustic music and popular fare were well served, so for many people the bass extension will be sufficient not to necessitate the addition of a subwoofer, but those accustomed to true subsonic performance or demanding more visceral clout, may prefer to seek a little higher up in the Burmester speaker line.

I experimented with the “Smooth” feature on the 101, but my results were mixed. The contouring boost afforded by its engagement shifted emphasis into the lower registers, but while this normally may be useful for lower volume levels, or recordings mixed with an over aggressive top end, it didn’t work to advantage here. My room match without its use was good enough to keep the sound bold and alive at quieter levels, and I could find no recording bad enough to warrant, so in the end, it was left disengaged.

Imaging was accomplished with refinement and style. The pair went for big and bold in soundscape, with precise and focused individual images. Burmester has opted for an “engineering neutral” status here, with neither excessive depth or forward projection, yet without being deficient in either regard. The key here was a consistency of focus in all planes which preserved the intent of musical content. This demonstrated the true nature of the B10 as a legitimate studio monitor where the design goal is to faithfully reproduce the recorded information , not impress with a diffuse and bloated soundscape that does not reflect the original material. For a recording engineer, truth is preferable to a pretty lie.

Different systems handle the characteristic of “air” in regards to hall information and the cushion surrounding an instrument in dissimilar fashion. Some permanently light up the acoustical information of the hall. Others create a darker, denser environment which only lights up when an instrument plays and interacts with the venue acoustics. The Burmester falls into the latter category and coupled with its low dynamic floor could unravel complex cues with richness and energy. Well produced acoustical material or well engineered artificial soundscapes were dramatically reproduced. Indiscriminate pop hash overlay was laid bare for what it was.

I gave the 101 some headphone time with the audio-technica ATH-W1000 Sovereigns, the audio-technica ATH-M50s and the Hifiman HE-400s (with an Audio Sensibility upgrade cable). Why did I choose these three from the stable? Each represents very different design choices. The M50 is a “pro” monitor, the W-1000 simulates a speaker soundstage by angling drivers, and the HE-400 is a comparatively hard to drive planar design. Tonal balance and character on all three benefited from the Burmester philosophy of warmth with high resolution, but the challenge revealed definite differences and some limitations. The M50 proved easiest of the batch to handle and was fast on its feet with wide dynamic range and deep bass. Second was the W1000 which did in fact produce a superior “head stage” while losing surprisingly little to the M-50 in terms tonal balance and dynamics. The planar however, pushed the 101 much harder, requiring a higher volume setting, sacrificing bass extension and flattening dynamic contrasts. The integrated showed a distinct preference for more conventional headphone design, so since the HE400 is considered one of the more forgiving of its breed, the purchaser will have to make appropriate choices or consider adding a dedicated DAC/Pre for optimum results.

That marks the end of the microscopic scrutiny demanded by the listening descriptions. Now it’s time to determine what the end user can expect of the 101 integrated and B10 in holistic terms. The speakers are energetic, high resolution devices that would allow any engineer to make critical decisions, and they manage to achieve that end without sacrificing accurate tonal balance or resorting to exaggerated emphasis. That style of true accuracy affords maximum musical enjoyment without performance penalty. The 101 integrated marks an auspicious introduction for Burmester’s implementation of Class D technology. It takes full advantage of the responsiveness and tubular dimensionality this approach brings to the table and marries it with superb tonal warmth, especially in the upper frequencies. Although it may not be the most powerful amplifier out there in absolute terms, the quality of the power supply keeps it dynamically robust far beyond the basic numbers. Properly paired with appropriate speakers, it will deliver the goods. In both cases, the prospective purchaser should keep in mind that these two components are obviously not designed to fill a stadium with prodigious levels of sound. They are intended to meet the needs of a smaller, more intimate venue. In that context, they will perform with distinction, achieving surprisingly high levels of resolution, dynamics and volume, all accomplished with finesse.

That brings us finally to the system approach. Audiophiles often pursue a piecemeal methodology to assembling components, and while a skilled set of ears can put together an excellent combination, it amounts to the equivalent of a mix and match wardrobe. For those who have neither the time or the inclination to experiment, Burmester has a rather attractive musical stable of equipment at the ready, fully matched right down to cables, and therefore able to provide predictable and repeatable results. Many will find the availability of a guaranteed single brand solution a serious advantage to consider.

Burmester has earned a solid reputation over the long years as a prestige High End audio firm. These two offerings uphold that tradition by infusing smaller form with the company’s signature warmth and emotional dynamism, and while hardly inexpensive, these Burmester products are built to highest musical and technical standards to ensure very long lasting satisfaction. It’s tough to go wrong with an established status symbol.