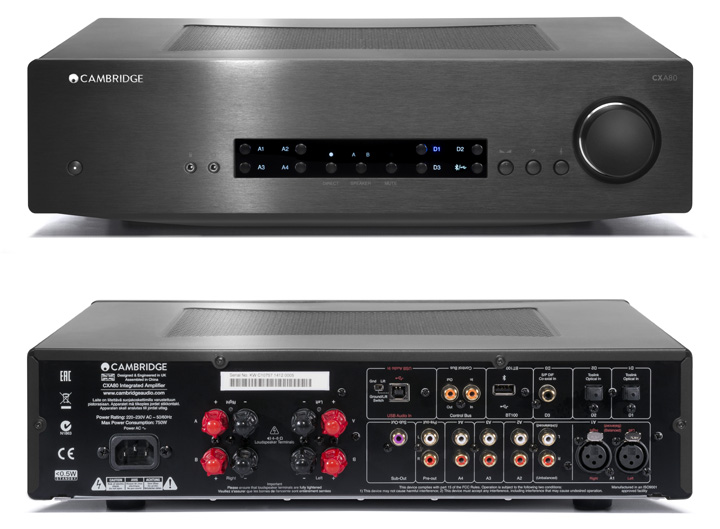 CXA80 Solid State Integrated Amplifier
The CXA80 I reviewed also came with a black, brushed aluminum faceplate. The volume control sits to the right side. Push button selector switches for the unit’s inputs are located within the center rectangular display.

There’s also a ‘Mute’ button to silence the beast and a single button to select which pair of speakers are in use: speaker pair A; speaker pair B; or both pairs A & B simultaneously.
The CXA80 has three tone control buttons: treble; bass; and left channel / right channel balance. Press a tone control button and it will ‘pop’ out about a 1/2cm. Once ‘popped’ outwards, turning each button clockwise or counter-clockwise results, respectively, in increasing or decreasing the treble, bass, or left/right channel balance. There’s also a ‘Direct’ mode button which bypasses all of the tone controls.

On the left hand side of the front panel, there are two 1/8” (3.5mm) jacks: one is a headphone output; the other is a line input for listeners with mobile devices not equipped with a wireless Bluetooth feature. Users who wish to connect to the CXA80 via the Bluetooth option will need Cambridge’s ‘BT100′ receiver.

The CXA80 can be connected to everything in higher-end digital audio that currently exists. The only thing it does not come with is an onboard phono-stage for MM or MC cartridges.
The top cover of the A80 has a honeycomb vent which allows the amp to dissipate heat. Here again, the “cool” factor of being able to see the toroidal transformer, the heatsinks, and the internal circuit boards inside of the unit is fantastic. With the room lights turned off and the front panel lit-up, the amp’s innards glowed in soft blue light.

Digital code can be processed from TVs, network streaming devices, and CD, DVD/Blu-ray players. Users can also connect any Bluetooth equipped device to the CXA80 via Cambridge’s optional BT100 dongle for access to aptX high-quality streaming. The amp even comes with an RCA subwoofer output.

For music enthusiasts who have a large collection of digital files, the CXA80’s USB-B input allows them to connect directly to any PC or Mac computer.

The unit features a 24bit/192KHz Wolfson WM8740 DAC, so a user can plug just about any device that can send a digital signal directly into it.

Germane to the high calibre of the parts used and its dual-mono circuit design, build quality of the CXA80 is extremely high. Fit, finish, and even the packaging of my review unit were all excellent.

With all of these speakers, the CXA80 generated fast transients, superb transparency in the mid-range, and decent low-level detail retrieval. It also produced natural warmth in the mid-bass and lower registers.

Overall, I’m happy to report that the CXA80 competes with many solid state integrated amps in the $3,000 to $4,000 retail level. This is the first time I’ve ever encountered non-fatiguing highs, engaging midrange, superb timbral accuracy, and smooth PRaT anywhere near the $1,399 price.

My editor suggested that I compare the sound quality of a $1,500 level CD player to that of ripped FLAC files played through the CXN and CXA80 combo.

I first listened to The Who’s Who’s Next album [Polydor 527 760-2]. With the two different set-ups connected to the CXN via its S/PDIF and USB digital inputs, the sonic differences between ripped FLAC files and CDs were so negligible that I couldn’t consistently tell them apart.

When I bypassed the CXN and connected the Azur 840c / Nordost Heimdall-2 S/PDIF straight into the CXA80, the sound quality was noticeably better. I heard a clearer separation of Pete Townsend’s acoustic guitar accents from his electric guitar chords and solos. I got goose-bumps from listening to the power of Roger Daltry’s vocals. Similarly, the subtle, lonely, and emotionally distraught sound of Townsend’s tortured voice was also much clearer without the CXN in the signal path.

On tracks like ‘Baba O’Riley’, ‘Bargain’, ‘Love Ain’t for Keeping’, ‘The Song is Over’, ‘Going Mobile’, ‘Behind Blue Eyes’, and ‘Won’t Be Fooled Again’, I consistently found that these songs sounded more lifelike and organic when using the Azur 840c / CXA80 combo than with the laptop / CXN set-up.

Many audio reviewers rely on Hope [Artemis Tri CD 8202] to test whether a 2-channel system can accurately recreate the layered soundstaging, explosive dynamics, and timbral sheen of the wide variety of instruments used on this recording.

Performed live in Washington DC at the Blues Alley club in 1993, Hope features an array of songs from Masekela’s 40 year career as a jazz musician. Highlights include versions of ‘Mandela (Bring Him Back Home!)’, ‘Grazin’ in the Grass’, and the energetic ‘Stimela (The Coal Train)’.

Listening to the track ‘Stimela’, Masekela passionately chants about the plight of migrant African labourers who were conscripted from all over southern Africa and brought to work, (often against their will), in deplorable conditions in gold and diamond mines near Johannesburg, South Africa.

Masekela’s violent vocal shrieks, his grainy gurgling voice, and the explosive drumming and percussion work on this track will challenge any amplifier’s capacity to reproduce dynamics, PRaT, and layered harmonics.

‘Stimela’ also has an amazing soundstage. The CXA80 clearly separated and delineated crowd noise from the array of on-stage instruments. The amp created a musical cohesiveness that drew me into the soul of the music. Sonic images were precisely defined, layered, and three dimensional. The Azur 840c / CXA80 system communicated the impassioned emotion of the music with remarkable realism and vigour.

Germane to its $1,399 price tag, Cambridge’s CXN provides excellent sound and infinite connectivity. If I was looking to buy a superbly engineered upsampling network streamer, the CXN would be at the top of my ‘Short List’ of components to audition. The one caveat with the CXN is this: to sound its best, this beast needs to be fed a high quality hi-rez digital signal.
Cambridge’s CXA80 solid state, class A/B, integrated amplifier produces a sound quality that I’d expect to hear from amps in the $3,000 to $4,000 price range. Is there another integrated amplifier currently available that offers such a high quality of sound and has so many connectivity options anywhere near this price? No… there isn’t.

For the money, the CXA80 must be considered a “reference” level component, because nothing I’ve yet encountered even comes close to delivering its amazingly good sound while providing so many usage options.