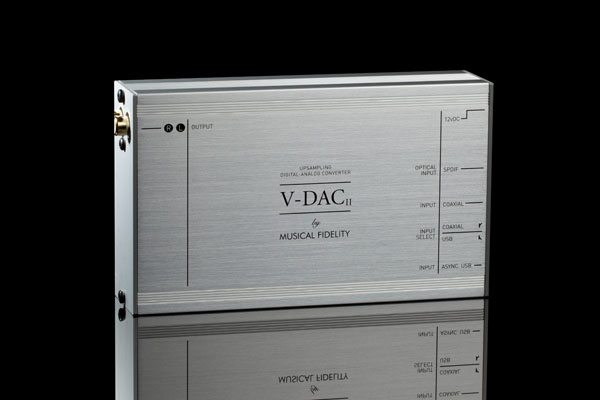 As a civil design engineer, many years of formal training and work experience have conditioned me to look past the flashy facades and to focus on the important parts of the building like the foundation and superstructure. Not surprisingly, I also use this sort of logic when it comes to influencing my choices in hi-fidelity audio components. When it comes to audio reproduction, I am always willing to sacrifice the ease of use and the aesthetics of a component for better sound. During my search for a new DAC and while researching the various USB capable models a few months back I came across the Musical Fidelity V-DAC. There are many reviews for the V-DAC and the general consensus is high value with less than pleasing aesthetics. This really should come as no surprise as the design of the V-DAC was described by Musical Fidelity as being analogous to that of a Formula 1 race car – a focus on what is under the hood with no excess or wastage anywhere. That sort of design philosophy is music to my ears and the V-DAC seemed like just what I was looking for so I contacted to Musical Fidelity to request a sample for a test drive. Musical Fidelity responded with what at the time seemed like bad news – sorry we are all sold out of the V-DAC. About one month later the good news was realized, Musical Fidelity had released the follow-up model, the V-DAC II and a sample was on the way! This was excellent news and I was eager to read up about the updated model and the new features.

The Musical Fidelity web page for the new V-DAC II noted in the design background that “When the original V-DAC was launched three years ago, it got excellent reviews. The technical reviews, in particular, were outstanding, and the V-DAC proved to be popular with music loving audiophiles. Most competent reviewers realized that the V-DAC was the technical equal of other DACs up to ten times the price. The only real criticism was about its appearance.” With that in mind Musical Fidelity set out to update the V-DAC by improving the appearance and finish of the chassis, updating the standard USB input to an asynchronous USB port and improving the technical performance. While I’m sure there are many that are pleased with the upgrades to the finish of the enclosure, I’m excited about the asynchronous USB port. I’ve had the opportunity to live with the V-DAC II for about five weeks now and I’ve put together this review to share my experiences.

Apparently when it comes to hi-fi products, looks do matter and Musical Fidelity has responded by replacing the flat black enclosure with a new shiny, brushed aluminum extruded chassis. The white flashy lettering has been replaced with a typical font that does not stand out. The silver V-DAC II measures 170 x 95 x 40 mm (about the size of a 3.5″ external hard drive) weighs about 350 grams, feels solid and appears to be well built. On the bottom there are two rubber feet that run the length of the enclosure. The audio output from the DAC is via one set of RCA outputs located at one end of the enclosure. The digital inputs are located at the opposite end and consist of a USB (type B) port, an RCA (coaxial) and a S/PDIF (optical) input. There is an input switch which will allow you to select the input mode between either USB or optical/coaxial. The switch itself is very small and located in between the USB and coaxial inputs. With both inputs in use some may find it a little difficult to get their finger in there to flip the switch. There are two LED indicators, a cool blue for power and a light green to indicate a digital signal lock. Power to the unit is provided by an external 12VDC (500 mA) wall wart power supply included with the DAC. There are no power controls on the DAC or the external power supply. The stock wall wart power supply can be upgraded with the Musical Fidelity V-PSU II ($249 US). All the connections and controls are labeled on the enclosure. The input selection switch is marked as selectable between USB and coaxial, but it actually selects between either the USB port or both the optical and coaxial inputs. Under the hood of the V-DAC II is a Burr-Brown SRC4392 stereo, asynchronous sample rate converter and a Burr-Brown DSD1796 stereo DAC (24-Bit 192 kHz). The quality CMOS chips confirm that the focus of this DAC design has been on the insides. The specifications indicate that the V-DAC II will upsample to 24-bit 192 kHz. The USB input will accept asynchronous data streams up to 24-bit 96 kHz. The maximum output signal is 2.2V. The noted specifications are excellent and further improved from the earlier model. Across 20 Hz to 20 kHz the response is noted as +0/-0.1 dB, THD (total harmonic distortion) is 0.004 % and the SNR (signal to noise ratio) is -117 dB. 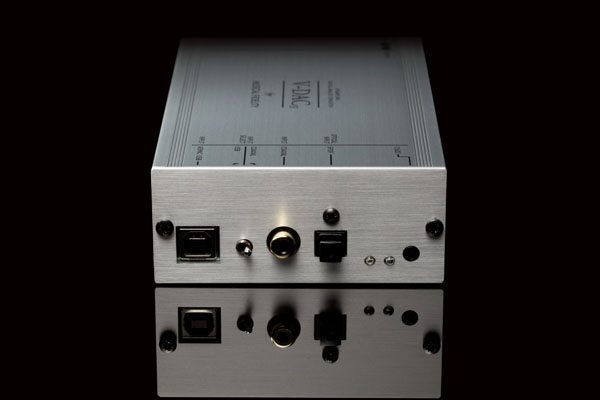 Set up of the Musical Fidelity V-DAC II is very simple. The RCA outputs connect to the analogue input of your preamplifier / integrated amplifier / headphone amplifier. I connected to a NAD C162 preamplifier which drives a pair of OddWatt Audio KT88 monoblock amplifiers. Since there are no power controls on the DAC itself, I used the switched AC outlet on the preamp to control power to the V-DAC II. I tested both the coaxial and optical inputs with an Oppo BDP-83 Blu-ray player. I connected a laptop with Windows 7 to the USB and did not experience any software setup issues. I also tested the V-DAC II on a PC with Windows XP and again there were no software issues. Once the DAC was powered up and the USB input was selected, the Windows operating system automatically identified and installed the DAC as new computer hardware. All computer audio was now directed towards the DAC and playing music was as simple as launching the media playback software (foobar2000 in my case) and hitting play. I started with an album called Getz/Gilberto by Stan Getz and João Gilberto (Verve Records, 1963) available from HDtracks as a 24-bit 96 kHz digital download ($17.98US). While this is an older recording, the chart topping jazz album (featuring excellent saxophone, guitar and piano) is a great choice to break in any new piece of equipment. Using the USB input, the output level from the DAC can be controlled on the computer. Further listening included my only 24-bit 192 kHz album, Mozart in Vienna with Gottlieb Wallisch on piano (Linn Records, 2010, £18.00). Playback was flawless even though the USB input is limited to 96 kHz, I assume the data is down sampled on the software side. I enjoy big warm tube audio sound and I really enjoyed the neutral sound from the V-DAC II. I found it to be airy, crisp and rich with fine details. Some digital converters sound too hard and sharp to my ears and that kills the emotion of the recording. Using the DAC with a computer is an enormous and obvious sonic upgrade over the audio quality using the computer internals. Armed with CDs of The Beatles “Love” (EMI, 2006) and The All-Time Greatest Hits of Roy Orbison (MFSL, 1972, 2008) and using the Oppo BDP-83 I made direct comparisons between the on board DAC and the V-DAC II. Switching between the two really emphasized the extra air, space and detail that is present when listening through the upsampling V-DAC II. Overall I found that the V-DAC II had a neutral yet pleasant sound that was accurate and rich with details and emotion.

Having used the updated V-DAC II by Musical Fidelity for over a month now, there is no doubt in my mind that the success of the earlier model will be matched and exceeded. The improved model uses the latest digital technology, delivers excellent sonic performance and is wrapped up in a functional and trim package, all with a modest price tag. The V-DAC II can be used to fill many roles such as upgrading the aging digital end of your old CD player and to integrate your computer with your hi-fi system. With a retail price of $349 US and considering the multiples uses and the high level of performance that is delivered, there is excellent value for the money here. While you may develop your first impression based on the new appearance of the V-DAC II, it’s the performance and excellent value that will make the lasting impression.