OLED – The Next Revolution in TVs: The Benefits of OLED TVs and Who’s Making Them

At the moment, there are two streams of OLED technology. On one hand you have the RGB OLED, which, like plasma, has separate red, green and blue sub-pixels. On the other hand we have the white OLED or WOLED where the red, green and blue light generating materials are sandwiched together. When powered up, this sandwich creates a white light, which is then passed through a colour filter to create the red, green, or blue sub-pixel on the screen as required. Take a look at the image below showing the difference between these two approaches.

This begs the question: Why use the RGB generating materials to make white light and then turn it back into the desired colour? The proponents of WOLED claim that the sandwich method significantly extends the panel life and minimizes colour shift when compared to the RGB OLED method, while making it easier to scale to different screen sizes and also to 4K resolution. It is also, apparently, cheaper to produce the WOLED configuration as compared to RGB OLED.

When compared to LED/LCD TV sets, OLED TVs have other advantages. They are a bit brighter than LED/LCD TVs and when you turn up the set to maximum brightness, it has less impact on the lifespan of the pixel. OLED technology also offers a greater viewing angle and wider colour space which means that it can reproduce more subtle and nuanced colours for a more dazzling spectrum. OLED’s faster response time also helps reproduce fast moving action with less motion blur and artifacts. In comparison to plasma, OLED suffers from less screen burn-in which was quite an annoyance.

In terms of life span, LED/LCD sets still have the upper hand because of the fact that the blue organic material used in OLED panels tends to degrade faster than its red and green counterparts. When that happens, it throws the image colours out of balance. Some manufacturers have tried to transcend this hurdle by using blue material that is twice the size of the red and green material and then reducing the amount of voltage applied to it to try and extend its life. The jury is still out on whether this strategy will work.

When it comes to aesthetics, OLED wins hands down mainly because they can be made a lot thinner than LED/LCD sets. They can also be curved for a very sophisticated and sexy aesthetic and they are also exponentially lighter which makes them much easier to move around or hang on a wall like an ultra fancy photo frame.

On the price front, OLED TV sets are still quite a bit more expensive than LED/LCD sets, but the gap has been closing at a rapid pace especially since LG introduced their new line of OLED TV sets at significantly lower prices at the 2015 CES in Las Vegas. With advances in technology and economies of scale, the price of OLED sets are expected to come down a lot more and it does seem like it is only a matter of time before they are on par with LED/LCD sets. If by that time, the lifespan, especially of the blue organic material has been licked, it is hard not to see OLED sounding the death knell of LED/LCD TV sets.

Over the recent past we saw the emergence of 4K TV sets and although they offer vastly superior picture quality when compared to 1080p HDTV sets, consumers have not flocked to this genre of television the way manufacturers had hoped, perhaps because of the high price and also because of the shortage of available 4K software. Now some of the leading brands are exploring the option of offering OLED TV sets with 4K resolution. Some 4K OLED sets have been unveiled at various consumer electronics shows and they have dazzled audiences with their performance. 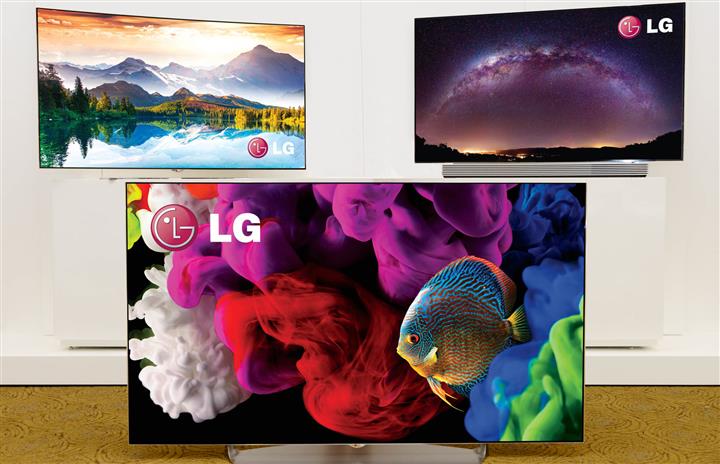 One company that is currently making a concerted effort to take the lead in the 4K OLED sphere is LG. It made its OLED 4K TV debut in 2014 and then followed it up with the unveiling of seven different flat and curved 4K OLED sets at the 2015 CES. The screen sizes ranged from 55″ to 77″. All of these sets feature the WOLED configuration and claim to offer an infinite contrast ratio. The picture quality offered by all the sets in this range is absolutely stunning. The specs are outstanding as well. The response time has been listed at 0.001ms, which would make them around a thousand times faster than most LED/LCD TVs. The viewing angle has also been improved quite significantly. These are amongst the slimmest TV sets to hit the market. LG designed the TV stands to be transparent which is very clever because it makes it look like the screen is floating in mid air. Very cool!

To compensate for its limited experience in the high-end audio sphere, LG wisely collaborated with Harman/Kardon for the audio component of its television sets. This has ensured that the sonic performance of their TVs matches the superiority of its picture image.

In-kyu Lee, the Senior Vice President and head of LG’s TV and monitor division showed his confidence in the company’s latest line of TV sets with the following statement, “LG is driving innovation by making this superb TV technology available to more consumers. LG believes this is where the future of television is headed and we’re going to continue developing and expanding our OLED offerings until it becomes a viable option for all consumers.”

The other major player in the OLED sphere is Samsung, who is the world’s largest producer of AMOLED devices. They make hundreds of millions of displays a year. Both Samsung and LG also produce flexible OLED panels that are used in cell phones and wearable devices. In 2013, Samsung released its first 1080p OLED TV, which featured the RGB configuration and was extremely expensive to produce. This set cost more than $10,000 when it first appeared on store shelves and in 2014 Samsung put OLED TV production on hold. Samsung is rumored to plan to return to the OLED TV market by switching to the WOLED panel technology, however it is not clear how long this will take. Panasonic also showed a prototype 65-inch 4K OLED TV at the 2015 CES, although no plans were announced for a consumer version release date.

OLEDs may have made their debut in consumer electronics devices but they are also being looked at keenly by other industries. One prominent industry is the automobile sector where BMW is researching ways to use OLED in the taillights and interior lights of their automobiles. This may become a reality in the not too distant future. A bit further down the road we could see cars with OLED headlamps, brake lights and indicators. To make this a reality, a way will have to be found to make OLEDs a lot brighter than current technology allows.

Given the huge advantages of OLED TV sets, does it make sense to switch to this new technology right away? The best advice is, it depends. If you absolutely must have the best performance and you have deep pockets to support your craving, then OLED especially when combined with 4K, is a no-brainer. On the other hand if you already have a fairly new large screen TV set, the more prudent option would be to wait for the next generation of OLED products which will hopefully have transcended the few niggling problems that plague it today. If history is any guide, the next generation of OLED TV sets should also be available at prices that are a lot easier to digest.