A Complete Guide To Setting Up Your Turntable

In 1982, the music industry launched the compact disc (CD) with the bold promise that the new digital format would create “perfect sound forever”. Since 2005, a surprising resurgence in sales of turntables and vinyl records has occurred. And why has this happened? Stated simply, digital sources available even now in 2016 do not sound as much like real music as similarly priced turntables do.

And yet, improperly set-up ‘tables, tonearms, and cartridges can sonically suck as bad as a dehydrated camel slurping lukewarm Lebanese canal water. In this article on turntable set-up for beginners, we’ll explain the basics of dialing-in turntables with pivoting tonearms.

The Turntable’s Base, Plinth, and Platter

It’s easy to underestimate the importance of a turntable’s base and plinth. The base needs to be a rigid structure which prevents vibrations from transferring through the tonearm, drive mechanism, and plinth into the cartridge and the record’s grooves.

Vibrations can enter a turntable through airborne acoustical energy (i.e. sound waves) and mechanical vibrations which travel through the stand. Mechanical resonances created by the table’s platter bearing, motor, and drive mechanism can also vibrate through the plinth and platter and cause sonic degradation. Groove modulation distortions caused by the physical movements of the tonearm and cartridge are yet another source of bad vibrations.

Cartridges unwittingly convert all of these vibrations into electrical signals which are heard as low-level distortions, noise grunge, and a clouded haze which hangs over, and underneath, the music.

To minimize vibrations, place the turntable on a level, solid, and non-resonant stand. A flimsy, poorly built rack that shakes like Elvis eating a peanut-butter and fried banana sandwich in early 1977 will noticeably degrade the sound quality of any record player. Once placed on a solid surface, use a bubble level to check that the ‘table is… indeed… level.

If the turntable’s main bearing, sub-platter, and spindle haven’t been lubricated within the past two years, follow the OEM’s directions for re-lubricating all of these parts with the appropriate oil. 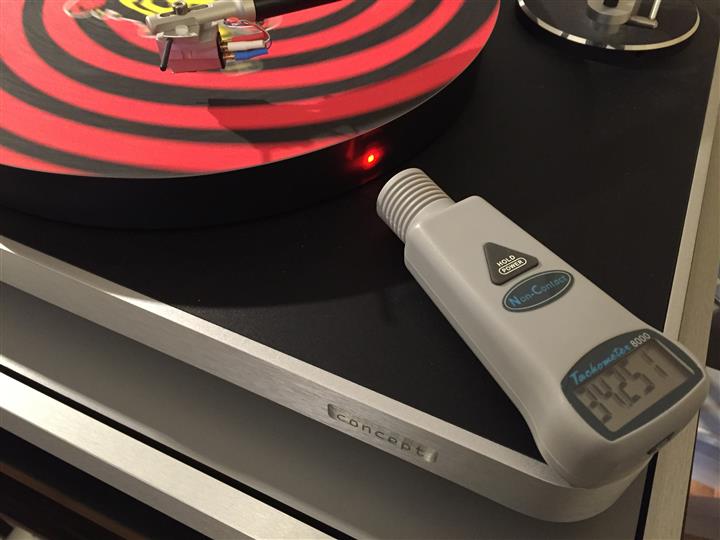 It’s also critical to dial-in the platter’s 33.3 RPM and 45 RPM rotational speeds with a tachometer.

If the platter’s rotational speed is off, adjust it via its electronic speed regulator. If it’s a belt-driven turntable and the belt is old or worn, you’ll need to install a new rubber belt.

A tonearm’s purpose is to hold the cartridge and allow the stylus to smoothly trace the record’s grooves. There are two types of tonearms: pivoted and tangential.

Tangential arms are also called linear tracking tonearms. As tangential tonearms are more difficult to successfully engineer than a space shuttle and more expensive to manufacture than a US Presidential nomination, most linear tracking arms come with breathtaking 5-figure price tags.

Most turntables use pivoted tonearms. Why? Simply because the manufacturing costs for pivoted arms are far cheaper than for tangential arms. 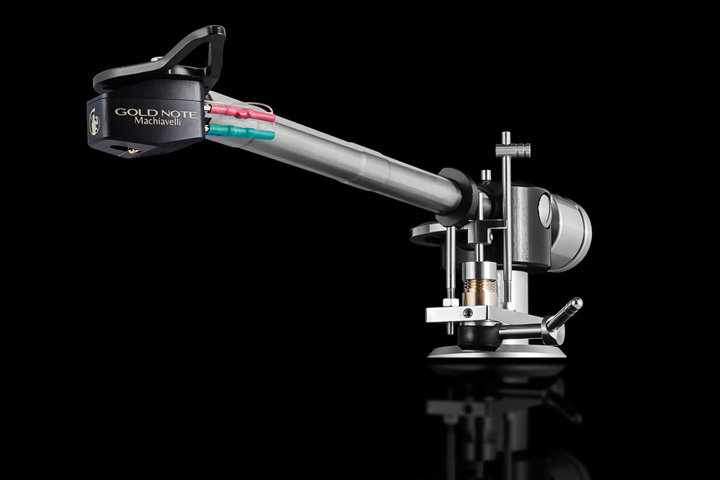 As the Gold Note B7 Ceramic pivoted tonearm pictured below shows, pivoted arms have a counterweight located at the back of the pivot point to adjust the amount of downward force (i.e. the “weight”) which the cartridge’s stylus applies to the record’s surface.

Pivoted arms have a bearing (or a set of bearings) which permits the arm to move in both the horizontal and vertical plains to follow the record’s grooves. Entry-level arms have stainless steel bearings. More exotic tonearms have bearings made out of bronze, ceramic, titanium, carbon, and other esoteric hybrid materials. A tonearm must also have a headshell to hold the cartridge in place with small screws and bolts.

To mount the cartridge to the tonearm, first insert the screws and nuts through the headshell to loosely hold the cart in place. Then attach the four tiny wires which come from the tonearm to the correct colour-coded ends on the cartridge.

BEFORE tightening the mounting screws to the tonearm’s headshell, the cartridge’s alignment must be dialled-in. Baerwald, Feikert, and Mobile Fidelity Sound Labs’ Geo-Disc are some of the more frequently used alignment gauges and protractors. 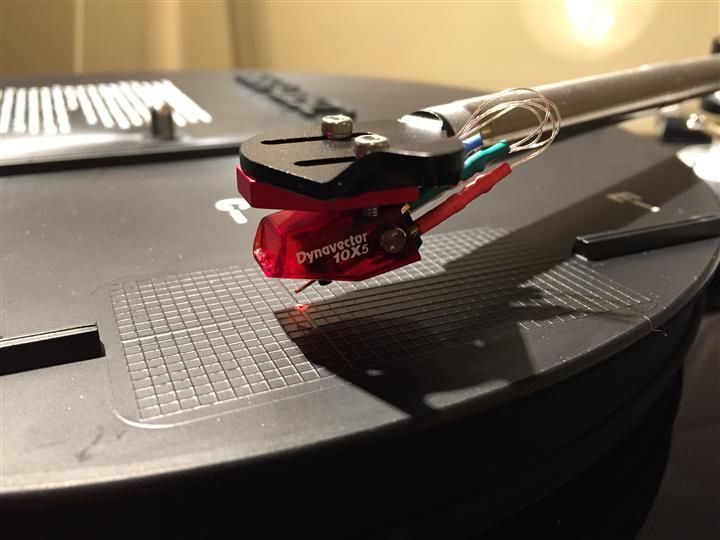 Precisely setting the cartridge’s alignment will keep the needle in the groove, minimize tracking errors, and create better sound.
The Vertical Tracking Angle (VTA) alters the angle at which the cartridge’s stylus enters the record’s grooves.

The goal is to get the cartridge’s body parallel to the record’s surface when the stylus is in the groove. Most pivoted tonearms have a set screw located on the base of the pivot point which allows the arm to be raised or lowered to adjust the VTA. Getting the stylus’ rake angle dialed-in will reduce tracking errors, groove modulation distortion, and surface noise.

Some arms make VTA adjustment more cumbersome than shifting a grand piano up a flight of stairs on a humid afternoon. Rega’s tonearms, for example, use spacers underneath the main pivot point assembly to raise or lower the arm’s height by 2mm or 3mm heights. 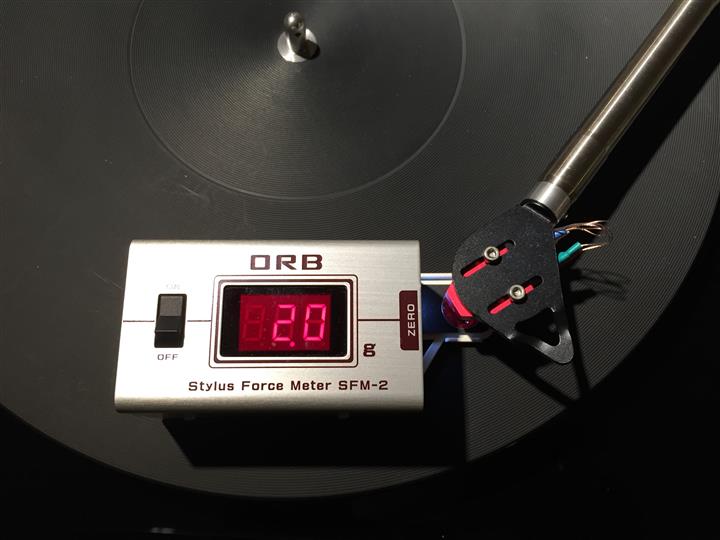 The Vertical Tracking Force (VTF) refers to the amount of downward force that the cartridge exerts. You will need a stylus force gauge to accurately measure the VTF.

Once you’ve dialed-in the cartridge’s alignment and gently tightened it to the headshell, place the VTF gauge on the turntable’s platter underneath the stylus and measure the “weight”. If the cartridge manufacturer recommends a VTF of 1.8 grams, then slide the tonearm’s counterweight along the arm to a position where this weight is achieved. 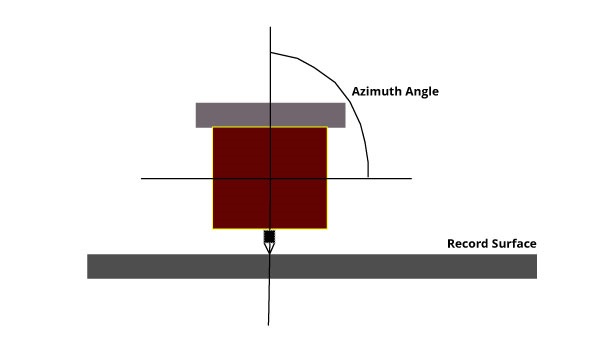 Azimuth refers to the perpendicularity of the stylus in relation to the groove. Correct azimuth alignment is needed to achieve an accurate balance between the left and right channels (i.e. stereo imaging) and the full size and potential of the soundstage. A properly aligned azimuth will form a 90 degree right angle with the record’s surface.

Remember, it is the stylus’ azimuth and not the cartridge’s body that needs to be set at a 90 degree angle. If the stylus is bent, you’ll need an expert to examine and (hopefully) repair it.

What’s the difference between M/M and M/C cartridges?

Moving Magnet (M/M) cartridges employ a tiny magnet which is affixed to the cantilever at the opposite side of stylus’ tip. As the stylus follows the record’s grooves, the cantilever’s side-to-side and up-and-down motions physically move the magnet relative to small stationary coils of wire. These movements create tiny electrical currents which can then be sent to a phono pre-amplifier.

In Moving Coil (M/C) cartridges, wire coils are affixed to the cantilever. As the stylus moves, the coils move and create tiny electrical signals.

The coils in M/C carts are usually lighter than the magnets and are, therefore, far more responsive to tiny movements than heavier magnets. As such, M/C carts can transmit the microscopic vibrations of the stylus in the groove with greater acuity. This heightened sensitivity results in increased dynamics, superior harmonic accuracy, better resolution, faster transients, and larger soundstaging.

Why do M/C carts cost so much? M/C cartridges must use extremely fine wire in the coils. To construct such micro-sized coils requires precision manufacturing and expertise in assembly. These factors inherently result in a far higher retail cost for M/C carts.

As well, M/C cartridges tend to generate much weaker electrical signals and require a higher level of initial amplification to make their signals usable. Thus, phono pre-amps designed for M/C carts must minimize noise while still creating high-gain and a high output. Germane to these parameters, decent sounding M/C compatible phono stages are difficult to design and costly to manufacture. Good sounding ones usually carry hefty price tags that are far higher than M/M phono stages.

“Skating” is unique to pivoted tonearms and refers to a frictional vector force which pulls the tonearm towards the center of the record. To counter-act this force, turntables use weights with pulleys, adjustable tensioned springs, and mechanical devices to create an equal but opposite force called anti-skating.

Dialing-in the anti-skate force allows the stylus to maintain equal pressure against both sides of the record’s groove walls. A Fozgometer and/or a test record are needed to accurately set this force.

To minimize signal loss, the general ratio for cartridge / phono-stage loading is to feed the output signal into a load at least ten times greater than the source impedance. This may seem complex, but it really isn’t.

Cartridge manufacturers tend be non-specific about load impedances and usually recommend a wide range or simply anything above a minimum impedance. Most M/M cartridges use a 47 kOhm impedance load setting.

Does the cartridge’s tonal balance change with load impedance? Yes… if it’s an M/M cartridge. In terms of tone, low output M/C cartridges are much less sensitive to changes in the load impedance.

Measured in dB, gain refers to the amount of amplification that’s applied to the output signal of any M/M or M/C cartridge. Too little gain will leave you with no volume. Too much gain can be over-powering and even deafening. Ideally, a phono-stage should create enough gain to provide a satisfactory amount of volume to a listener.

If your TT’s equipped with a male 5-pin DIN output jack, an enormous improvement in sound quality can be achieved by upgrading the stock phono output IC which came with the ‘table to a higher quality one.

Keeping your records and the stylus’ tip clean will also bring a much quieter sound. A stylus brush and cleaning fluid are a small investment. 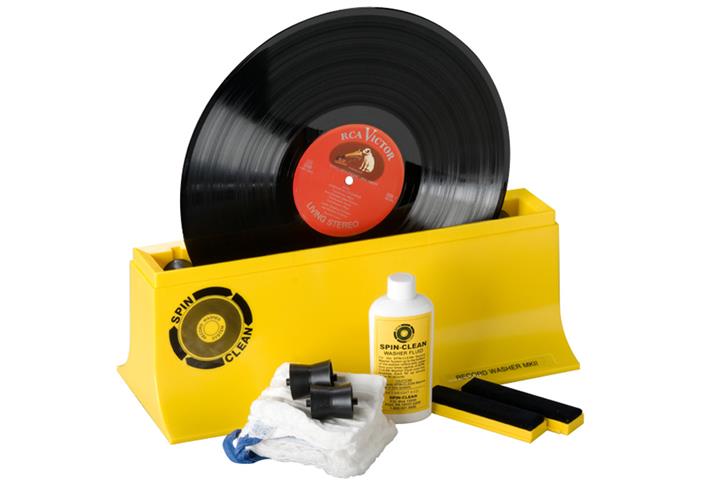 Cleaning vinyl by hand with clean cheese-cloth strips and record cleaning solution is fast and cheap. If you have a sizeable record collection and/or buy a lot of used vinyl, a vacuum suction RCM (Record Cleaning Machine) can provide professional quality results. Thrifty ones start at around $200 and climb skyward from there.

Clean inner sleeves and an anti-static gun are also recommended for keeping your records in tip-top shape.
Groovy listening!

There’s nothing like a great mug to show your love for vinyl! 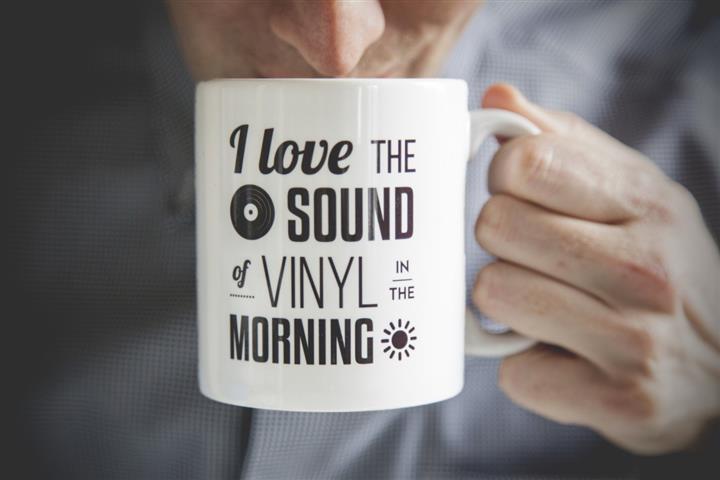