The Pros and Cons of Ribbon Tweeters

Understanding The Pros and Cons of Ribbon Tweeters

Loudspeakers divide their output into frequency bands. Typically they will have one or more large drive units to cover the low (bass) frequencies, and a single smaller unit to reproduce the treble. There are variations of course, for example there may be an additional dedicated drive unit to reproduce middle frequencies, but it is important to understand that more may not necessarily mean better as any theoretical advantages are likely to be outweighed by the additional complication. But the idea of specialisation, using a combination of drive units, each dedicated to a particular band of frequencies, is common to virtually all loudspeakers at all price levels.

The reasons why speakers are designed this way are straightforward enough. Low frequencies need drive units capable of moving plenty of air, which means drivers with large area diaphragms with lots of fore-aft travel in their suspensions to pump the air, and hefty magnets to provide the motive force.

Tweeters have different physical characteristics, though the fundamentals are similar. They don’t need to pump much air as the rules for electro-acoustic efficiency stack up in a different way. A very small number of high frequency Watts goes much further than a similar number of Watts at low frequencies, partly due to the way the ears and brain perceive sound. But tweeters do need to be very agile. They must be able to start and stop quickly so they can mirror the subtle micro-architecture of the changing musical waveform, and it is this speed that helps define their ability to cover the high frequency region effectively.

Most tweeters end up looking at least superficially like miniature bass drivers but usually with a dome shaped diaphragm, typically 1inch/25mm in diameter instead of a cone. The reason for domes is that the shape is inherently stiff without the need to add heavy reinforcement. Any unnecessary mass really is the enemy here, as it will damp down acceleration and deceleration as the diaphragm attempts to follow the rapidly changing signal waveform. Another factor here is that most domes can be simply stamped out using a suitable machine tool, which is the key to making them easy and cheap to manufacture. The diaphragms may be made of woven fabric or silk (or even fabric incorrectly described as silk – it happens). Sometimes the diaphragms have a surface coating to add stiffness or damping, and sometimes they also come with ferrofluid Iron filings suspended in fluid injected into the magnetic gap to help damp the assembly or help with heat dissipation. Other designs use much harder, stiffer diaphragms, often stamped from aluminium – and sometimes more exotic materials, even in a few celebrated cases, synthetic (vapour deposited) diamond or beryllium. But although these are some of the hardest materials available, even they have disadvantages. They’re relatively fragile and heavy, and beryllium in particular has environmental issues. Oh yes, and they’re extremely expensive to fabricate. Vapour deposition of diamond is a tricky procedure even for the best equipped producer.

Ribbon tweeters are quite different. Rather than using a dome radiating element, and a traditional magnet system (and associated voice coil attached to the edge of the dome, which is the other half of the motor system), ribbon drivers use an ultra-thin flat diaphragm, typically made from a thin aluminium foil, or constructed as a metalized polymer film, though this type of tweeter is perhaps better described as a quasi-ribbon. Magnepan make very effective use of just such a design in their panel designs. Ribbons may weigh as little as one-tenth of a tweeter dome, so they’re incredibly light and responsive, but unlike domes, ribbons have virtually no intrinsic structural stiffness of their own, as they are driven evenly over their whole surface and move in response to an adjacent magnet system. Domes, even costly ones, can suffer from structural breakup resonances or rocking motions on their suspensions under dynamic conditions. 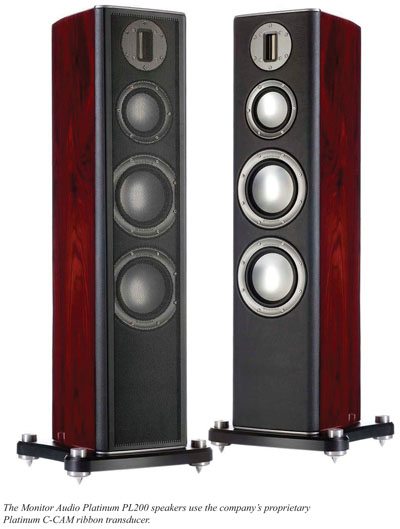 Ribbons have a thoroughly deserved reputation for being special. Their low moving mass and evenly spread drive over their whole surface means they have a potentially ultra-fast transient response, so if detail resolution and delicacy are your main priorities, ribbons could be just what you’re looking for. Ribbons respond to the most subtle waveforms, and to the highest frequencies, including those above 50 kHz that are the special preserve of high resolution formats like DVD-Audio and SACD. They can easily cope with the subtle ultra-high harmonics that lie above the main part of the audio band, and which add some of the air and sense of space you will hear from a really fine recording. Domes on the other hand need a suspension to work, which introduces a hard to control compliant mass to the system, and this inevitably introduces high frequency resonances which under the right circumstances may be audible.

Domes have a significant mass – often around half a gram – and they need a suspension to work, and they may have ferrofluid injected into the voice coil gap, and these things add additional compliant mass to the system, which is not ideal. Ribbons are essentially undamped, and well behaved when controlled by their magnet.

Even the shape of the ribbon influences the sound. The ribbons themselves are generally narrow and tall, which gives them wide lateral dispersion and very limited vertical dispersion (due to cancellation). Narrow vertical dispersion is often beneficial as it reduces muddling ceiling reflections (reflections from the floor are not usually an issue as they will be absorbed by soft floor coverings), while the broad, even horizontal dispersion gives a wide sweet spot which is good for households with multiple listeners. Another plus point with speakers equipped with ribbon tweeters is that they tend to sound predictable and consistent from room to room.

The ribbons themselves have characteristically low impedance, which can be hard to couple to the system amplifier. The usual solution is to use a matching transformer, increasing cost and complexity.

The way ribbon tweeters work demands unusual precision in their manufacturer. The coupling transformer for example will have very few secondary windings, in some cases as few as five, so even minor variations in the way they are assembled can have a disproportionate effect on their audio behaviour.

Ribbons don’t lend themselves naturally to production line automation – another reason for their high cost. There are some reasonable low cost ribbon tweeters of Chinese manufacture, but even cheap ribbons are expensive in everyday terms. In addition the overall design of ribbons tends to be complex for the reasons given earlier, and sound quality is not necessarily an improvement over conventional designs – though the best of breed do inject a touch of magic into the sound that is hard to find elsewhere.

Ribbons don’t respond particularly well in the middle frequency region because they don’t usually work well at their lower frequency limits, where dome tweeters are still on song. As a result the majority of speakers with ribbon tweeters are three way systems, meaning that they include a dedicated midrange driver. There are hidden traps for the unwary here too, as the dispersion of midrange drivers near their high frequency limits tend to become very directional and may not work well where they overlap with the ribbon’s output. Very few ribbon tweeters will work down below 2.5 kHz, and one consequence is that crossover designers are forced to use high order filters in their crossover networks which can be problematic.

Scandinavian manufacturer Dali has gone to the extent of designing a novel twin driver tweeter assembly, which includes a moving coil midrange unit combined with a high frequency ribbon sharing a single faceplate. There are some good two-way ribbons, an example of which is the Monitor Audio PL100, but they’re few and far between.

The bottom line here is that ribbons tweeters are no panacea for the limitations of alternative dome based technologies. They offer some real musical benefits, but equally they introduce problems of their own. The ribbons themselves are necessarily very light and as a result this means they tend to be both fragile and very expensive, though it is usually possible to rebuild a ‘blown’ ribbon.

Alternative tweeter types
The main feature concentrated on how ribbon tweeters differ from the most familiar paradigm for modern tweeters, the moving coil/dome based unit, but there are quite a few other types of tweeters, including (but not limited to) the following:

Coaxial
Coaxial tweeters (e.g. KEF’s Uni-Q & Tannoy Dual Concentric). These speakers position a moving coil tweeter at the back of the cone, which means there is a single acoustic centre, with all sounds appearing to come from a single point in space.
Pros: Improved stereo imagery, better performance and integration for off axis listeners.
Cons: Can be difficult to eliminate midrange colourations due to the complex audio waveguide required.

Electrostatic
An electrostatic tweeter uses a miniature version of a full range electrostatic drive unit. The diaphragm is a thin polymer film with a high resistance conductive coating which is driven by electrically charged perforated plates in front of and behind the diaphragm.
Pros: The best of breed offer finely detailed, low amplitude and low phase distortion, phase coherent sound.
Cons: Step up transformer and power supply required, low sensitivity (for domestic designs), so these speakers tend to be relatively complex and expensive.

Horn
Horns (which you can model by speaking through cupped open hands) are often used in PA applications, and sometimes in combination with other technologies, including ribbons. The horn modifies the directional response, and usually increases efficiency which is useful as power handling is often at a premium with tweeters.
Pros: Helps where power handling is limited, which accounts for their popularity in PA and professional applications.
Cons: Sound quality tends to be unrefined, and colouration levels are often high, though there are some honourable exceptions (e.g. Triangle).

Plasma
An electrically ionised gas, shaped as a small sphere, which is modulated by an electrical field to produce sound.
Pros: Extremely refined and detailed sound, similar to ribbons, but arguably better still.
Cons: Very complex and expensive, output limited in level, and frequency coverage (with very restricted low frequency output). Also potentially hazardous due to the generation of low levels of poisonous ozone.