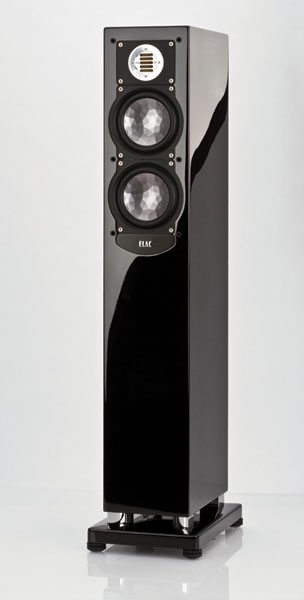 When you think of Germany, you may think of marzipan, fine chocolates or perhaps luxury sports automobiles. Yes, all these top-quality products are made in Germany but this list would not be complete without adding hi-end audio products, including loudspeakers. German hi-end audio product companies include such names as Burmester, MBL, Audio Physic and Canton but yet another company worth noting is known simply by a four-letter word… ELAC. Interestingly enough, Elac is not an acronym, as you might mistakenly first assume but rather an abbreviation of the company’s full name, which is Electroacustic.

ELAC is a loudspeaker company based out of Kiel, in northern Germany, with roots going back to 1926 when Dr. Hecht, Gerhard Schmidt, and Dr. Rudolph founded the company. Beginning with underwater sound technology the company eventually moved into turntables and between 1948 and 1981, Elac became a leading producer of turntables. In 1984 Elac began building loudspeakers, which the company has exclusively focused on since it stopped making turntables in 1981 and phono cartridges in 1997. Elac, true to its in-sourcing philosophy, not only designs, manufactures and assembles loudspeakers in-house but many of the component parts right down to magnets for the drivers.

This brings us to the Elac FS 247 loudspeaker ($3,450/pair), the smallest tower design in the 240 Series and the subject of this review. The courier literally dropped the boxes from upright onto their sides before thumping them down in the foyer of my house. Thankfully, upon opening the boxes, I found that they had come away unscathed – kudos to well engineered packaging. Inside of each speaker box were some thoughtful accessories including a set of floor spikes and rubberized floor cups, a pair of white gloves, a blue microfiber polishing cloth and the ELAC Jet Dispersion Control (JET DC), which is a pair of bagel shaped foam rings and mounting clips.

The review set came in ELAC’s black high gloss finish. I was originally looking for a natural wood veneer to satisfy my preference of traditional aesthetics but was sad to find out that Elac had recently ceased production of their wood veneers, leaving only two options – black or white high gloss lacquer. On a happier note, the laquer was very well executed and the FS 247’s build quality was excellent; putting forth a clean and purposeful posterior, reminiscent of a pair of finely groomed, pure-bred Doberman Pinschers. The silver of the tweeter and aluminum faceted twin mid-bass drivers, along with the chromed pedestal legs, against the black gloss of the cabinet, was urbane with a dash of panache. The review pair was flawless, speaking to a high-level of workmanship and quality control. It was obvious that Elac takes pride in the locale of manufacture, as each speaker’s tweeter baffle hosted a prominent sticker of a German flag bearing the caption: “ELAC Made in Germany”.

The FS 247 is a 3-driver, 2.5-way (450 / 2500 Hz crossover points), twin ported bass-reflex tower design with a nominal impendence of 4 ohms. It offers a sensitivity of 89 dB, 30 to 50,000 Hz (IEC 268-5) frequency range and 120 watt continuous / 160 watt peak power rating. The cabinet has an internally braced MDF construction with an upper rear port as well as a lower port that exhausts from the bottom of the cabinet, between the pedestal legs and base. A removable foam rubber bass control plug is installed in each speaker, sealing the rear port for tuned bass. On the mid-back is a twin pair of clear plastic shrouded gold-plated five-way binding posts and shrouded jumpers.

The FS 247 uses Elac proprietary drivers – a single Heil/AMT design JET tweeter and a pair of 150 mm / 5.9 inch Crystal AS-XR mid-bass drivers. The JET tweeter is constructed from a continuous single folded ribbon membrane and coil that allows greater speed and efficiency than conventional dome tweeters. Rather than moving forward and back like a dome tweeter, the ribbon squeezes air out of the folds, in an accordion-like fashion. The unique JET / AMT tweeter design is claimed to produce less distortion and therefore, improved smoothness, transparency, detail and extension. Also noteworthy are the Crystal AS-XR or Crystal Membrane Aluminum Sandwich eXtended Range drivers. These drivers have a distinctive multi-faceted, diamond-like appearance; the stamped form is purported to considerably stiffen the cone and reduce distortion. The cone is actually a sandwich of the aluminum cone and a paper backing, bonded using a “secret” gluing method. The voice coil is joined not only at the neck of the paper cone but also to the bottom of the aluminum cone, which allegedly expands the operational frequency range by almost one full octave.

But enough background, you’re probably wondering what they sound like. Well, I began by hooking them up as L/R channels in my home-theatre setup, which is powered by an Onkyo TX-SR805 receiver. There they were given over 300 hours before I began to critically evaluate them. In my HT setup the FS 247’s brought an impressive level of intelligibility to speech and great clarity to low-level details, producing a lucid cinema experience. I watched broadcast television, DVD, Blu-ray and even streamed movies via Netflix. My first impression was that the FS 247’s were wonderfully detailed and natural sounding, which are great qualities for home theatre applications. It was also nice to discover that they could perform so well powered simply by an AV receiver, though my Onkyo 805 has quite a robust power supply and is 4 ohm capable. This left me wondering what a full ELAC home-theatre setup might bring to the table.

Now, it was time to get serious by plugging these pups into my two channel kit. Mated to my Bryston 4B-SST2 amplifier, BP6 pre-amplifier and Rega Apollo CDP, it was time to see what these Dobermans could do. I began a session with something light, Sarah Harmer’s album “All of Our Names”. Sarah is a Canadian artist with a sweet and simple voice that complements her folk rock music. The song “Pendulums” brought forth an impression of the singer sitting just right of centre with a guitar strumming just fore of her voice. There was delicacy in the guitar, and cymbals were light, airy and smooth, with a taut kick drum. Her girlish and sweet voice was clear, with inflections easily heard. The bass guitar was defined and controlled. Skipping to track three, “Greeting Card Aisle”, the lead acoustic guitar that opens was brought forth with lifelike string detail. Finger plucking on the guitar strings and the natural resonances of the guitar body were easily perceptible. Gentle piano keys took their own space in a moderate sized soundstage, reflective of an intimate venue. An eerie synthesizer floated a little higher in the soundscape and Sarah’s voice came across as natural, though melancholy, befitting the song.