In the era of growing digital music adoption, many people predicted vinyl enthusiasts along with the format itself to quickly fade away. The 90’s represented these “dark days”. However despite these predictions, in 1991 a company named Pro-Ject Audio was born. Some people argued that it was commercial suicide, while others believed that it was a smart move in anticipation of the rebirth of the analogue format. Well it turns out that Pro-Ject Audio bet on the right move. Case in point – BIllboard recently reported that in December 2020 weekly vinyl album sales in the U.S. hit a new record high since Nielsen Music/MRC Data began tracking music sales in 1991. Sales of records also surged dramatically in the UK in December 2020, as reported by the British Phonographic Industry. Naturally then, it should come as no surprise that turntable sales have also seen healthy sales growth. This brings us to Pro-Ject Audio and their latest introduction, the Debut Carbon EVO turntable priced at $499 USD. According to the company’s website, Pro-Ject Audio has a seemingly simple mission: “to offer the best analogue experience for reasonable prices”. Pro-Ject Audio designs its products in Austria and produces them in various parts of Europe. Now let’s take a closer look at their latest turntable.

Pro-Ject Debut Carbon EVO Turntable
The Debut Carbon EVO is the successor to the company’s legendary Debut Carbon turntable and offers improvements in many areas. It is designed with entry-level users and first-time record player buyers in mind. It comes as a complete package that’s ready to play out-of-the-box. What you get is the turntable itself, a newly designed Sumiko Rainier moving magnet cartridge and a removable acrylic lid. You won’t need any specialist tools or the need to go through a complicated setup which many turntables require. Just unpack it, follow a few simple assembly instructions and you’ll be ready to enjoy music in a few minutes flat.

Underneath the surface, the Debut Carbon EVO focuses on the core elements that make a good-sounding turntable: a well thought-out design, high quality materials and expert craftsmanship. You’ll be happy to know that it offers an electronic speed selection, via a hidden button under the left side of the plinth, which is a great feature to see at this price range. This makes switching between 33 / 45/ 78 RPM records a breeze. In contrast, many similarly priced competitors require users to manually adjust the speed selection, meaning that you have to remove the platter and move the drive belt – which is quite a hassle. 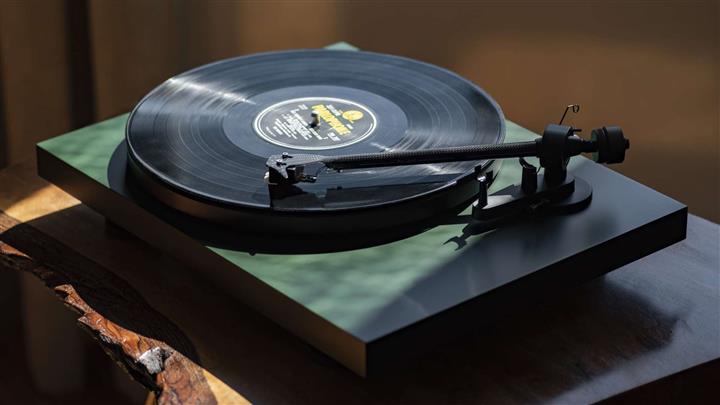 One of the refinements in the design of the Debut Carbon EVO over its predecessor is in the motor suspension which provides improved vibration control. Another refinement is a trio of new height-adjustable, damped aluminium feet that allow you to easily level the turntable and provide additional vibration control. The 1.7 kg steel platter has also received an upgrade: a TPE (thermoplastic elastomer) ring has been added on the inside of the platter. Thanks to this, the Debut Carbon EVO achieves a quieter operation, with less wow and flutter.

As I mentioned above, my Debut Carbon EVO turntable came equipped with a Sumiko Rainier moving magnet cartridge, which is supplied to all US customers. The rest of the world gets the Ortofon 2M Red moving magnet cartridge. Pro-Ject’s own 8.6-inch one-piece carbon tonearm is included with all models. The tonearm offers a very stiff, lightweight construction to achieve a high level of playback performance. Pro-Ject tonearms are very well regarded in the audio business as evidenced by the fact that the company is an OEM tonearm supplier for a number of other high-end turntable manufacturers. In fact, my earliest encounters with Pro-Ject tonearms was during listening sessions with turntables outfitted with the Pro-Ject 9cc Evolution tonearm. I recall being very impressed with the sound reproduction these tonearms are capable of, each time I heard them in play.

There is no question that technically speaking the Debut Carbon EVO will fit the bill for most record listeners and music lovers just starting out in the hobby. 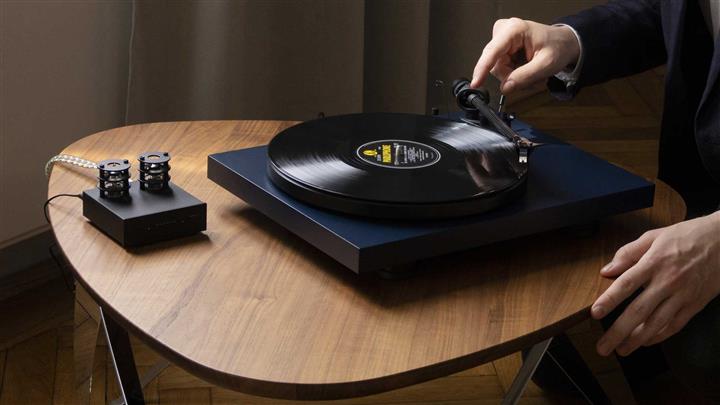 Performance / Listening Tests
Since the Debut Carbon EVO has a factory-installed tonearm and cartridge, the initial setup was super simple. I had the turntable playing in about 20 minutes after opening the box. Since this was a brand new unit, I did some passive listening for the first week or so – letting the turntable break-in properly – before I started doing any serious listening.

My listening setup included my beloved Acoustic Masterpiece AM-201H integrated amp which animated a pair of Spendor S5e (2.5-way) floorstanding speakers. My phonostage was the simple and very effective Lehmann Black Cube SE II. Since I’m a big analog-source buff, I had the benefit of being able to compare the performance of the Debut Carbon EVO to two other turntables: the Oracle Alexandria (SME 309 tonearm / Audio Technica AT33EV cart) and the Linn Sondek LP12 (Linn Ekos SE tonearm / Linn Adikt cart).

After the initial A / B comparison, I performed the remainder of my listening tests on the Debut Carbon EVO turntable. In my opinion, what sets a good audio component apart from a great one is its ability to evoke emotions when listening to music and the Debut Carbon EVO did precisely that. Additionally, I didn’t suffer from any listening fatigue even after extended listening periods, which is a telltale sign of a well performing audio component.

Although I listened to a lot of pop and rock music while testing the Debut Carbon EVO, I also tried several jazz records to get a better sense of this turntable’s true performance capabilities. Since we haven’t been able to enjoy live music due to pandemic lockdowns around the globe, the next best thing you can do is to put on a live jazz LP. I chose one of my favorites in this category, an album from the London duo Binker & Moses called “Alive In The East?” This live album captures an intimate recording environment that was very well presented by the Debut Carbon EVO. The opening track The Birth Of Light offers a high-energy drum performance by the talented Moses Boyd and Yussef Dayes. The Debut Carbon EVO managed to deliver the dynamics of this performance with a convincing ‘feel’ of the energy of the drums. I could easily hear the individual components of the drums and equally as importantly I could also hear the performance as a whole very cohesively. On the track Children Of The Ultra Blacks the Debut Carbon EVO created a genuine illusion of the live venue soundstage and the environment, which came alive with the crowd in the background. The brass instruments also played with natural textures and a great level of realism on this track. Last but not least, the Debut Carbon EVO managed to capture the full essence of the aggressive improvisation at the end of this track. The Binker & Moses LP turned out to be a very worthy listen on this turntable.

As part of my review routine, I always make sure to spin some albums that I haven’t listened to previously so that I can get a first impression of them with the component I’m evaluating. PJ Harvey recently released the “To Bring You My Love (Demos)” record that I’ve been waiting to listen to for a while and this was a perfect chance. Since this was a reissue of various demo tracks, I knew these raw versions of the songs would bring an interesting aspect to my review session. The Debut Carbon EVO truly brought this record to life with all the rawness and imperfections you would expect from demo tracks. Although most aspects of the tracks sounded distinctly different, I particularly appreciated the contrast of the guitars on this album compared to the commercial album release. Following my “demo” session, I placed the regular reissue of this album on the platter, an album that I’m intimately familiar with. This is a very well recorded album that offers clearly articulated instruments and vocals. The Debut Carbon EVO delivered clean and precise imaging of this album and preserved the separation of the different instrument and vocal elements. The whistle heard on Meet Ze Monsta could have been a little punchier but it was clearly defined. On C’Mon Billy the acoustic guitar at the beginning of this track sounded truly organic and when Polly’s voice jumps in, it took the lead role in the presentation just as it should.

It was while listening to Richard Healey’s album “Hollow Meadows” that I enjoyed the performance of the Debut Carbon EVO the most. This album offers a perfect blend of rock, pop and catchy ballads and was a great pleasure to listen to on this turntable. Healey’s melodic, baritone vocals were reproduced with a convincing realness, while the guitars demonstrated that the Debut Carbon EVO was capable of a natural midrange performance on tracks like Which Way. I particularly enjoyed the song I Still Want You, especially the part of the track when the pace of the song picks up pace. Although the Debut Carbon EVO didn’t offer the same degree of bass precision as my Linn Sondek LP12, I found it to deliver a very similar level of engagement – not bad for an entry-level record player. 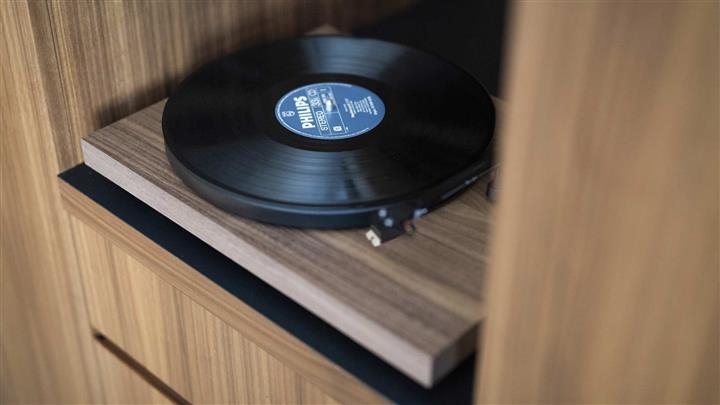 Conclusion
For most music lovers, the memories of their first great turntable will never fade away, similar to how they’ll never forget the first record they bought. At $499 USD, the Debut Carbon EVO is the perfect high-quality beginner turntable for just about all music fans. Not only does this turntable deliver sound that will make your soul groove to the music, it comes pretty much ready to play out-of-the-box. While it doesn’t extract every last ounce of detail from records like higher end turntables, it manages to extract the essence of albums – which is key to short and long term listening.

One other cool thing about the Debut Carbon EVO? The performance of this turntable can be elevated further by picking up one of a few upgrades offered by Pro-Ject. If you choose to invest in some of these upgrades, I recommend doing them in this order: the sub-platter (Debut Alu sub-platter), acrylic platter (Acryl it) and record clamp (Clamp it).