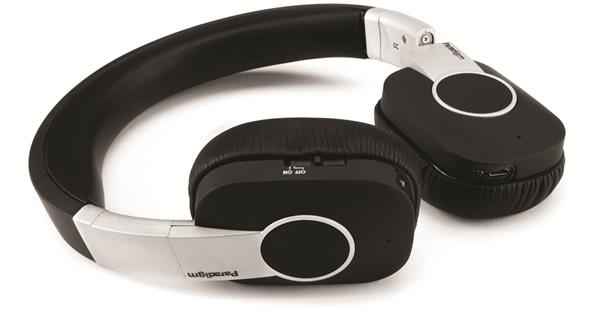 Paradigm is a Canadian company known across the world for its wide range of speakers, both large and small. Based in Mississauga, Ontario, they have been building speakers for the past 30 years but it’s only in the last two years that they’ve expanded their offerings into portable audio.

The new H15NC headphones are their latest offering with the added functionality of active noise cancelling (their sibling, the H15 lack the noise cancelling functionality). The headphones arrive in a zippered, hard black case that holds the headphones, standard micro-USB charging cable, USB wall charger, and lastly, dual-prong mono-to-single stereo adapter (used on old airplanes). The headphones themselves are well padded with memory-foam ear cups that swivel and padding along the top of the headband, which extends on both ends. I have a borderline large-sized head (according to autocross helmet sizing) and the headphones fit comfortably for extended listening sessions (1-3 hours) without much fatigue or neck strain thanks to their relatively lightweight 179g mass. However, due to the elastic nature of the headphones and their tendency to close together, after a long session I could feel the effects on my ears.
The detachable cord comes with an in-line microphone and remote control for use with a smartphone and unfortunately, only fully supports Apple iOS devices (answer/reject, play, next/previous track, volume up/down) and has limited Android support (unofficially). The active noise canceling is powered by a built-in lithium ion battery which charges in approximately 4 hours and lasts up to 40 hours on a single charge. Each 40mm mylar driver takes in up to 15mW of power to deliver a response of 20 Hz through 20 kHz.

To compare with these headphones, I used my well-worn Shure E4c in-ear earphones (also referred to as in-ear monitors or IEMs) which cost $50 cheaper when I bought them six years ago than the H15NC’s $299 price tag. The E4c IEMs offer a degree of noise isolation thanks to their foam tips which you insert in your ear. I was curious to hear the difference between physical noise isolation versus active noise cancellation of these Paradigm over-ear headphones. It should be noted that since H15NC’s ear cups don’t cover the entire ear, that element of physical noise isolation is not present.

To test out the sonic performance of the headphones, I wanted to try a range of different audio content, from classical to crossover instrumental to loud, vocal pop/rock. Most of my testing was performed with the noise cancelling feature activated.

Popping in Mediaphon’s Vivaldi disc from their Classics set, I concentrated on the soundstage, presence, and detail of the strings and orchestra. From the start of “Spring”, the Paradigms produced a deeper, fuller soundstage than the Shures which helped to surround me and pull me further into the music. The Shures on the other hand made the performers sound more like they were outside with no walls. Nearing the end of the opus 8, no. 1 of Spring, a harpsichord is introduced and through the Paradigms, the sound was more subtle, softer, and further back on the stage than with the Shures. In addition, the Paradigms more accurately rendered the distinctive “twang” that the plucked keyboard instrument is known for. Throughout the opus, the individual instruments didn’t get muddled together – something that frequently occurs when the soundstage is too small, which causes recordings to sound like everyone’s figuratively in the same spot, playing their instruments. The strings were clearly positioned at the front of the stage, while the percussion instruments and the harpsichord could be heard further back left and centre, respectively.

Moving onto Strauss’ Blue Danube, the distance between the different instrumental sections on the stage was even more evident, providing a clear separation. This piece also has brass instruments such as the tuba and larger percussive instruments including the enormous timpani, which can be heard in the far back with its deep, soothing long notes, providing a foundation for the strings to keep up the melody. Of particular note was the ability for the woodwinds to peek out with their trills throughout the middle of the waltz, yet still I was able to hear the strings fade naturally in front of them. If there was one shortcoming of the midrange, it was that it lacked the piercing sharpness that instruments such as trumpets are known for. They still sounded distinctive but their metallic edge was rounded off so as to not be so glaring. The treble response was gentle, which could be heard on the rapid-fire snares, which were urgent and energetic as expected but not overly harsh or tight. Cymbals also clanged together well without leaving the lingering metallic “sss” found when treble is too bright. During the string staccato (plucked) movement, the back and forth play between the left and right orchestra sections really showed off how wide the soundstage was. My mind drew a mental picture of the conductor turning from one side to the other. At the end of the waltz, the Paradigms really shined with bass that was punchy – there are numerous drums across the entire stage all revving up for the finale.

Next, I transitioned to an album from classical crossover group called Bond, a string quartet that integrates synthesized instruments, sounds and vocals. Listening to the opening track “Explosive” on their debut album “Classified”, it was easy to visualize the four members of the quartet standing in front of an accompanying band with a clear separation of strings and percussion that surrounds them. When the woodwind solo began, I could hear the musician entering in from stage right and moving in front of the quartet. Additionally, the skewed natural transitions that occur when the pan-flute is being slid around sounded more accurate, and therefore more realistic than with my Shures. Continuing with “Lullaby” the Paradigms were beginning to reach their limits, having trouble keeping the soundstage vast. The introduction of the repetitive percussive synthesizer and operatic vocalizations, in the midrange, showed that the headphones had a hard time providing separation between the background accompaniment, and the string quarter and electric guitar that carry the melody. The opera singer however, was distinctly standing in the back of the stage so while her vocals had too much emphasis, at least she was not a floating ethereal voice. When there are fewer electronic accompaniments, the various stringed instruments (violin, viola, and cello) sounded less smothered. I also listened to the DVD of Bond’s live performance at London’s Royal Albert Hall, which really made the Paradigms shine, creating an immenseness that transported me to a seat in the venue.

Finally, moving onto a vocal album, I loaded up Metric’s latest album “Synthetica”. Wanting to test out if the same shrinking of the soundstage occurs with a vocalist, I started off with “Dreams So Real,” a track with a continuous, buzzing synthetic accompaniment. Here, the main element, Emily Haines’ vocals, weren’t as stifled by the accompaniment as the strings were. The synthetic accompaniment didn’t have a distinct position on the stage, but at least it wasn’t cutting off other frequencies in the mid-range. Next up, “Breathing Underwater” performed better due to its different instruments such as electric guitar, bass, drums, and more subdued synth use.

Overall, the Paradigm H15NCs are a solid performing pair of headphones that provide bass that is articulate, weighty, and precise without being bland and booming. Their ability to provide a vast, layered soundstage is impressive and is put to good use especially when listening to live performances.

It must be noted that with any portable audio, individual listeners will experience different frequency emphases depending on the type of portable audio device they listen to. For example, one person using in-ear monitors may hear a strengthened low midrange, while someone else may not when using the same device. Taking those same people, one may hear thicker bass, while the other may not when using over-ear headphones. This is due to the physical differences of how the sound is produced, ear shapes, canal shapes and sound propagation. Therefore, while reviews are an excellent place to start when looking at portable audio products, there will be instances where you don’t hear the same track as the reviewer did.

But I digress. If the music you listen to contains a multitude of natural sound-producing elements, the H15NCs ensure that each gets to shine and has sufficient space. If you’re looking for comfortable headphones with active noise-cancelling, I definitely suggest trying out these Paradigms – especially if you’re travelling by air as low-frequency noise such as engine noise should be well in the range of their noise-cancellation abilities. And the 40-hour battery life should last for most round trips. At $299, they are well priced and should hold up well when taken care of and kept safe in their hard-shelled case when not in use.