I recently had an issue with my air conditioner. While a technician named Trevor worked on the HVAC system, I was burning-in a pair of Sonus faber’s new Electa Amator III (EA3) bookshelf monitors. Trevor quietly appeared at the side of my basement 2-channel audio room. He gazed at all of the audio gear curiously and asked: “What’s all of this?”

“It’s a stereo system.” I replied.

I also had a pair of Sonus faber’s Sonetto VIII floorstanders positioned next to the EA3 monitors. Trevor walked right up to one of the Sonetto VIIIs, leaned in towards it, and then commented: “Wow… these sound amazing!”

“Yes… they certainly do.” I replied with a delighted smile.

The Electa Amator 3 bookshelf speakers had so convincingly disappeared into my listening room that Trevor had mistaken them for the much larger Sonetto VIIIs. The irony of his statement also gave me a striking way to introduce this article.

To recreate frequencies above the 2.5 KHz level, the EA3 uses one silk-dome DAD (Damped Apex Dome) tweeter that’s designed to enhance extension above 20 KHz. Sonus faber proudly declares that this is their best sounding tweeter.

A single 18cm diameter cone that’s made from an air-dried blend of cellulose pulp, kapok, kenaf, and other natural fibres produces the midrange and bass frequencies beneath the 2.5 KHz level. Sonus faber claims that the cone’s texturing reduces resonances while concurrently increasing resolution. Said cone is as stiff and rigid an Olympic calibre diving board while also being as fast and dynamic as the Flash after he’s shot-gunned a 6-pack of Red Bull. 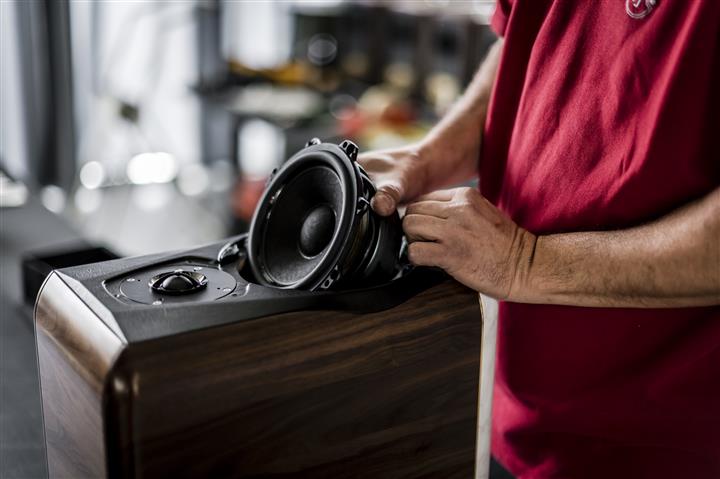 The driver is mounted to a die cast basket that’s engineered to minimize compression and allow maximum freedom of the moving parts. Lower frequency notes are tuned by a rear-firing circular reflex port. Nominal impedance is 88dB SPL (2.83V/1.0m).

The EA3’s cabinet is comprised of a constrained 3-layer system that uses 2.5cm thick sections of real walnut, a 3cm thick white Carrara marble base, and a thin brass sheet that’s sandwiched in between the wood and the marble for stability and dampening.

For a smallish standmount monitor, the Electa Amator III’s modern looks command a room. The front and rear baffles are covered in genuine leather. If white marble makes you to drool like Oprah Winfrey in a chocolate shop, the EA3 will make your heart thump with a shivering endocrine surge of want and desire.

Overall, the real walnut, white marble, and genuine leather aesthetic of the 3rd generation Electa Amator sings of luxury and old-world craftsmanship. The EA3s are the kind of loudspeakers that cause fistfights at estate hearings. 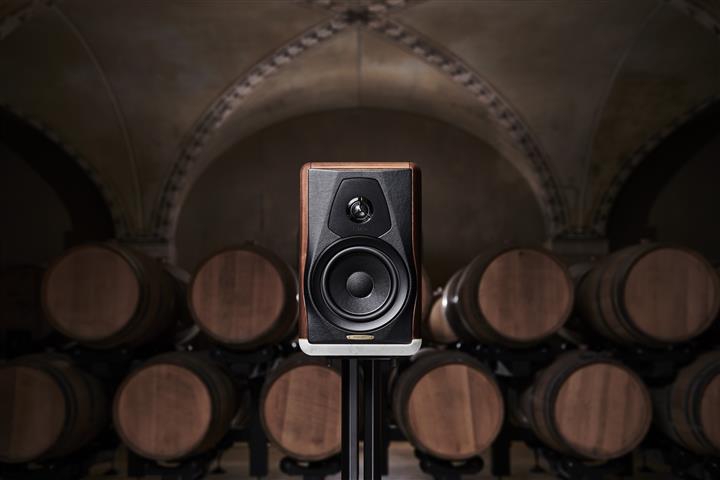 Set-up and Initial Impressions:
After installing the spikes into the base of the stands, levelling them, and then cranking the nuts tight with a ½” wrench, I attached the speakers to the top of the stands with the bolts supplied by Sonus faber.

The Electa Amator III has an efficiency rating of 88dB. As such, they need amps with healthy watts to drive them properly. I auditioned the EA3s with the following amplifiers: 1), a pair of Ayon Audio’s Crossfire Evo mono-block tube amps; 2), vertically bi-amped with a pair of 55w/ch Sonic Frontiers Power-1 tube amps; 3), a Sim Audio 860A 400w/ch solid-state power amp; and 4), a pair of Icon Audio MB-90 Mk#2 KT-150 tube powered mono-blocks.

Despite this, in smaller rooms I usually prefer the sound of 2-way standmounts. Down through the years, I’ve heard FAR too many monstrous floorstanders that created deafening urban dance-club volume levels. Most of these speakers completely failed to create the shiver-inducing and soul moving sonics that I’m perpetually craving.

The Electa Amator III monitors created a surprisingly full and refined sound. Even with challenging recordings, they never sounded congested, overloaded, or like they were straining to release a thunderous pent-up load of constipated duck flatulence.

PRaT and transient response were lightening-fast and similar to that of reference-calibre electrostatic speakers. Although the EA3 monitors certainly didn’t generate the deepest bass I’ve ever heard, notes in the lower registers were taut and agile.

Timbral accuracy was also a great strength of the EA3 monitors. Midrange vocals were imbued with a glorious warmth and a palpable — even sensual — *feel*. Across the frequency spectrum, the Electa Amator III standmounts seamlessly blended all of the notes in a cohesive manner that sounded organic and natural.

The Electa Amator III’s stereo imaging was impressive. When driven by reference calibre amps, Sonus faber’s beauties disappeared faster than reasonable debate and coherent thinking at an Antifa rally. Balancing precision and detail with warmth and density isn’t an easy thing to do. While the EA3 leaned in the direction of warmth, it still achieved a balanced and cohesive sound in a convincing way. 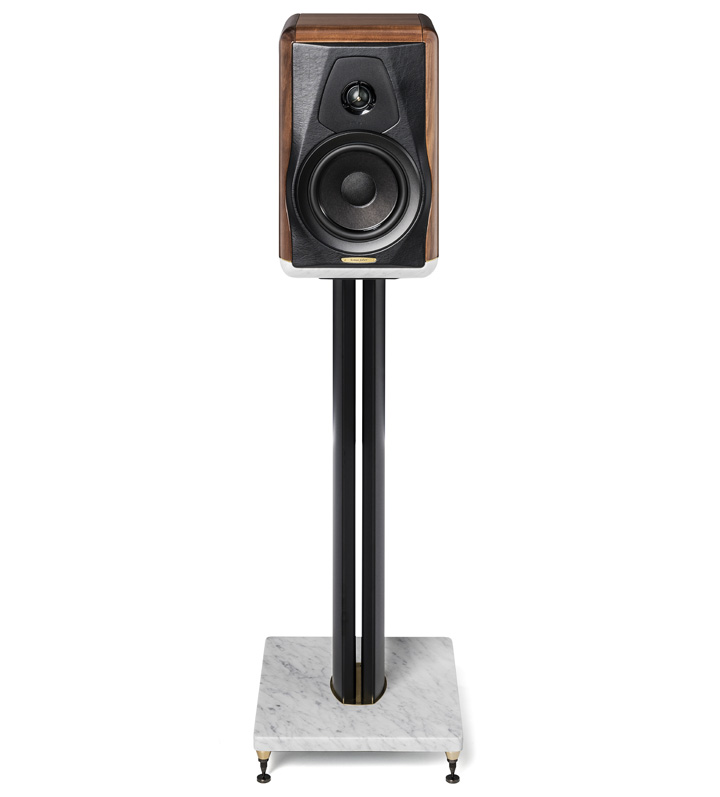 Back in ’71, the Stones were overflowing with fresh musical ideas and a vibrant passion for life that was legion. The Electa Amator III monitors recreated Mick Jagger’s howling blues-junkie vocals with a shivering timbral accuracy. Listening to the EA3s, I suddenly realized how utterly unique a vocalist and lyricist Jagger truly was. Love him or loathe him, in the early 1970s there was nobody like him.

Keith Richards’ soul-moving rhythm and lead guitar lines bristle with the painful intensity, superlative *touch*, and the harmonic sophistication of a truly gifted musician. Listening to the 7:14 length song “Can’t You Hear Me Knocking”, the way in which Richards weaved the complex tapestry of cocaine-rodeo guitar lines and atmospheric rhythms into this epic track is utterly fascinating.

Hearing Sticky Fingers through Sonus faber’s Electa Amator III speakers, I wished I could build a time machine out of a Delorean, fracture the space/time continuum, and return to 1971 to see the Stones play live when they were young and hungry. Days after listening to this album with the EA3s, I still had the haunting rhythms and evocative sonic landscapes of Fingers echoing through my brain.

One question remained though: could the Electa Amator III monitors generate enough bass to recreate hard rock, R&B, orchestral music, and even heavy metal in a convincing fashion? I needed some heavier music to test this lingering question.

Released in 1981, Black Sabbath’s Mob Rules features a curious variety of doom-laden and atmospheric metal songs. Rampaging guitar solos, thundering bass lines, and chest-thumping percussion are all showcased on this record in abundance.

This was Ronnie James Dio’s 2nd studio album with Sabbath. The EA3 standmounts recreated his soaring vocals as emoted on tracks like “Voodoo”, “The Mob Rules”, “Country Girl”, and “Turn Up the Night” with goose-bump inducing intensity and accuracy. In particular, Sonus faber’s beauties delivered the moody, desperate, and near suicidal sound of the intro to the song “Falling Off the Edge of the World” with a heart-shaking honesty.

Did the EA3s produce enough slam in the bass registers? Yes. In fact, I was having so much fun listening to the roaring tracks on Mob Rules that I never once paused to think that the bass wasn’t prodigious enough.

Unless you’re trying to fill a gymnasium with booty-twerking bass, the EA3 delivers satisfyingly taut and agile low-end slam. If the only minor issue I have is the colour of the marble, it’s safe to say that Sonus faber has built a fabulous bookshelf loudspeaker.