One of the top high-end stereo amplifiers of 2019

As adrenaline junkies age, sooner or later we lose the physical capacity to surf 50 foot waves or snowboard down 8,000 foot mountains. So how can we create the same shivering adrenaline fix that we once so easily could when we were younger and stronger? In pursuit of the endocrine surge and endorphin rush caused by natural flowing epinephrine, some seniors take up Nepalese mountain climbing, nude jai alai, or amateur shark dentistry. Predictably, most of these clowns end up dead while they’re chasing the adrenaline dragon. 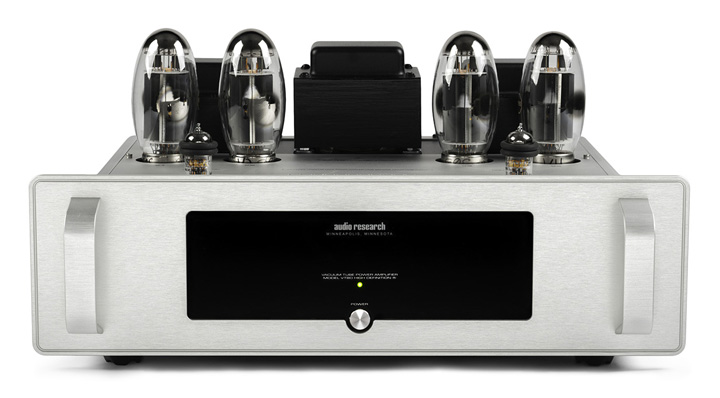 Audio Research’s VT80 SE vacuum tube stereo power amplifier is one of their Foundation Series models. It’s the exact same amp as their VT80, except that the SE version uses higher capacity KT-150 output tubes. Unboxed, it weighs 45.7 Lbs and measures 10.33″ high x 18.45″ wide x 19” deep. This is a big power amp that needs a large dedicated amp stand to handle its considerable size and weight. My review sample came with a silver chassis. There’s no remote control because, other than the front panel’s ‘On/Off’ button, there’s nothing else to… er… control.

The circuit is a hybrid design that uses JFETs and tubes to amplify incoming signals. The amp’s output is rated at 75 watts per channel. The VT80 SE features an automatic tube biasing circuit that lets users install sets of KT120, KT150, 6550, KT88, or KT90 output valves. Not surprisingly, ARC recommends using tube sets which they’ve burned-in and matched at their factory in Minnesota.

The KT150 tubes that ARC provided have an estimated lifespan of about 3,000 hours. An individual fuse protects each tube. If a single tube dies, only one fuse blows. This design saves the whole amp from a catastrophic and painfully expensive failure. The individual fuses are located on the bottom of the circuit board next to each tube socket. While tube failure is rare, this protective circuit design is far better than having to watch every tube and the entire amp go Fukishima in a 4th of July inspired fireworks display.

The stock driver tubes are two Sovtek 6H30 dual triodes (one per channel). The VT80 SE even has a small “Hours” meter on the rear panel to measure tube life. The amp comes with both balanced (XLR) and unbalanced (RCA) inputs, and a switch to select one or the other. There are binding posts for both 4Ω and 8Ω speaker loads.

ARC ships the tubes in an internal box surrounded by protective foam to prevent damage while in transit. End users need to install the valves before turning the amp on. The VT80 SE has a rear panel 20Amp IEC plug. To hear this power amp sound its best, I’d recommend plugging in an audiophile 20Amp A/C cable.

The VT80 SE is built like Pamela Anderson when she was on Baywatch. Once you see this beauty, it’s hard to stop staring—even… drooling—at its impressive aesthetics. Gorgeous looks don’t mean a damn thing though if it doesn’t have stellar sonics. So… how does the amp sound?

For a tube power amp, the VT80 SE communicates the essence of music in a very direct manner. Its *matter-of-fact* sound creates tactile harmonics, palpable textures, and impressive sonic layering.

Across the frequency spectrum, the Tung Sol KT-150 output tubes produced lightning-fast transients and startling dynamics. Soundstaging was immense in size and imaging within the sound stages was precise and clearly delineated. With high quality 2-channel stereo recordings, wandering into the walk-through 3-dimensional musical landscapes produced by the VT80 SE was a breathtaking pleasure.

Shortcomings…? The VT80 SE’s 4Ω outputs are grounded. In the owner’s manual, ARC notes: “Avoid wiring and speaker switching systems that have a common ground wiring or switching of the amplifier output.” After connecting the 4Ω taps to half dozen different pairs of speakers, I consistently heard a low-level ground hum. Although the hum didn’t overpower the music, it was still *there*; and not in a good way.

The amp sounded superb when using the 8Ω output taps. Due entirely to the way in which the 4Ω taps have been grounded, if you’re using speakers with a 4Ω nominal impedance, I’d recommend auditioning the VT80 SE in your own home before buying it.

Although the $35K USD level VTLs were in another class entirely, the VT80 SE was the most neutral sounding of all of these amps. The Tung Sol KT-150 output valves created neutral sonics that leaned towards warmth. The great thing is, if you don’t like the way the stock KT-150 tubes sound, you can *roll* the output tubes and install a matched quad of whatever you prefer. The amp will self-bias any compatible 8-pin output valves.

During my tests, I hooked the VT80 SE up to a variety of different pairs of loudspeakers. These included Sonus Faber’s Sonetto VIIIs, Bryston’s A2s, Audes’ Blues floorstanders, and Quad ESL-63 electro-stats. ARC’s beast let me hear the individual sonic personalities of each of these very different speakers with ethereal insight and transparency. 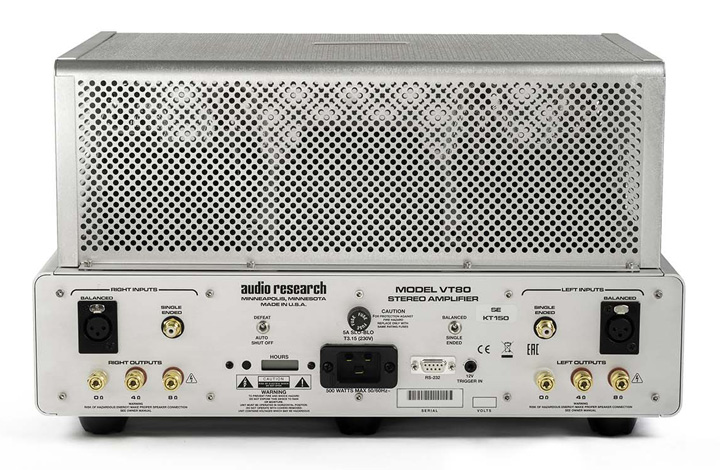 Released as a compilation album in 1984, Legend: the Best of Bob Marley contains 14 of his evocative songs. These include “I Shot the Sheriff”, “Jamming”, “Is This Love?”, “Buffalo Soldier”, and “Get Up, Stand Up”.

The VT80 SE let me hear the full cross-section of reggae instruments that were so deftly weaved into the sonic tapestry on all of Marley’s songs. If the music on this album doesn’t stir your soul, call a Priest to check that you still have one.

In particular, hearing the sonic layers captured in the gut-wrenching live version of “No Woman, No Cry” with such astonishing clarity gave me shivers. “Cry” carries a heavy emotional weight that’s simply undeniable. The VT80 SE’s palpable recreation of the slow, brooding organ notes and the crowd’s enthusiastic participation in singing along as the song progresses, elevated my experience from merely listening to the music, to becoming emotionally involved with it.

For perspective, I next tried something heavier. The original 1973 recording of The Stooges Raw Power album was re-mastered in 1997 by none other than Iggy Pop himself.

The raw, almost violent studio mix of the original 1973 recording is still there… in spades. The 1997 re-release, however, has less background noise and far cleaner sonics. The newer release also has better PRaT, fuller body, and more weight in the lower registers.

With bangers like “Search and Destroy”, “Penetration”, “Shake Appeal”, and the title track “Raw Power”, this album showcases the strangulation level of anger that Iggy and the Stooges so unapologetically blended into their early 1970’s proto-punk songs.

Listening to the anxious and threatening sound of the acoustic guitar that opens up the track “Gimme Danger”, the VT80 SE communicated the angst, anger, and tension of this song with frightening accuracy. “Danger” limps along like an emotionally wounded punk rock giraffe. Its bruised frustration builds and builds until it climaxes in a blinding head-banging rage. Hearing this raw emotion recreated with such startling dynamics and a palpable *feel* gave me shivers.

Thanks to Audio Research’s phenomenal sounding VT80 SE tube power amp, ageing audiophiles no longer need to take up amateur shark dentistry, downhill crotch-less bikini piano surfing, or nude skeet shooting to get the adrenaline fix they’re pining for. The sound of the VT80 SE was such a glorious thing that, at times, it gave me endocrine surges. Listening to this amp has become a shivering narcotic-like “fix” that’s like an addiction. Once you’ve heard it, you’ll want to listen to it more and more.

Utilized within any high-end two channel rig, the VT80 SE is capable of producing life-changing sound. Life is, after all, short and finite. There are no pockets in a shroud. When you die, you can’t take any money that you’ve accrued during life with you. If you love music, the long-term benefits of listening to Audio Research’s VT80 SE vacuum tube power amp will far outweigh its cost.