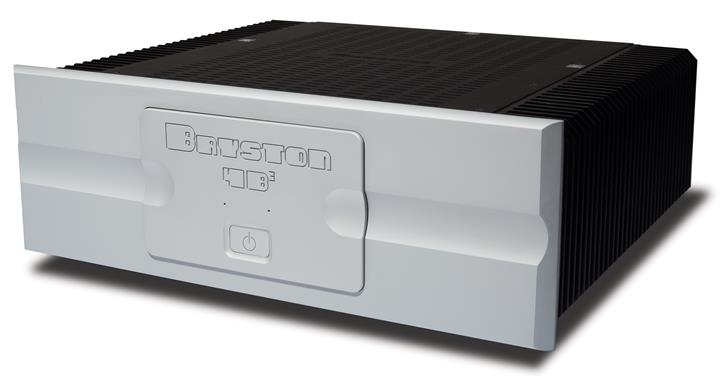 I’m well acquainted with Bryston products, having owned a 4B-ST amplifier, a BP6 preamplifier and currently using a 4B-SST2 as my reference amp. The 4B-SST2 has been a true workhorse as well as a means of enjoyment; hence, when I heard that Bryston was introducing a successor, their new “Cubed Series”, I immediately requested a 4B3 amplifier for evaluation. The 4B3 arrived at my door in late March and has seen continuous use ever since.

The new Bryston Cubed Series amplifiers are an evolution of the company’s SST2 design; however, rather than an evolutionary step, I’d call this one more of a leap. Why? From a technical perspective, all Cubed Series amplifiers incorporate a ground-breaking, never-before-seen input stage circuit design. This new ‘Salomie’ input stage, named after its designer, is so innovative that Bryston has obtained a patent on it. In fact, Bryston claims that the new Salomie input stage is more linear than anything the company has previously produced – an amazing achievement, given their historical prowess with linear amplification. Using twelve active devices in an array, the new input stage matches the amplifier to virtually any preamplifier and delivers the first 6 dB of gain. With a measurable distortion below 0.001%, it provides essentially perfect transparency. Along with this trailblazing input stage, the new Cubed Series has improved common mode noise rejection, and features a major improvement in EMI/RFI noise rejection that prevents unwanted interference from impacting the audio signal. In addition, for the energy conscious, standby power consumption has been significantly reduced, to less than 500 mW. The new Cubed series introduces some changes to the rear panel and also an updated aluminum faceplate. The new faceplate is now comprised of two pieces, rather than one (ignoring rack handles), with a cube-like central insert that allows the potential for future changes. At this time, Cubed Series updates have been implemented in all Bryston amplifiers, with the exception of the 6B and 9B models, which are expected soon.

The Bryston 4B3 is priced at $5,695 and offers similar specifications to its 4B-SST2 predecessor. Its power is conservatively rated at 300 watts-per-channel (wpc) into 8 Ohms or 500 wpc into 4 Ohms; and 900 wpc bridged mono into 8 Ohms. Harmonic distortion is rated at less than 0.005% (20Hz to 20kHz, at 300 watts); and signal to noise ratio is -110dB (single ended) and -113dB (balanced). For complete specifications, please see www.bryston.com. Options include the choice of silver or black faceplate, in a 17” width (without handles) or 19” width (with handles). A rack mountable Pro Edition is available in black.

The 4B, has been Bryston’s top-selling amplifier for many years, sitting mid-way in the series, in price and power output per channel. It was first introduced back in 1978 and has been through seven iterations since. The first two were simply called 4B, then came the 4B E, 4B NRB, followed by the 4B ST that was succeeded by the 4B SST and 4B SST² (a.k.a. Squared Series). The latest series, is the 4B3 (Cubed Series), which is the 8th generation, and it drops the ST initials of Stuart Taylor, who was attributed with the earlier designs.

From a fit and finish perspective, the 4B3 caries on the Bryston tradition of being built like a tank, weighing in at a hefty 63 lbs. In fact, at its price-point, I know no other amplifier that matches the 4B3 in its level of solidity. The front power button and the rear connectors are all top notch, well arranged and robust. The Cubed Series also sports a new bead blasted finish (in silver only), which gives the faceplate an almost suede-like feel and upscale appearance. My review sample was a silver, 19” version with handles and optional blue LED running lights. Whether the aesthetic of the Cubed Series floats your boat or not there is no taking away from the quality of construction, and the legendary 20-year manufacturer parts-and-labour transferable warranty.

I evaluated the 4B3 primarily with the Bryston BP26 preamplifier, though my resident Simaudio 350P preamplifier provided additional perspective. Source components were my Rega Apollo CD player and a Simaudio 280D DAC (with integrated digital music player), accessing music on my network and TIDAL HiFi. My analog source was a VPI Scout turntable, running through a Project Phonobox II SE phonostage. Cabling was all Nordost Heimdall 2, along with a QB8 power block. Loudspeakers were my quadral Aurum Montan VIII towers and my recently acquired Focal Electra 1008 Be 2.

I know that many owners of Bryston SST2 amps are wondering how their performance compares to the new Cubed Series and let me assure you that the sonic difference between the two series is in no way trivial. Substituting the 4B-SST2 with the 4B3 in my system, resulted in a very noticeable change in sound. Was I surprised? Yes, given how different they sounded and knowing the similarity in their specifications. Some subscribe to the opinion that ‘two well-designed, low distortion, linear amplifiers, when operating within their power band, will sound the same’ – all I can say is they have obviously not yet heard the 4B-SST2 versus 4B3.