All of us, in these difficult times, dealing with Covid-19 have been looking for something to occupy our time. If you’re like me, you’ve been doing some reading, a lot of binge watching and even more music listening. I’ve also been putting together this final installment of the Nordost QRT power products trilogy. If by chance, you haven’t read the previous two installments, its time to catch up: here’s Part 1 and Part 2.

The Nordost Qx4 Power Purifier, QKORE Ground Unit and QWIRES, along with the QBASE AC Distribution Unit, have proved to me their worth in my system. Now, I wanted to see if the Nordost QVIBE Qv2 AC Line Harmonizers ($349.99 US each) and QKOIL QK1 AC Enhancers ($249.99 US each) could make things even more interesting. For my listening tests, I used the Qv2 abd QK1 in combination with the other Nordost QRT products; however, all my critical evaluations were done with just them alone, plugged into the Nordost QBASE QB8 MKII power bar, switching between each of them to contrast their qualities. Though one of each would do, I found that two of each provided a considerably stronger effect and that’s just the way I evaluated them.

Both the Qv2 and QK1 are plug-in devices. Both with a compact cylindrical carbon-fiber patterned body (81.6 mm x 36.75 mm) and your choice of plug ends, US/UK/EU/AUS. Apart from their model names, printed on their bodies, the Qv2 and QK1 are indistinguishable but as it goes with books, these devices can’t be judged by their covers. 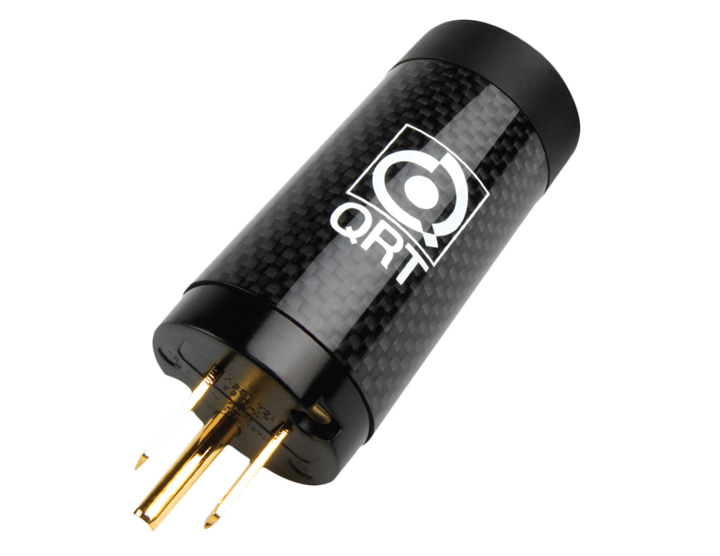 The Qv2 is what Nordost terms, an AC Line Harmonizer. Its purpose being to enhance the musical performance of an audio system or even picture quality, with respect to video. Nordost describes them as providing a pre-determined range of pulsed frequencies clocked to a 50 / 60Hz waveform, which is intended to reduce noise floor and improve imaging, presence and realism. Are you a skeptic? Well hold on, the proof is in the pudding. 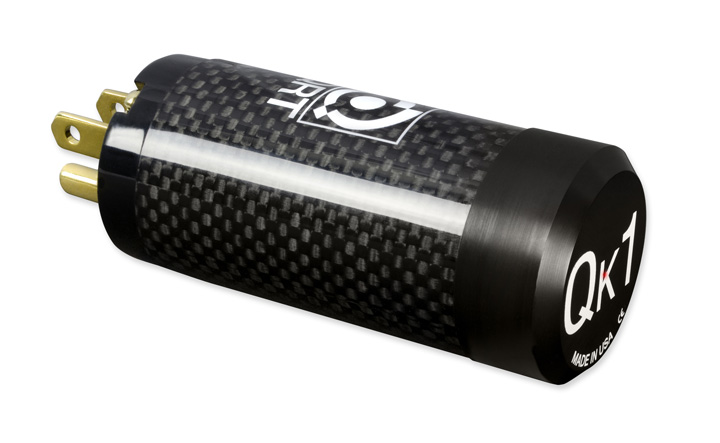 Different though complementary, the QK1 is referred to as an AC Enhancer by Nordost. It uses a load resonating coil (LRC) and Nordost’s proprietary MMF (micro monofilament) technology, that’s claimed to produce a passive electronic field with beneficial audible effects on the AC current. The intent of the QK1 is to prevent time delay and signal distortion, bringing the AC current closer to a “distortion-less condition”. The intended effect is to improve overtones, tonal balance, sharpness, depth, focus and pacing.

Both the Qv2 and QK1 are entry level products in Nordost’s QRT range and given the price of admission, will likely be the place many start to get their toes wet with QRT line of products. Though I used them with the QBASE power bar, I’m confident my results can be approximated with other power blocks or even direct with your wall sockets. Like all QRT products the Qv2 and QK1 have been engineered to provide cumulative benefits when used in concert with other QRT products, as well as when they are employed in multiples.

I began my trials with a pair of Qv2’s plugged into the QBASE power bar, on their own. The Qv2 AC Line Harmonizer produced an immediate and obvious effect. Listening to the wonderfully musical track “Gaia” by James Taylor, I took note of there being only a slight change in the soundstage definition; namely, it was the effect the Qv2 had on the twinkle of the wind chimes that caught my attention. With the Qv2, the wind chimes were less bright, their sharpness diminished but without any detriment to audible detail. The pulse of the synth was also softened by the Qv2 – less forward and less electronic, was the result. The music gained warmth in expression, along with a more relaxed feel.

Listening to guitar plucks, it was clear that the vibrato of the strings was significantly more developed with the Qv2’s in place and there was also a richer quality to the vocals. The Qv2 noticeably provided a smoothing on sibilants, yet the most dramatic effect of the Qv2’s was in how they separated details, in this case with the background vocals. The mass choral became substantially more individualized; the Qv2’s unmasking the differences between the voices and adding greater spatial distinction. The lift in the level of realism was substantial, transforming a canvas of voices into three-dimensional figures across the soundstage.

Still focusing on the Qv2’s, I gave listen to the track, “Over the Rainbow” performed by Israel Kamakawiwo’ole. The elastic qualities of Ukulele strings were enhanced with the Qv2’s, leading edges were deemphasized without any loss in the sense of rhythm and pace. The image of the instrument also increased in size, gaining additional body and physicality. Focusing on Israel’s voice, it was clear that the Qv2’s drew out a smoother, richer and more embodied character from the recording. Being close-mic’d, the recording allows one to hear every breath and inflection; however, with the Qv2’s those breaths gained a more lifelike quality, with the chest and airway of the signer more evident. In contrast, without the Qv2’s, vocals were drier and the hiss of breaths across the mic becoming a distraction to the more meaningful musical expressions.

Removing the Qv2’s, and putting the pair of QK1’s in place, I found some similarities. As was the case with the Qv2’s, the QK1’s seemed to remove some etch and exaggeration of the leading edge on notes, while allowing natural resonance on string instruments to be easier to hear. Yet, there seemed to be more rendition of speed and pace with the QK1 verses the Qv2. I might describe the QK1 as having a slight lean to the Ying (speed and timing), while the Qv2 to the Yang (naturalness and relaxed expression), each of them having their own appeal. These differences rang true in the manner that the sibilance was handled in Kamakawiwo’ole signing of “Over the Rainbow”. Both the QK1 and Qv2 raised the sense of realism by revealing greater harmonic complexity, however, the QK1 suppressed sibilance to a lesser degree and favoured focus, while the Qv2 suppressed sibilance to a greater degree and favoured warmth and smoothness.

It was on a couple tracks that I nailed down what the QK1’s most defining attribute was in my system, setting it apart from its Qv2 sibling. Listening to the track “Gaia” by James Taylor, at the 4m:10s mark, the magnificent drum roll was raised to all-new levels with the QK1. With the QK1’s the sense of dynamic speed, as well as the perception of tangible impact on the drums was revelatory. There was more clarity, speed and punch to the percussion, putting an ear-to-ear grin on my face. Going over to the song, “Limit to Your Love” by James Blake, the effect of the QK1 on the piano key, again, proved its ability to raise dynamics to more lifelike levels. The benefits of the QK1 was also to be heard on the droning bass notes – more texture, attack and overall clarity.

We’ve talked about the Qv2 and the QK1 separately but bringing them together was another experience unto itself. With all four (two Qv2’s and two QK1’s) plugged into the QBASE, the best of both was achieved. There was greater warmth, yet also greater focus and pace. There was an increased sense of naturalness but also a greater measure of dynamics. And then, there was a significant increase in three-dimensional imaging and separation. No denying it, these relatively meager looking devices, the Qv2 and the QK1, as effective as they were individually, were considerably less than they could deliver together. Symbiotic for sure but more like a pair of lovers working in rhythm to satisfy each other’s needs moving to that…well, I think you get the idea.

Like all good things, this Nordost QRT product series evaluation too must come to an end. Hopefully, it’s provided you with some valuable insight. If you’re skeptical, that’s understandable; all worth investments should be questioned but it is curiosity that drives discovery. Now the question is, ‘are you ready to discover?’

For more info about Nordost products, check out www.nordost.com