I’m no stranger to Nordost products. I’ve been using Nordost in my own system for just about 5 years; Norse cables, including Heimdall 2 and Tyr 2, with a QRT QBase-Mark I Qb8 power distributor and a set of Nordost AC Sort Kones. Together, these Nordost products have taken my system to a higher plane of performance. Not only has my system been more transparent than ever but more importantly, they have allowed my system to sing at their best, providing countless hours of musical bliss.

Over the last few years, Nordost has been continually expanding its QRT power product series. Along with updates to some of their earlier QRT products, like the QBase, now in a Mark II version, there are now a half-dozen other models within the QRT power product series. These include: the QX Power Purifiers; QVibe (QV2) AC Line Harmonizer; QKoil (QK1) AC Enhancer; QKORE Ground Unit and QKORE Wires; as well as the QLINE Ground Wires. Most recently Nordost also released the QPOINT Resonance Synchronizer and the QSOURCE Linear Power Supply.

My experience with adding new Nordost products to my system has always been hearing an uplift in performance. Sometimes those improvements have been marginal but more often, I’ve found them to be very significant, on par event with upgrading an actual component. It’s with this experience that I approached auditioning a broader set of Nordost QRT power products. I decided to try from the Nordost QRT Series: a QX4 Power Purifier; QKORE Groud Unit with QKORE Wires, and; a couple Nordost Qv2 and Qk1 modules. Along with this, I swapped out my Mark I Qb8 with their Mark II version. What was the result? To do these products justice, I’m going to tell you about my experiences over a three-part series. So if you like what this article has to say be sure to stick around for the upcoming segments.

The ethos of Nordost’s QRT power product series is the effective reduction, if not elimination, of the negative impact from sub-standard AC and DC power on audio and video electronics. Nordost claims to achieve this by controlling ground flow, limiting EFI and RFI as well as timing errors on the AC line, and ensuring a clean and stable flow of current. Yet the QRT series aims to deliver on this without any limiting on power flow and current delivery, which are critical to a system’s performance. In addition, the Nordost QRT power product series has been developed to allow you to implement products from the series individually or concurrently. When used together, Nordost asserts that QRT products are designed to provide cumulative benefits.

Before I get into the telling you about the QX4 Power Purifier, I want to mention the QBase, Qb8. Beyond being a power bar that provides you with 8 grounded outlets, the latest QBase Mark II, is designed to provide a straight-line AC path to all outlets, with a star-earthed topology for optimized ground. I evaluated the Mark I version sometime back and can attest that the Mark II is all that the Mark I was, and then some. Though I won’t get into the Qb8 in this series, please read about my former experiences in this prior review: https://novo.press/upgrading-an-audio-system-with-nordost-norse-2-heimdall-2-cables/. 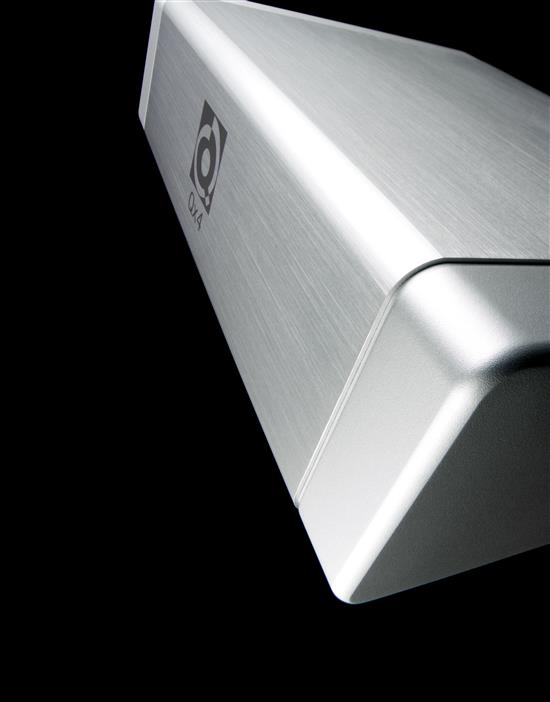 Now, the Nordost QRT QX4 is the big brother to the QX2 and contains 4 vs. 2 QRT field generators, as their names suggest. As much as the QX2 can provide in terms of improving on poor-quality AC power and reducing both RFI and timing-errors, the QX4 is built to do more. For this evaluation, I used a single QX4 in my system.

The chassis of the QX4 is purposefully designed and mechanically tuned. From its dimensions, to the use of billet aluminum for the chassis end caps and even its weight, the QX4 has been engineered to achieve a specific optimized mechanical tuning and resonance control. Typical power conditioners use filters to achieve their objectives, but with filters there are negative side effects, including decreased dynamics and dimensionality. In contrast, the Nordost QRT QX4 does not employ any filtering and is said to avoid any such negative side-effects. Instead, the QX4 uses field generators, which don’t impede power flow, nor limit source impedance or peak current. These field generators target the source of power problems, specifically the negative effects of EMI and RFI, while also ensuring a consistent and regular AC waveform. In addition, the QX4 does not induce any voltage swing limiting nor alteration of AC supply impedance, instead, Nordost claims it adds order and coherence, producing close to a 50% reduction in gross error. The billet end caps, above being a resonance control, also act as field generation bookends, containing and directing the field vertically rather than horizontally. Accordingly, Nordost insists that using the QX4 at the vertical centre of your system components should deliver the greatest improvement on EMF and RFI reduction. 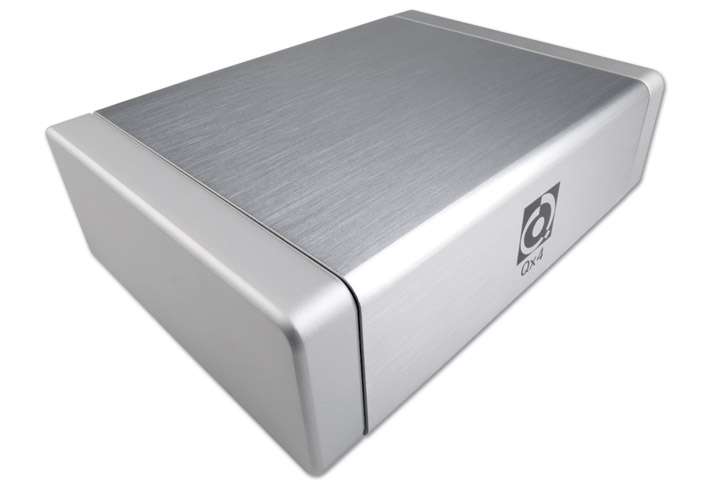 With the QX4 hooked up in my system, between the wall outlet and Qb8, I got down to work. Though l listened to a host of tracks via Tidal HiFi music streaming, one of my favorite go-to test tracks allowed me to get a broad sense of QX4. The track, “Gaia”, the artist, James Last. On the treble frequencies, the QX4 seemed to have a civilizing effect. Though the delicate shimmer and twinkle of chimes on the opening track remained pristine, they sounded less forward when the QX4 was connected. The opening synth notes also were less forward, having a lighter, airier and more delicate presence. Paying attention to the ride cymbal, its attack was clearly less aggressive but there was something more to what the QX4 was providing. The cymbal strikes now could be heard distinctly, each strike in time. With more listening it was apparent that the strikes were more focused, more separated. There was a blur between the notes that had been effectively stifled with the QX4. The QX4 allowed me to hear not only the notes more clearly but also the quiet between them, adding to insight on the artist’s technique and providing me with a greater appreciation for the music.

Before I move onto midrange, I should speak about what the QX4’s treatment of sibilance was. Listening to several recordings, the QX4 proved its ability to consistently deliver a more natural and smoother vocal performance when presented with sibilance. The result, a more relaxed and natural sounding sibilant and the absence of any Sylvester the Cat ‘suffering succotash’ hissing ‘s’ sounds, most noticeable on close-mic’d female vocal recordings. Put on an album like Patricia Barber’s Mythologies and the QX4 will demonstrate its skill in quelling any sibilance exaggeration. In short, the QX4 allowed vocal performances to sound much more authentic, absent of any synthetic remnant.

As much as I fully appreciated the benefits brought on by the QX4 in the treble, it was what the Nordost QX4 could deliver with the midrange that had me nailed to my seat. There was additional warmth in the midrange but along with this warmth came a sense of additional dimensionality and greater freeness and flow. Low level details became more apparent with the QX4 in play. For instance, the tones of the synth on ‘Gaia’ now revealed a gentle pulsing, something that was unnoticeable in the absence of the QX4. Strings on the guitar, though less forward in the mix, now possessed a more natural timbre, as if released of some tension. The reverb of this instrument’s wooden panels became more evident and there was greater delineation of the individual strings. Yet, what was most thrilling to hear were voices with the QX4 connected. James Last’s voice gained more body, sounding a little larger, while taking on a substantially stronger dimensional presence. It was as if the dial on holography had been turned up and James now had a greater sense of physical presence. This sense of focus and dimensionality to vocals, proved itself true with the background singers on the track, as well. Here, multiple voices singing in mass, were now individually distinct to the degree that I was able to point out separate singers in the mix. Freda Riding’s “Lost Without You”, also produced a similar revelatory effect. The siren’s beautiful voice became that much more embodied with the QX4, any sense of dryness and haze removed, accompanied by increased musical nuance. On this recording, there’s an echo of her voice that can be heard but the QX4 allowed this echo to be appreciated more clearly and distinctly from Freyda’s voice, giving a greater sense of a space in which, the performer was signing. Once again, clearer delineation with a heightened sense of realism was just what the QX4 provided.

In terms of bass, the QX4 delivered bass in a heavier and fuller measure. Bass guitar sounded heavier, yet along with more meat to chew on, there seemed to be reduced texture. On Freyda Ridings, “Lost Without You” bass notes were more rounded, thicker too, the extra girth to the low notes sounding a little slower and also a little less vibrant than in the absence of the QX4. I checked my perceptions over some more tracks. With the track “Time” from the Inception Soundtrack, by Hanz Zimmer, the tuneful and textured bass notes, both percussion and synth had definitely more heft. This weightier presentation came across as darker and a little more relaxed, the tension in the bass somewhat reduced. Was the QX4 sedating the bass or was it letting me hear it as it was intended? With further listening I decided that the QX4 was undoubtedly capable of delivering deeper, darker and weightier bass; yet, along with this there was a trade-off in bass articulation. Might this be different in another system, perhaps; hence, with the QX4, when it comes to what it imparts on bass, an audition would be my recommendation. That said, things changed when I added the Nordost QRT QKORE/Wires but that’s for my next article – so you’ll need to wait and see.

Before I wrap, I need to tell you about the QX4’s effect on soundstage. Though my system is in no way lacking in this regard, delivering incredibly wide soundstages, where the recording calls for it. The QX4 surprised me with its ability to reach even farther out in width as well as depth. Though width was somewhat increased, the QX4’s delivery of blacker background and a lower noise floor, served up a darker canvas that allowed the faintest details to be more easily hear and distinguished. With low-level dimensional cues more apparent there was an appreciable increase in soundstage depth. And, along with this the QX4 provided improved image separation.

Sweeter, airier and more resolved high frequencies; richer, smoother, more fluid and holographic midrange; and, fuller, weightier bass with improved imaging and soundstaging. Does that sound like more than a power product should deliver? It may, and yet it is just what my experience was with the QX4 in house. If you have assembled a system that you are most happy with, perhaps it might be time to try for yourself and see what a Nordost QX4 might offer.

Be sure to tune in for the 2nd and 3rd installments of this series at www.novo.press in the next few weeks.