Wandering the halls and corridors and without benefit of a press badge, I spoke to old friends, made some new ones and took some pictures. I’d like to share some of the highlights with you.

NORDOST, SIMAUDIO MOON and GERSHMAN ACOUSTICS
One of the highlights was the Nordost room. I didn’t hear any of their A/B demos this time highlighting the impact of one of their products. This time the system was simply playing a variety of tracks while the components stayed the same. And why not, when you’re featuring the six figure Posh speakers from Gershman Acoustics, based just a few miles north of Toronto.

Eli and Ofra Gershman, the owners, are frequent exhibitors and I have always been impressed by their loudspeaker designs. Eli has pulled out all the stops for the Posh, which is physically adjustable in various ways to make the best out of your listening room, like some Wilson Audio speakers. But the aesthetic here is very different and far more modern and svelte. I hope to review a pair of Posh speakers soon. Feeding them in the Nordost room is an Antipodes Music Server, and a stack of Moon electronics from SIMAUDIO, including a 780D v2 Streaming DAC ($19,500), an 820S Power Supply, a 740P Preamplifier ($9,800), and two monobloc amps, 860A V2s I believe. Nordost provides the QRT power components including the new QPOINT Resonance Synchronizer and QSOURCE Linear Power Supply, the QBASE AC Distribution Unit, QKORE Ground Unit QX Power Purifier and of course a set of the magnificent ODIN 2 cables. This was a very relaxed and musical sounding system which was a pleasure to return to during my stay. 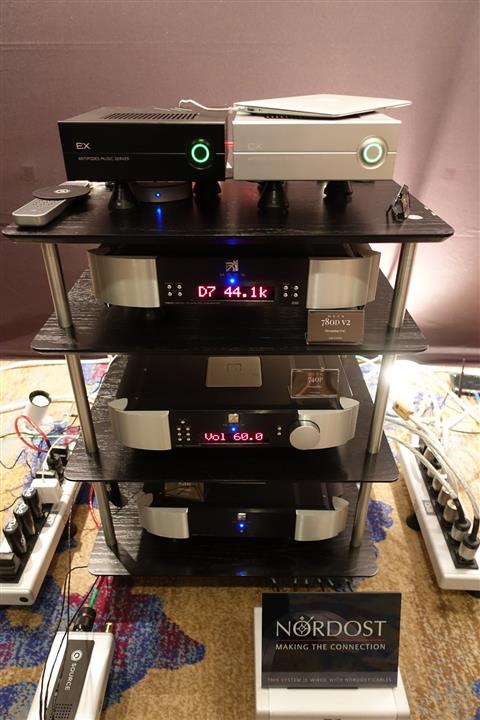 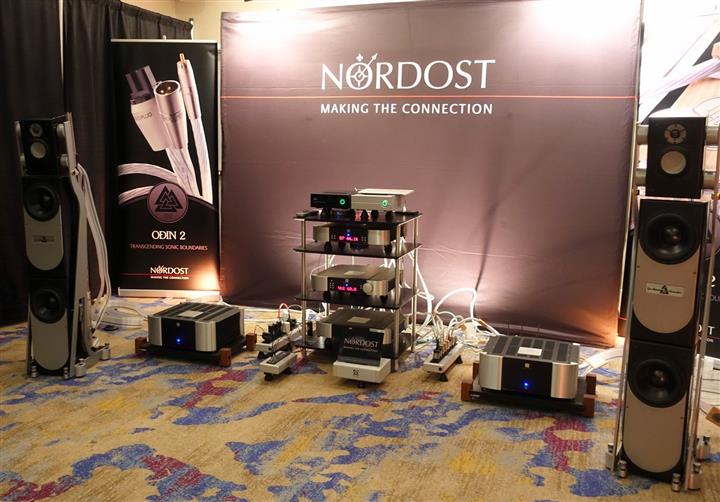 WYNN AUDIO
Wynn Audio can always be counted on to have some of the best sounds of the show. In their very spacious room we heard Tidal Contriva G2 speakers, weighing in at over 100 Kg each, with electronics from Karan Acoustics sitting on racks and platforms from Critical Mass Systems. 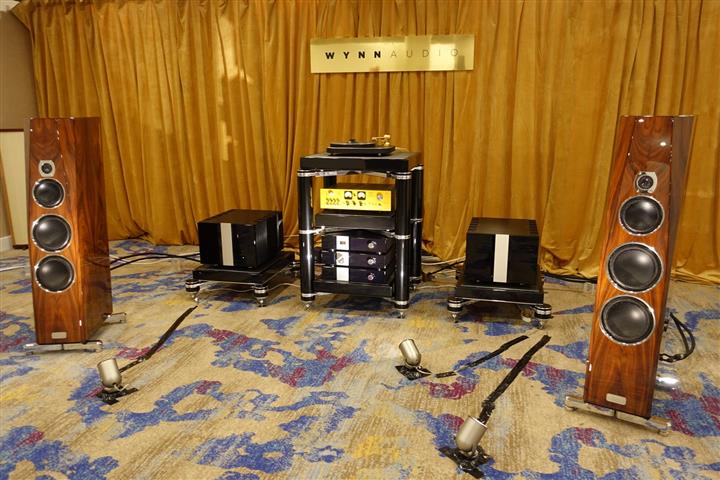 The analog source is the Thales Turntable with Thales Arm. Also on display – the spectacular Kalista Dreamplay CD Player. 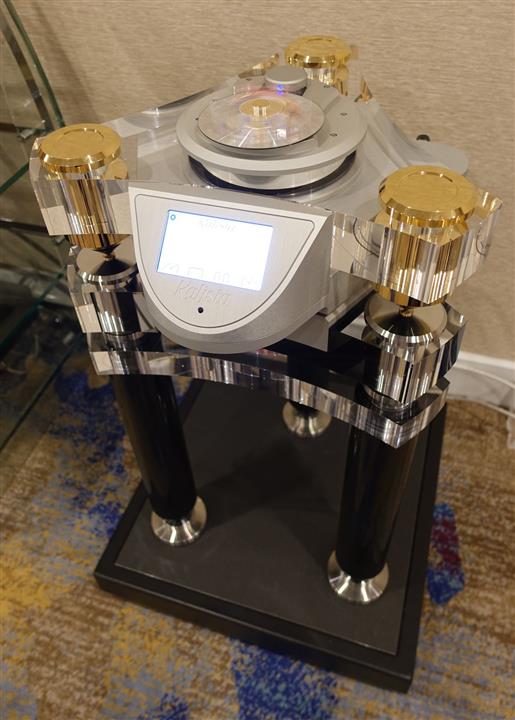 WOO AUDIO
Plenty to enjoy for headphone aficionados in the Woo Audio room. I was very impressed with the new Woo Audio Topaz WA11 headphone amp / DAC ($1,399 US), which can run for 6 hours on battery power. 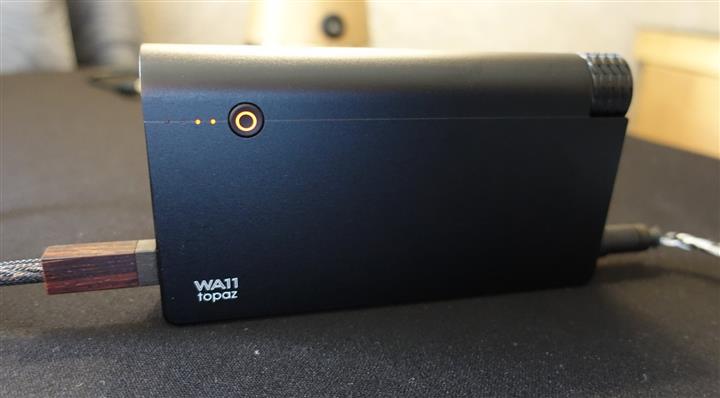 This very compact solid state device is a follow up to the very successful tube based WA8 portable headphone amp. Unusually the WA11 features two USB C connections – one for data, one for charging. I partnered it with the MYSPHERE 3 headphones, designed by the same guy that dreamed up the amazing AKG 1000 phones, which were so inefficient you had to connect them to the speaker terminals of your amp. Now efficient enough to be driven by a battery powered device, the MYSPHERE 3 again holds the speakers at an angle to and floating well clear of the ears. Remarkable, and not inexpensive at $3,999 US. 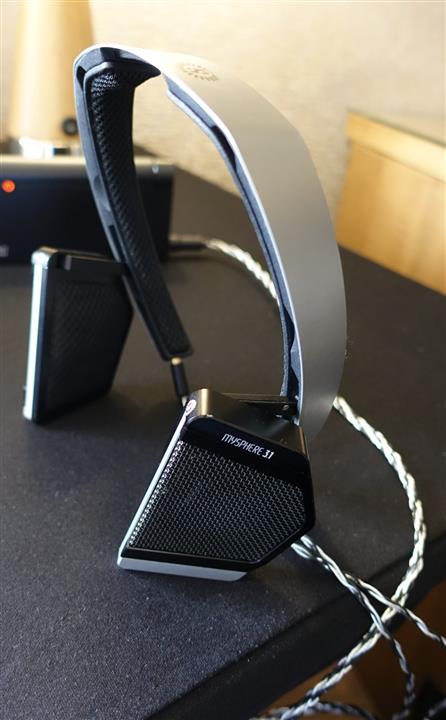 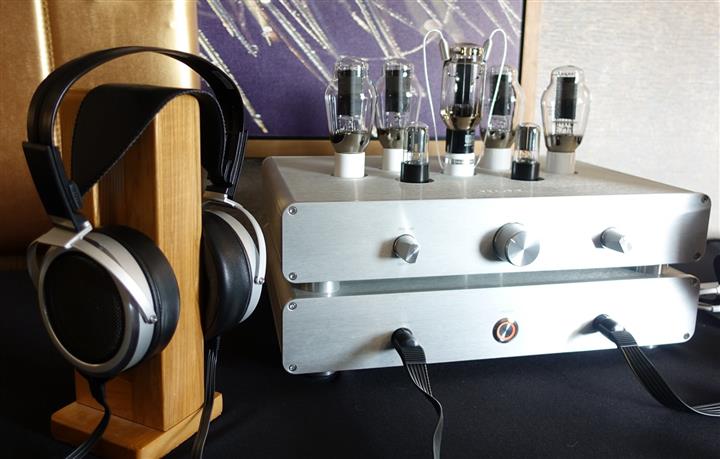 I was able to directly compare the SR-009 to the SR-009S since the 3ES has two outputs. Clearly cut from the same cloth, the S model has a stronger base and images a little better, while maintaining all the strong points of the original. I was happy to observe that hum was non-existent, even at a high volume setting. I think the extra cash is worth paying if you are buying STAX phones for the first time, but if I were an owner of the SR-009 I would be very happy with what I had.

STENHEIM and DARTZEEL
I’ve been very impressed with a number of Swiss audio manufacturers recently, so much so that I have bought my own stereo power amp from Soulution. At the Munich Show earlier this year I spent a lot of time with the Nagra team, learning and listening, and boy have their DACs and amps come a long way. At the Audiofest I ran into Stenheim for the first time, and I am smitten. Their speakers are easily overlooked, as they are so rectangular in an era of smooth curves. But take a closer look and you’ll see spectacular standards of construction and finish. More importantly, these speakers know how to reproduce a concert grand piano. I hope to review their middle model, Alumine Three, in the coming months. 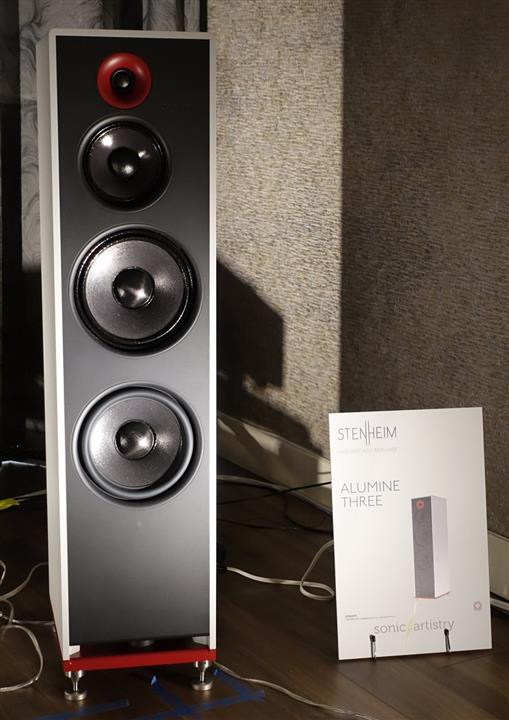 Alumine Two is a bookshelf design, the Alumine Five is a 3-way 4 driver floor standing speaker available in three versions. The standard version weighs 100 Kg, as does the Special Edition SE, which has upgraded components including the crossover, internal wiring and connectors. Above these two models, sits the 130 Kg Signature by JC Gabriel, which brings you an external crossover, front leather baffle, massive aluminum platform, dedicated internal wiring and special tuning for each speaker. Alumine Three weighs in at 70 Kg, and come outfitted with bass and midrange drivers of 8” (2) and 5.25”, in place of the 10” and 6.5” drivers of the Alumine Five. These are remarkably efficient speakers and feature massive aluminum cabinets with 3 independent chambers for the Alumine Three (4 for the Alumine 5). In fact, the Alumine Three is a new speaker, aiming to produce as much as possible of the Alumine Five’s goodness in a more compact package – 105 cm tall instead of 120 cm. Now it didn’t hurt that the Alumine Three was being driven by a new integrated amp, the CTH-8550 ($20,300 US) from Swiss high end manufacturer darTZeel which I can’t wait to get my hands on. 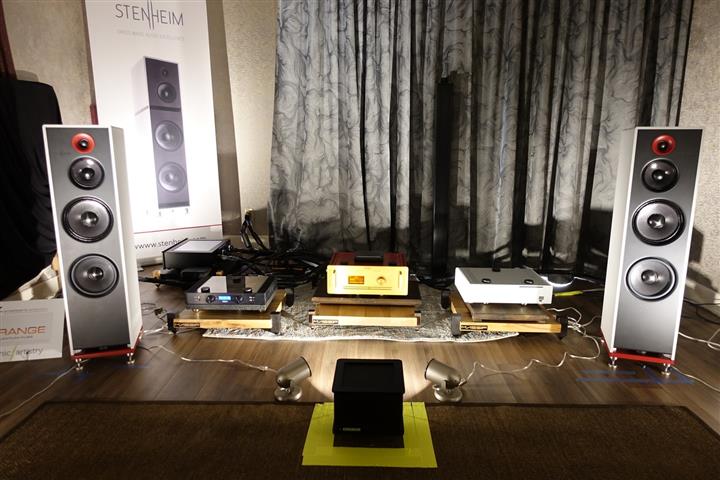