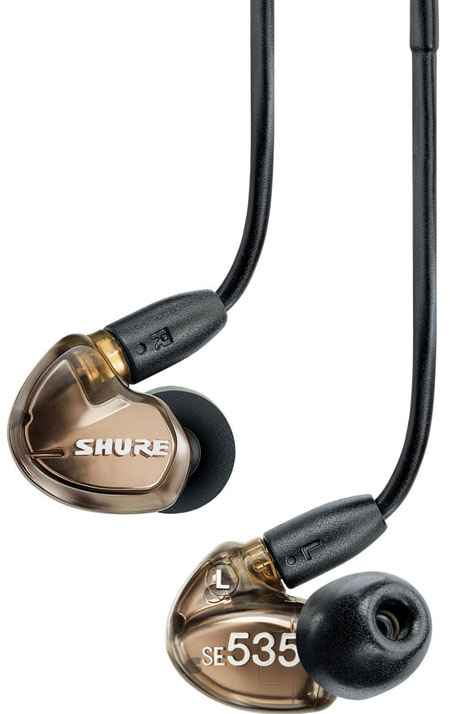 Shure Incorporated had its humble start in Chicago, founded by Sidney N. Shure back in 1925.  The company in those days was simply a radio parts company.  Fast forward 88 years and the company has grown considerably in size and diversity; now a manufacturer of both consumer and professional audio-electronics.  Though Shure has had over half-a-century in manufacturing microphones and pro-gear, it wasn’t until 2006 that Shure made their mark on the consumer earphone/headphone market, specifically with their triple-driver E500 Sound Isolating Earphones.  Since then, there has been no looking back, with Shure continuing to expand on its consumer earphone/headphone products.

I’ve heard many great things about Shure products over the years, so when offered the chance to try their flagship SE535 Sound Isolating Earphones, I was quick to say, “Sure!” or in this case “Shure!”  The SE535 earphone ($500) has been Shure’s flagship universal-fit consumer earphone product since January 2010 until now.  Just as I began writing this review, I got wind of some breaking-news that Shure will be introducing a new earphone this June – the SE846 (a quad-driver in-ear universal-fit model costing about twice the price of the SE535), which will supplant the SE535 as their flagship consumer earphone.  Great news but let’s get back to the SE535.

The SE535 comes in typical cardboard packaging but I was delighted to find an impressive brushed black metal tin inside – military like in form and feel.  Slipping off the lid revealed an internal box together with a black semi-hard zip-case.  The box contained the earphones nestled in a foam block and the oval zip-case hosted a plethora of accessories. The zip-case included a ¼” plug adapter, airline adapter, inline volume control and an assortment of different ear-tips (9 pairs plus the pre-fitted set) – enough choice for virtually anyone, I expect.  There was also a handy little cleaning tool for the earphone nozzle, just perfect for those of us with less than immaculate ears.

The SE535 earphones, in their standard Metallic Bronze finish (Clear, a transparent version, is also available) had a definite pro-like, no-nonsense look and feel – plastic but of high quality.  The detachable and durable Kevlar-reinforced 64” cables use gold-plated MMCX connectors that swivel 360 degrees and incorporate wireform on the last few inches that allows them to be formed around the ears.  Once I got accustomed to fitting the SE535, I found them very comfortable and superb at isolation – the memory foam tips were my choice given that they served as form-fitted ear-plugs.  It took me – well, let’s just say a few days, to get proficient at inserting them. The procedure goes like this: unravel the cables, pinch the ear-tips, decipher left from right, swing out the cable-loops, tuck and hold in place as the tips expand and seat, while concurrently wrapping and forming the cable loops over and around the ears and hope you got them seated deep enough – okay, now exhale.  The truth is that I got some very strange looks from people on the morning train, as I practiced this routine the first week.  At least once, I blundered to the point of conceding failure and nonchalantly tucked them away in my pocket.  I did eventually get good at it but I’d never describe the SE535 as tuck-and-go earphones.  All that said, once in, the SE535 is the best fitting and quietest in-ear-monitor (IEM) that has graced these humble ears, to date; worth the effort.

The design of the Shure SE535 is a far cry from ordinary.  Rather than the typical single-driver earphones you commonly find, the SE535 actually uses three separate micro-drivers, within each earphone capsule.  The tri-driver complement is not a three-way arrangement but rather a two-way design with a dedicated tweeter paired to dual woofers.  The combined sound of these three micro-drivers is channeled out via a unique earphone nozzle (see Figure 1).  All this innovative engineering comes in thanks to Shure’s experience in the professional personal monitor arena.  The SE535 has a listed sensitivity of 119 dB SPL/mW; a frequency range of 18 Hz – 19,000 Hz and a very impressive noise isolation of up to 37 dB – beating a number of earplugs out there. 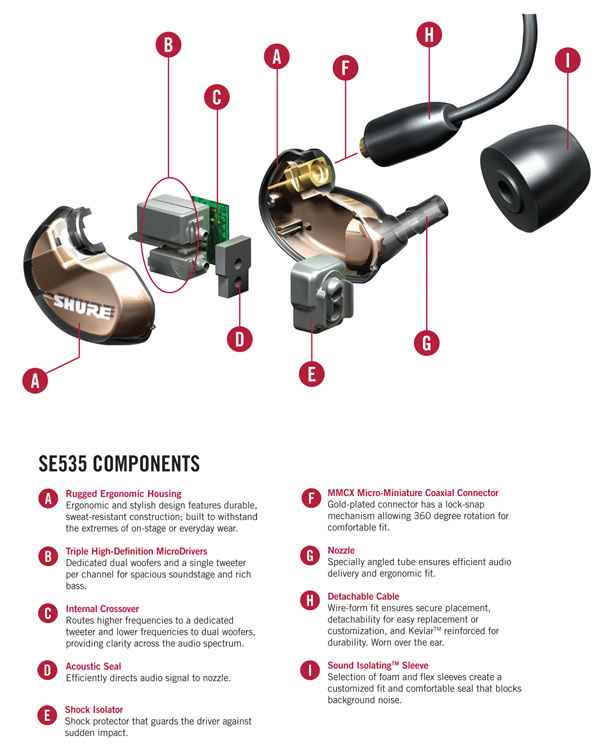 I’ve never used an IEM at the price-level of the SE535, in fact, the nearest priced references I had on hand were my Paradigm Shift e3m ($129) and B&W C5 ($179) IEM’s.  Given the higher price of the C5 and its incisive nature, I decided to use it as my primary reference for evaluating the Shure SE535 against.  One of the albums I used in my evaluation was Mumford & Sons very popular album, Sigh No More.  Listening to the title track, I was smitten by the level of string detail, every twang and squawk of the strings against the frets came across vividly.  Very interesting was the way in which the SE535 managed to distinctly separate the echo of the venue from that of the natural reverb generated by the body of the guitar, while maintaining cohesion between these elements.  Main and back-up vocals were layered to a level that I haven’t heard from earphones before – with the main singer clearly upfront of the back-up vocalists but this was not just a play on volume but rather an impressive rendering of space and position within the soundstage.  The echo of these voices against the surrounding walls was obvious.  Bass notes were natural in fullness and depth with the vibration of the strings coming through insightfully.  The midrange had pleasant sweetness and warmth and was well integrated with both the higher and lower frequencies.  With some more energetic strumming on guitar strings, precision in reproduction remained solid, while dynamics provided a real feel to the music.  I was pretty enamoured by the level of texture and harmonics that the SE535 was capable of delivering.  On this point, guitar strings were identifiable as being nylon or metal – so revealed were the harmonics and tonal colours.  At the climax of this song there is a lively combination of guitar, banjo, percussion and horns that can sound busy and congested on less than capable transducers.  Not the case with the SE535 – as it surfed its way through the veritable haze of instruments, providing clear separation between them and allowing individual details to be easily focused on.  The dynamic rendition and contrast between low and high elements was just superb.

In comparison, the B&W C5 provided a noticeably leaner midrange that was less forward.  Layering between main and backup vocals was not apparent, as had been the case with the SE535; rather the C5 placed them within the same plane.  Bass through the C5 was noticeably heavier and perceivably deeper but in an exaggerated manner, losing some realism and giving up some detail.  Guitar strumming through the C5 sounded thinner and less textured, with the peak of the plucks highlighted and short on sustain.  Variations in nylon and metallic string tones were much less evident with the C5 than with the Shure, to the point of going unnoticed, and there was less brilliance to string notes.  That said the B&W did an admirable job of sorting out individual instruments within the busy climax and conclusion of this track.

Another recording worth noting is Companion, a Patricia Barber album that has had much praise.  The track Black Magic Woman is a superbly transparent recording that is great for evaluation.  Being a live recording, it carries natural ambient sounds, which, when paired with a high performance playback chain, can provide an intoxicating “you are there” experience.  With the Shure SE535 in my ears, the opening clapping came across in an impressively realistic manner with the echo of the venue providing a real sense of space – in this case the Green Mill Jazz Club in Chicago.  The shakers were palpable with incisive detail paired with convincing micro-dynamics.  Not only could the granules be heard moving within the shakers but the impact of these granules striking inside the shakers themselves was felt as much as heard.  With the Hammond organ, tones were clear, warm and harmonically complete, with each note being a complex blend of sub-tones.  Wind chimes were detailed, fragile and natural with chime, sparkle and sustain.  The strikes of the bongos were dynamic with the sound of skins and of the body apparent and accompanied with realistic reverberation and sustain.  Moving to the upright bass, string plucks were well controlled – their pulsating nature and sinewy texture preserved in good measure.   Amazingly, the midrange was not only wonderfully transparent but also smooth with a natural measure of warmth, if a touch forward, more noticeable at high volumes.

Listening to this same track with the B&W C5 was very enjoyable but clearly short of the performance provided by the Shure SE535.  The fundamentals of notes and details were there and pleasant in their own right but much more simplistically portrayed.  For instance, the opening claps were thinner, less complete and therefore, less realistic.  The wind chimes carried delicacy and sparkle but were missing the complexity in their ring as heard with the SE535 and the same went for the organ tones and the bongo strikes.  Sustain was reduced, textures curtailed and the tonal palette simplified.  The C5 delivered bass and kick drum with impressive weight and extension but in an exaggerated manner, compromising realism.

Listening to the Shure SE535 was a revelatory experience. In comparison to a high performing earphone such as the B&W C5, the Shure SE535 showed there was more to be heard and more enjoyment to be had in the music.  If I had to provide criticism, I’d say they could do with just a touch more bottom-end weight and a little extra air but these are truly nit-picks and likely a matter of personal preference.  Overall, the Shure SE535 has given me a new performance bar for earphones – able to produce incredible detail, dynamics, speed, texture and tonal colour.  At their $500 price, these earphones have a fair bit of competition but given their quality and performance, I believe they are a formidable competitor and well worth the price of admission – highly recommended.