Three Approaches To 3D At Home 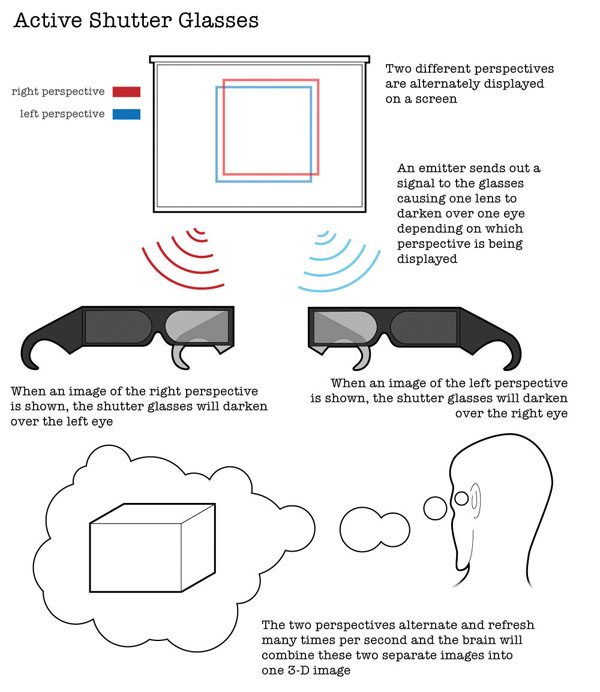 In-home 3D has been out for almost two years now and while it hasn’t made the in-roads that manufacturers had hoped, it is still a prominent part of most manufacturers’ offerings with additional models continuing to support the technology and constant improvements in picture quality. Most new home theatre receivers, Blu-ray players and other components, by default, include 3D support to ensure that if consumers do make the transition to 3D-capable content, they don’t have to upgrade, yet again.

3D content is also becoming more prolific with the release of numerous movies by major Hollywood studios such as the Green Hornet, TRON: Legacy and others. Two separate, dedicated 3D channels are also set to launch shortly, ensuring a steady stream of 3D content. For those that do not want to wait, a handful of consumer devices are now 3D-capable, allowing consumers to quickly and easily shoot their own images and video in 3D. These devices include everything from 3D-capable Android smartphones and tablets (by HTC and LG) to point-and-shoot cameras as well as camcorders from manufacturers such as Sony and Fuji. Fuji’s 3D point-and-shoot camera is even included with select LG 3D HDTVs to allow consumers to immediately create and enjoy 3D content out of the box.

3D continues to evolve and improve, giving consumers more options and even allowing certain sets to ditch the glasses altogether. The different technological approaches to 3D each have their pros and cons, which hopefully will narrow and/or be eliminated as technology improves, but currently, these differences force consumers to make a choice between them and subsequently lock themselves into one technology. The different technologies are explained and compared below.

The first 3D-capable HDTVs and projectors on the market employed “active shutter” technology to produce 3D. These sets create the 3D effect by simultaneously alternating the image shown while correspondingly alternately blacking out the lenses of the active shutter glasses worn by the viewer, allowing different images to be shown to each eye. The viewer’s brain then interprets the two slightly offset images shown to the left and right eyes as a 3D picture. The active shutter effect of the glasses happens very quickly and is imperceptible to the human eye. On a side note, approximately 10 percent of people cannot see 3D images produced by this artificial 3D technology.

The advantage of this methodology is that each eye receives the full 1080p resolution image, ensuring that all picture details are preserved. The disadvantages are that the glasses slightly darken the image due to the active shutters (though this is constantly getting better); the glasses are larger and heavier than simple passive 3D glasses (covered in the next section); the glasses are relatively expensive, costing $50 to $200 per pair; and the glasses are battery-powered and require charging. The flickering effect of the active shutter glasses can also cause nausea in certain viewers and some viewers cannot use the glasses for extended periods of time. Active shutter glasses from one manufacturer also cannot be used with another manufacturer’s displays. Third-party manufacturers have however stepped in and created glasses that can be used across different brands.

On the display side, the biggest disadvantage of active 3D displays is that since they alternate between displaying images for each eye, the effective refresh rate is halved, with half the frames going to the left eye and the other half going to the right eye. A 120 Hz refresh rate would therefore be effectively reduced to 60 Hz for each eye. This can lead to ghosting effects, crosstalk and motion-related image artifacts and is the reason why active 3D systems typically have higher refresh rates like 240 Hz (120 Hz for each eye). 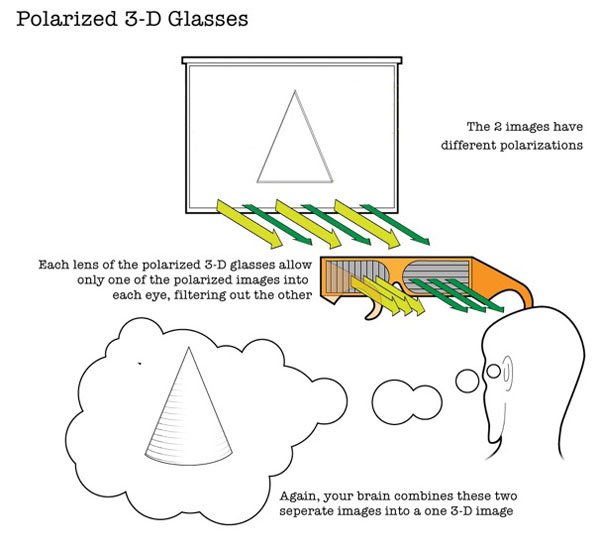 The second, commercially available 3D technology utilizes passive 3D glasses. Passive 3D technology works by simultaneously displaying images for both eyes. These images then pass through a polarizing filter on the display, which alters the images into vertically and horizontally polarized images. The passive, polarized glasses then filter the incoming images, sending one image to each eye.

These are the same type of inexpensive glasses used in movie theatres. The main advantage of this technology is that the simple, plastic, polarized 3D glasses typically cost less than $20 a pair, with some going for as little as $2, making 3D viewing a much more affordable proposition for those with numerous viewers. The glasses are also much lighter, don’t house any electronics and therefore don’t require batteries. Traditional eye-wear manufacturers such as Oakley are also creating stylish eye-wear utilizing circularly polarized lenses, drawing from their experience with polarized sunglasses.

Another advantage of passive 3D technology is that because the glasses don’t use active shutters, there is no flickering which can cause some viewers headaches and nausea. The glasses also have less of an effect on brightness and colours of the image.
However, passive 3D is not without its disadvantages. The biggest one is that horizontal resolution is halved. This is because both images for the left and right are displayed simultaneously. Half the horizontal lines are used for the left eye and the other half are used for the right eye. This is why active 3D displays are touted as full HD while passive 3D displays are 540p (half of 1080p) or 360p (half of 720p). The second disadvantage is due to the polarization technology which limits the viewing angles of the image, both radially and vertically. The glasses (and therefore viewer) must maintain a level viewing angle with the display or else the vertical and horizontal polarization will not work. Deviation such as rotating the glasses will distort the image and disrupt the 3D picture. This means that the viewer cannot tilt their head and must maintain a straight view of the display. The second part of this limitation affects the vertical viewing angles of the display, with some displays being limited to as narrow a band as plus/minus 5 degrees vertically from the horizontal centre of the image.

These limitations are sure to diminish as passive 3D technology improves. Regular 2D displays with higher than 1080p resolution are already available and this should trickle down into passive 3D displays to address the halved resolution. Viewing angles should also improve as polarization filters become more refined.

Currently, passive 3D TVs are available from manufacturers such as LG, Philips and Toshiba. LG has also released an 3D LCD monitor for computing as well. These 3D displays are comparable in price to active 3D sets but with the advantage of lower-priced glasses. Only LG has a passive 3D projector (model CF3D) but at $10,999 USD, it is approximately 30% more expensive than similar active 3D projectors. It also requires a special silver projection screen to reflect the polarized images. 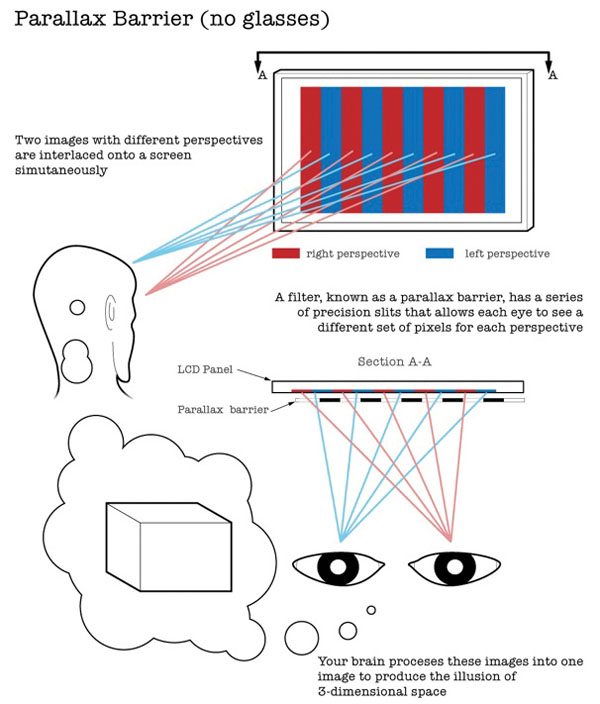 The latest type of 3D technology forgoes the need for glasses altogether. Similar to passive 3D displays, images for both eyes are displayed simultaneously but no polarization is used to separate the images. Instead, these displays use a physical vertical parallax barrier which directs the images to each eye. The barriers physically project two separate images with a slight separation, corresponding to each eye, allowing each eye to receive a unique image and thus creating the 3D effect.

These vertical parallax barriers are similar to the plastic rulers with vertical grooves which display a different image depending on the angle of the ruler but instead of changing the angle of the display, these barriers direct light to each eye.

Glasses-free 3D made its debut recently with the release of the Nintendo 3DS handheld gaming system. It uses a 3.5 inch 800 by 240 pixel screen to display 3D images. Similar to passive 3D, resolution is cut in half due to the simultaneous displaying of two images. In this case, vertical resolution is halved, producing an effective resolution of 400 by 240 pixel for each eye. Parallax barriers are also beginning to appear in dashboard displays in vehicles, allowing the driver to see the navigation and other driving information while allowing the passenger to watch a video or view other information.

Currently, only LG and Vizio have released glasses-free 3D displays in North America while Toshiba has released them in Asia. These are the only three manufacturers creating displays for both types of technology (requiring 3D glasses and glasses-free 3D). There are currently no displays or projectors that combine these technologies.

LG has also released LCD computer monitors which try to deal with the limitation of the projection area by using the built-in webcam to track the user’s eyes to actively adjust the parallax barriers to optimally project the image to the viewer.

Having viewed active displays from Samsung, Sony and Panasonic as well as passive displays from LG, I prefer active 3D displays due to the higher resolution and sharpness. The better viewing angles also allow for different seating and lying positions on the couch. The heavier active shutter glasses do make it more cumbersome and while I’ve never sat through more than a two-hour movie, they do start to feel more present after an extended period of time.

As 3D technology continues to improve and as more content becomes available, consumers will be more inclined to make the switch to 3D-capable HDTVs. The addition of 3D cameras/camcorders will help speed that along. As well, sports and gaming will continue to drive adoption and LG is actively promoting their passive 3D technology by providing it to sports bars and other venues. Watching a soccer, football or hockey game in 3D really does add another aspect to it and the cheap cost of passive glasses allows easy adoption. Even if consumers don’t purchase 3D displays strictly for watching 3D content, manufacturers are often putting the newest and best technologies into these displays, making them the best 2D-capable displays in their lineup (e.g. higher resolution, faster refresh rates). 3D is here to stay and hopefully will continue to make inroads into the consumer marketplace.