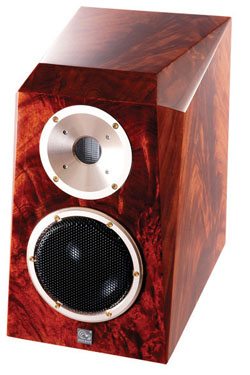 You may have not heard of Volent before but don’t worry, neither have we – not until now. Volent was launched in 2006 in Honk Kong by a group of engineers who have been in the business of designing speakers and drivers for many years. The name Volent comes from the phrase “Voice of Excellence” and now Volent speakers are available in Canada thanks to Canadian distributor Worldwide Wholesales. All Volent speakers are designed and manufactured in Hong Kong.

The Volent Chorale CL-2 speaker under review here represents the company’s most affordable, entry-level bookshelf speaker. My review pair came finished in a rich, high-gloss Mahogany veneer ($2495/pair) but the CL-2 is also available in a high-gloss Black ($2495/pair). The cabinet has a rock solid construction with arrow-cut, triangular surfaces at the top and the sides which give the speaker a distinct look but also assist in eliminating the standing wave effect. In a traditional speaker cabinet the high frequencies radiated by the tweeter can reflect off the corners of the cabinet and arrive at the listening position slightly delayed, hence blurring the treble. The arrow-cut, triangular surfaces of the CL-2 change the angles of the reflected sound so that it doesn’t reach the listener’s ears. The heavy, metal grille covering the driver reminds me a little too much of the PA speakers in my high school but the good news is that it can be removed by unscrewing the six Hex bolts which hold it in place. The tweeter faceplate and the driver basket both have a Champagne gold finish and are secured to the enclosure with gold bolts. I also discovered a number of finishing imperfections around both the tweeter and the woofer which looked like smudges but could not be cleaned. Visually then, out of the box the CL-2 isn’t the most attractive speaker. But its appearance can be improved significantly by removing the driver grille. Personally, I prefer the look of the high-gloss Black finish.

Technically though, the CL-2 should be much more appealing to audio enthusiasts. Its two-way design combines the company’s above mentioned 1.5-inch Twin-Ribbon tweeter (in a side-by-side configuration) with a 6-inch Hextech midrange/bass driver. A sheep had to get a haircut to provide wool for the inside of the speaker cabinet, which is said to maximize the bass performance and open up the soundstage. The 6-inch Hextech driver got its name from the fact that it uses a hexagon shaped voice coil, and is said to achieve a faster transient performance and a more dynamic bass than a traditional 6-inch driver. The back of the cabinet has a large venting port and houses a pair of solid, gold-plated binding posts. The CL-2 has a frequency response rated from 38 Hz all the way up to 50 kHz, thanks to the ribbon tweeter of course. It has an impedance of 6 ohms, sensitivity rated at 87 dB, is crossed-over at 1,900 Hz and has a power handling rated at 150 Watts. The CL-2 is a fairly large speaker which measures 240 mm wide by 388 mm high by 355 mm deep, and tips the scale at just over 30 kg each.

To achieve maximum performance from the CL-2 speakers they need to be set up carefully so that the tweeters are as close to ear level as possible and they should be slightly toed-in toward the listening position. I burnt the speakers in for about 150 hours, playing music in the background.

I began my tests with the CL-2 speakers hooked up to my Fatman iTube 452 integrated tube amplifier and used my trusty Classé Audio CDP-102 CD player as the source.

When listening to classical CDs, such as Vivaldi: The Four Seasons Violin Concertos (Itzhak Perlman, EMI Classics), the CL-2 speakers projected a rich, passionate midrange. The violins played with fluidity and great dynamics. The stereo separation and imaging were superb. While listening to Britten’s Orchestra CD (Michael Stern, Reference Recordings RR-120) the soundstage was expansive in both width and depth, and there was an ample amount of air between the instruments. With each classical track, the CL-2’s very effectively channeled the mood of the music directly to my ears. Slower passages played delicately with passion, while heavier passages came through with adequate punch and excitement. In the high frequencies, the cymbals sparkled and sounded very crisp. The highs contained an incredible amount of musical details, yet I didn’t find them to be harsh or edgy.

When I put on AIR French Band’s “Moon Safari” album, I noticed a slight increase in the details and transparency in the top end, compared to my reference Focal Electra 1008 Be II speakers. The electronic effect in the intro to “La Femme D’argent” which normally plays a little further in the background, was brought more forward and sounded better pronounced. The CL-2’s had the ability to extract some of the delicate details in the high frequencies which many speakers conceal – this was without doubt thanks to the excellent performance of the Twin-Ribbon tweeter. The vocals were crystal clear, without any signs of sibilance or strain.

It should be noted that without a sufficient break-in time, the CL-2’s offer very little in the low frequency department. Even after about 150 hours, the punchy bass line in “La Femme D’argent” had little weight and lacked the articulation that I’m used to. It was only after some 300 hours that the bass finally came to life and the improvement was drastic. Suddenly the bass line which defines this track was present in full force, stretching well into the low octaves and with great articulation. Point to learn here – if you decide to audition the speakers at a store, make sure that they have been properly burnt in.

Partway through my listening session, I replaced my Fatman tube amplifier with the Classé Audio CP-500 preamplifier and CA-2100 amplifier. With this duo in place, the sound may have lost some of its warmth but benefitted from an overall increased detail and the CL-2’s enjoyed every second of it. After playing a few CDs, I decided to spin a few records on my recently purchased Clearaudio Concept turntable. This instantly put the warm character that I adore so much right back into my music.

The first record I listened to was the “The Suburbs” from Canadian indie rockers Arcade Fire. “The Suburbs” is engaging and stimulating from the first track to the very last and so I ended up listening to all sides of the two vinyl set. On ‘Ready To Start’, the CL-2’s perfectly resolved the noisy guitars, synthesizer effects and fuzzy, whiny vocals. No, these various audio layers weren’t all clumped together as you might expect from a lesser speaker. Instead each layer played with its own space, yet the combined layers were assembled together just right when they arrived at my ears. The dynamics, scale and emotion of every track was portrayed very well by the CL-2’s. The bass extension had very good weight and dynamics for a speaker in this price range.

Then I shifted over to the “Let It Be: Naked” album from the Beatles, a “back to the roots” version of the original “Let It Be” stripped of the orchestra, chorus and overdubs by producer Phil Spector. The CL-2’s played this album with all the subtleties of the original live studio sessions. The Twin-Ribbon tweeter once again revealed details in the top end previously unknown to me on this album. The fluidity of the vocals and music had me singing along with the Fab Four in no time.

The audio market is crowded with speakers in the $2500 price range and in my opinion the Volent Chorale CL-2 isn’t the prettiest of these. But where it comes short on looks, it certainly makes up in performance. It offers the finest musical details thanks to its ribbon tweeter, a clean, detailed midrange and a very good bass extension. It is a versatile speaker which performed very well across all music genres, from jazz to classical to rock. If you’re in the market for a speaker in the $2500, the CL-2 is definitely worth a listen.