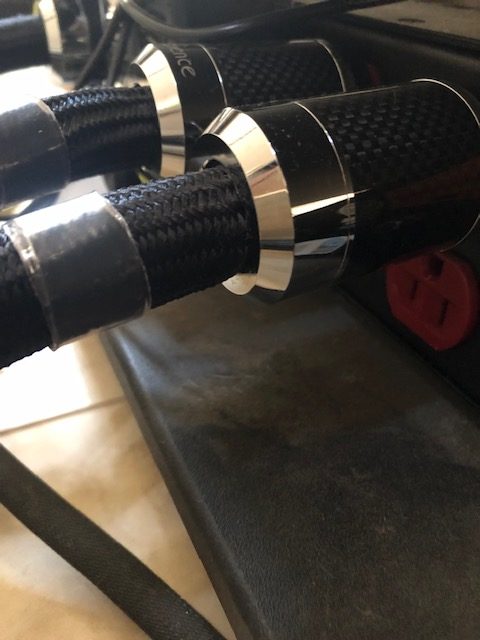 Set Up & Listening
I decided that the best and most interesting method for hearing and testing what sonic changes would occur with the frontRow cords in the system, it was best to introduce them one by one. Based on past experience, high quality power cords have had the biggest impact on power amplifiers in my systems. With that in mind, the first listening sessions with the frontRow powerChords were with one hooked up to the Canadian made Simaudio 870A power amp. It is a high current, high powered solid state design, and it is remarkably dynamic and transparent.

I listened to numerous albums and pieces of music prior to frontRow installation and the same music after installation. I made sure to play both classic and new recordings, music that I would listen to for personal enjoyment regardless of what gear was in the system. No quick swaps were done. The Audience cords were left in for significant periods of time after each incremental installation.

My usual power cords are the Acoustic Zen Tsunami II on the preamp and power amp, and Black Rhodium Fusion on sources. The system is plugged into both the aforementioned Audience aR6 conditioner as well as a Bryston BIT-15 conditioner. To round things out, the wall receptacle is an ultra high end Oyaide, from Japan, and the aR6 features a Neutrik fitted captive Audience power cable.

One of the first albums I listened to during the review was the brand new mono, 24/192 remaster of Albert King’s blues classic, Born Under A Bad Sign. I am normally not a huge fan of mono, but in this case the mono mix beats the dated, stereo mix, which featured extreme panning of each stereo channel. I was taken aback at the impact of the bass and drums, and the grit in King’s vocals, as well as the stinging tone of his lead guitar. The difference with the frontRow in place was more snap to the snare drum and the bass seemed bigger and rounder. The whole album seemed to have more of a “live” feel. There was also a smoothness and delicacy to the treble.

The 1969 self titled album from progressive rock pioneers, Yes, is one of the most stunning debuts in popular music, and it’s still has impressive to this day. The Japanese SACD, from the High Vibration box, is the best digital mastering available, and preserves all of the analog goodness of the original. The first four tracks are a tour de force, with great vocal harmonies, intricate guitar parts, and masterfully syncopated rhythms. This album also offers a very well done cover of the early Beatles classic, “Every Little Thing”. The frontRow cords added dimension to the soundstage, as well as more shimmer to the acoustic guitars and Jon Anderson’s lead vocals, and more pop to Chris Squire’s percussive bass style. The improvement in the presentation with the Audience cables was rather easy to hear. From the very smooth, grain free high frequencies, to the precision of the bass drum.

One of my favorite and yet overlooked albums by Santana, is Welcome, from 1973. It continued Santana’s foray into spirituality, first seen on Caravanserai and Love Devotion Surrender, with John McLaughlin. There was clearly a new direction, which was jazzier, more experimental, and way less geared towards radio friendly hits. The 96 kHz remaster is spectacular in every way. With the frontRow cords in place, the presentation was more dramatic. The percussion and bass lines were more impactful, and the overall rhythmic drive was more cohesive. I had not previously heard such a wide soundstage on this recording.

Shifting gears to the here and now, I am quite taken by the Swedish band Henning. Both their albums Galileo, and Nattan utan dagar, purchased as CD quality downloads, are incredibly sophisticated modern rock, and it seems they are hugely influenced by the legendary Dire Straits. The recordings are clean and clear, with wide open spaces and hypnotic rhythms. There are elegant guitar leads, and lyrics sung in Swedish, which makes it even more mysterious. Listening with and without the Audience cables, it was apparent the frontRow installation provided a more crystalline treble, and a more transparent midrange. If only all modern digital recordings were this good.

Another excellent new album and a very good recording Designer, is the latest from New Zealand based chanteuse Aldous Harding. She very much comes across as a modern Christine McVie, with dreamy keyboards, spacey melodies, and tasteful spare arrangements. The 24 bit download has very nice dimensionality, and the frontRow cords really helped produce a “3D” sound here, with Harding’s beautiful voice solidly out front and center, with perfectly rendered space between the instruments. The overall sense of melancholy was perfectly served by the black backgrounds.

During my musical journey, I recently stumbled upon a new release Kalba by Isaac Birituro & The Rail Abandon. The music is an intoxicating brew of propulsive indigenous Ghanian and moody modern rock. The sonics are impressive, with percussion, xylophone, and ghostly voices creating a kaleidoscope of sound. The 96 kHz download sounds wonderful, and the frontRow cords exposed all the overlapping elements in the mix. The bass lines were more nimble, the soundstage depth was thrilling, and the dynamic range with the Audience cables was enough to impress even jaded listeners. 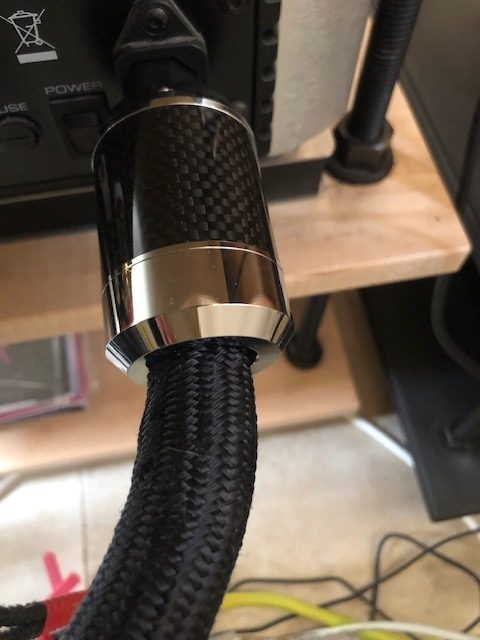 Incremental Improvements
As stated at the beginning of this review, the Audience frontRow powerChords were installed incrementally, first on the power amplifier, then the preamp, then the DAC. The listening impressions above are a combined overview of the performance of these impressive power cables. The biggest improvements were with the power amp, as I had expected. The differences were clear cut and overwhelmingly positive.
With the Audience cables installed on the preamp the improvements were less dramatic, but audible. There was more precision, a weightier foundation, and overall more naturally relaxed presentation. My Bryston DAC seemed to come alive with a powerChord, and the biggest improvement here came in dynamics.

Clearly the Audience frontRow powerChords were lowering the noise floor, and that is the key to all the improvements that power cables can provide. The backgrounds were absolutely dead silent, and mind you, this is in a system well set up with power conditioning, and a high quality receptacle. It is clear that the last six feet of cable feeding the power supplies of high end audio components is critical to overall performance.

Less Noise = More Music
The purpose that well designed aftermarket power cords that are made specifically for use with high end audio components serve is often confusing for some. But in the end, what they bring to the table is not a difficult concept to understand. First, they deliver current to the power supplies in the most efficient manner possible. This should not be discounted. An amplifier requires unimpeded power to deliver realistic dynamics or deep and articulate bass, and while an ordinary, no name bulk power cord will deliver current, it is not designed for audio.
Along with delivering current in the most efficient manner, audiophile grade power cords also help eliminate RFI (Radio Frequency Interference) and EMI (Electro Magnetic Interference) from getting into the power supply and, ultimately affecting sonic performance. EMI and RFI often manifest themselves as subtle high frequency hash, bass notes that hang around a little too long, and an overall, less relaxed sound.
Audience power cords have always addressed these issues, with all their cables, but it is clear that the frontRow powerChord is their best power cable yet. Yes, it is expensive, and clearly one’s system must be commensurate with these cables for them to be considered.

Conclusion
After several months with the Audience frontRow powerChords in my system, they demonstrated exactly what state of the art in power cables can do. Along with the sonic benefits described above, they are exceptionally well made in the U.S.A. If one has a system that is up to par, these cables must be considered when auditioning power cords.