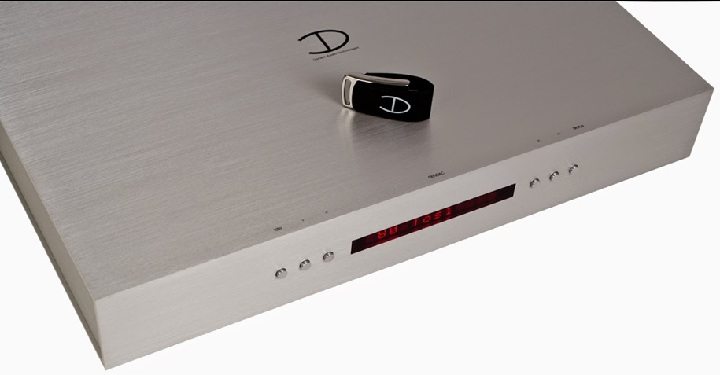 Densen has been designing DACs for other companies since 1994. The new Densen DenDac 50 DAC is Densen’s first full size DAC under their own moniker.

The Densen DenDac 50 uses a analogue Class A preamp stage for volume, very similar to the preamp stage found in the Densen reference preamp B-275. This ensures maximum resolution, even at low volume settings.

The analogue stages are based on Densens famed 6 watt class A amplifier stage, with no negative feed back (neither global or local), which here is obvious used in a version with less than 6 watts output. It contains a relay driven attenuator, which is controlled by a microprocessor, and offer a resolution of 200 steps.

The DenDAC 50 has an internal port, that will allow to mount a small pcb with a digital input, in case there in the future comes some digital input standard which is currently not present on the DenDAC 50. This will also allow the implementation of a soon to be released Densen WiFi board, that will receive digital signals by WiFi and/or the possibility of a future Bluetooth board.

The DenDAC 50 contains a USB input, 2 coax inputs and 2 toslink inputs. The DAC is a new 24 bit type which is mounted under a shielded box, to avoid digital interference on the analogue stages. DenDAC50 has a carefull layout pcb layout in the digital domain, using a 4 layer PCB for additional optimazion of the signalpath, groundplanes and shielding of the signals.

DenDAC 50 also contains 3 analogue preamp inputs. This allows analogue sources as Tuners, TVs, tapedecks etc to be connected to the DenDAC 50. The Tape output can also be used as line output to a headphone amp if so desired. The DenDAC 50 also has 2 headphone outputs. A classic Jack and a miniJack output, allows for all users of headphones to use the DenDAC 50 directly.

Naturally the DAC has preout outputs from the DAC allowing connections to poweramps and other preamps. There is a fixed output, intended for preamps, and a variable output allowing for connection to poweramps. The variable output is naturally using the analogue preamp with the microprocessor controlled attenuator.

The DenDAC 50 makes extensive use of SMT (surface mount technology), a technology which has seen extensive use in the audioindustry the last 5 years, but which Densen has pioneered since 1994. As good audiodesign is not only about using the right components, but also about the implementation and manufacturing process in order to achieve highest quality level, lifetime, and sound quality.

As usual for a Densen product, the powersupply is carefully optimized. DenDAC50 contains 2 custommade toroid transformers, each with no less than 4 power outputs, so a total of 8 transformer outlets. They feed 5 rectifier bridges and 50.000 uF of storage capacity. Further, nothing less then 18 individual regulators feeds the delicate circuits, and allow each circuit to perform perfect, without interference from the others. The Densen design team has focused totally on creating a DAC that not only sets new standards for the price range, but actually plays music in a way, that allows the listener to really dig into the music.

The DenDAC50 uses the best components throughout the design, such as custommade capacitors, Vishay metalfilm resistors, goldplated RCA’s with direct connection to the printed circuit board. And high quality film capacitors.

The new Densen DenDac50 DAC will have a MSRP of 4500 Euro. North American pricing and availability have not yet been announced. Look for more details at: http://densen.dk