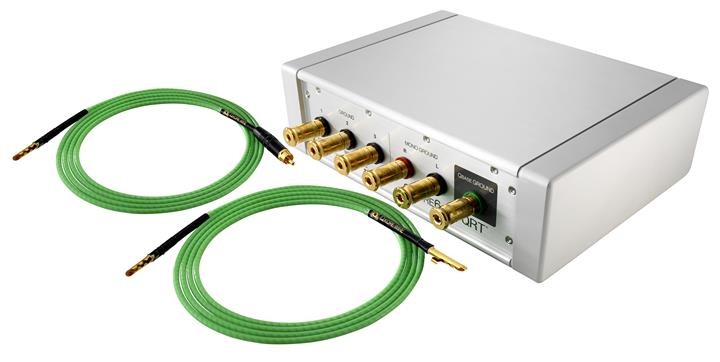 With the QKORE6 and QKORE Wires hooked up and James Blake’s track ‘Limit to Your Love’ playing, I most definitely could hear additional clarity in the piano; there was more definition and an undeniably greater, more palpable sense of the hammer-to-string resonance. Listening to the same without this QRT grounding system connected, the piano keystrokes were less pure, with a comparative blurring or noise around each keystroke. There was no doubt that the brilliance and purity of the piano keys was brought to a noticeably higher level of realism with the QKORE6 in place. As much as this increased clarity, perhaps better described as purity, was revelatory, there was more to what the QKORE6 / QKORE Wires were offering. The piano was not only clearer or purer but possessed greater dimension with the QKORE6 and QKORE Wires in play. This greater dimension rang true with Blake’s vocals, as well. The experience was like getting an upgraded seat in a music hall. A seat where the performance is not only perceived more clearly but with instruments carrying more impact, their physicality coming across in a much more meaningful manner.

I thought it might be interesting to see what the individual effects of the QKORE Wires ground connections were having in my system. I began with testing out the effects on the preamplifier, in my case a Bryston BP173. Unhooking the preamplifier, which was connected to the QKORE6 by way of an XLR QKORE Wire, didn’t result in any significant audible change. Though I still found there was a slight improvement with the preamplifier connected, after repeated A/B comparisons, this was nothing I would describe as noticeable. Remember, I’m only talking about the ‘net’ increase of the added QKORE Wire between the preamplifier and QKORE6, acknowledging that all the other benefits of the QRT system remained unchanged. Perhaps this was a component specific result because it wasn’t consistent with what I found next.

I moved to the amplifier connection next. Disconnecting the Bryston 4B3 amplifier and then reconnecting revealed that the QKORE Wire connection was significantly more pronounced with the amplifier than with the preamplifier. What were the results? The direct connection of the amplifier improved clarity and precision in the performance. This connection alone provided a noticeable improvement in transparency.

Yet, along with this, I could also perceive greater dynamic contrast and noticeably improved image separation. Music with the amplifier connected directly to the QKORE6 via the QKORE Wires was overall more embodied and visceral. Yes, this was on an incremental scale but noticeable, nonetheless.

With the level of results clearly different between the preamplifier and amplifier connected to the QKORE6, I went on to experiment with the connection to the Simaudio 280D DAC / streamer. Disconnecting the DAC from the QKORE6 resulted in the most significant drop in the performance enhancements of the QRT system. Overall yes, the positive effects of the QRT system remained but unhooking the QKORE6 / QKORE Wires from the DAC / streamer resulted in a pronounced reduction in the degree of performance benefits. In my system the QKORE6 / QKORE Wire enhancements were greatest with the DAC / streamer, followed by the amplifier and finally with the preamplifier. Are some types of components more prone to the negative effects of poor grounding or EFI / RFI? Likely so. This too would apply to different component engineering designs, some of them having greater susceptibility to EFI / RFI degradation and as a result, with greater potential for improvement with the QKORE6 / QKORE Wire products. In your system, you might reach a different conclusion but one thing I’m confident of is that if your goal is achieving the full potential of your system, auditioning these QRT products would be well worth your time.

But I wasn’t finished just yet: one more connection remained to be tested. I noted the performance with the track “Outlands” from Daft Punk’s Tron: Legacy album. Leaving the QKORE Wires between my components and the QKORE6 and just disconnecting and reconnecting the single QKORE Wire between the QKORE6 and QB8 I got down to business. With the connection in place the violins were clearer with more presence. The instruments were conveyed in a more three-dimensional manner, their placement more stable, all lending to superb sonic holography. Also, noteworthy, was an enrichment in instrument tone; more color and apparent complexity of string notes with natural sweetness and realism in timbre. The air around instruments was also more apparent, giving clearer insight into the recording space. The timpani percussion on the track had stronger dynamics with the QKORE Wires / QKORE6 and there was greater focus and a clearer impression of the instrument resonance. Brass tones were more brilliant with their metallic nature more authentically rendered. Overall, there was no doubt that the single connection between the QKORE6 and QB8 provided overall increased insight into the music and the recording.

While I began this review with an open mind, I can’t deny that I was somewhat skeptical about the level of benefit to be obtained in my system. After all, I didn’t have what I thought to be a compromised power supply connection. Yet even with dedicated circuits, the Nordost QRT QKORE6 and QKORE Wires provided enhanced benefits on a scale I would be hard-pressed to live without; benefits that could not be described as anything-less-than significant. As impressive as these results with QRT products have been, I’ve not yet given you the last word. For that you’ll have to wait for Part 3 of this Nordost QRT products trilogy, where I’ll explore the QRT Qv2 (QVIBE) and Qk1 (QKOIL). Stay tuned.

For more info about Nordost products, check out www.nordost.com