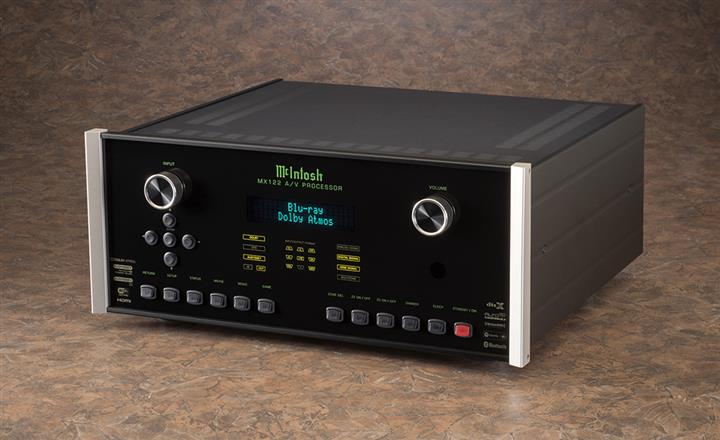 McIntosh has just introduced three new audio products at CES 2016: the MX122 A/V Processor, MB50 Streaming Audio Player and RS100 Wireless Loudspeaker. Each product combines the best-in-class audio performance of the legendary McIntosh Reference System with the latest in technological development. Highlights of each new product are outlined below.

MX122 A/V Processor
The MX122 A/V Processor can serve as the brain center for an advanced home theater system for years to come. It features many of the latest breakthroughs in surround sound and object-based 3D audio such as Dolby Atmos, and will be upgradeable to support DTS:X and Auro-3D. Besides 3D audio, existing formats like Dolby TrueHD, DTS-HD Master Audio and others are still supported. Regardless the format, all audio will be processed to legendary McIntosh sound quality and performance standards. The MX122 is also fully compatible with modern 4K Ultra HD video sources and can upscale lower resolutions to 4K Ultra HD for the best possible picture quality. A wide assortment of inputs and outputs are included to connect current and future entertainment sources. All HDMI inputs and outputs are HDCP 2.2 and support High Dynamic Range (HDR), 4K Ultra HD at 50/60Hz, 4:4:4 color, Rec. 2020 and 3D video pass-through. The enjoyment the MX122 delivers does not have to be confined to just one room as the MX122 can send select audio and/or video to 2 additional zones within in the house. Users can connect to their online digital music with either the wired or wireless network connections. DSD64 files can be played from flash drives or over the network. Bluetooth and AirPlay connectivity allows for easy streaming from mobile devices. Interfaces to popular streaming services including Pandora, SiriusXM and Spotify are included while vTuner connects to 1,000s of internet radio stations. Audyssey MultEQ XT32 will calibrate the MX122 to each home theater’s unique acoustical properties.

MB50 Streaming Audio Player
Transform a home audio system into a wireless audio system with the MB50 Streaming Audio Player. The MB50 features DTS Play-Fi technology to give the freedom and flexibility to wirelessly play music at home over an existing Wi-Fi network. While utilizing DTS Play-Fi streaming capabilities, the MB50 delivers the legendary McIntosh sound quality and performance found in the company’s other home audio products. Simply connect the MB50 to a Wi-Fi network and audio system via the analog or digital outputs and then stream music to it from the Apple or Android mobile app or Windows desktop app. Besides accessing a personal music library on a mobile device, the apps have built-in support for many leading online streaming services including Deezer, KKBox, Pandora, QQMusic, Rhapsody, SiriusXM, Songza, Spotify and TIDAL. If there’s more than one audio system to stream to, just add an MB50 to each and then stream the same music to all systems. Or if there are multiple mobile devices with the app, different music can simultaneously be streamed to each system. Analog and digital inputs allow for connecting audio components such as CD players, letting the MB50 to act as a mini-preamp. 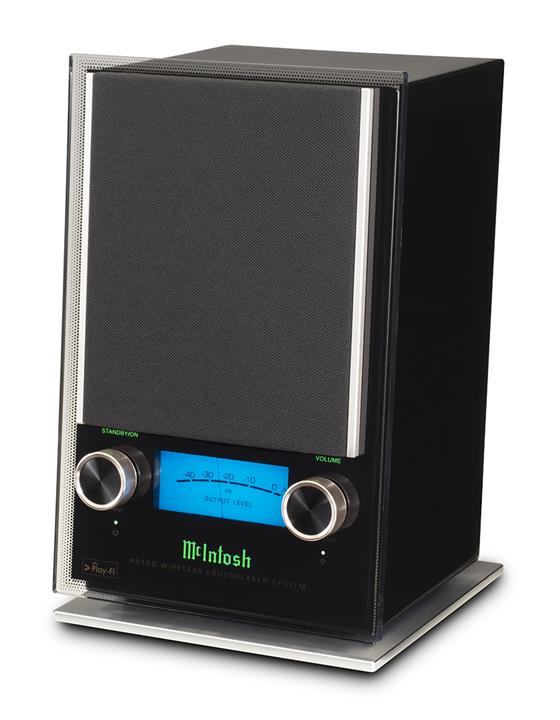 RS100 Wireless Loudspeaker
The RS100 wireless speaker allows streaming music capabilities to be added to any room. It features DTS Play-Fi technology that gives the freedom and flexibility to wirelessly play the music on mobile devices over an existing Wi-Fi network. Simply connect it to a Wi-Fi network, install the free Play-Fi Apple or Android mobile app or Windows desktop app and then begin streaming. A single RS100 is all that is needed to start building a wireless speaker system; more can be added over time to expand the system. Up to 16 speakers can be connected to a single Wi-Fi network – enough for stereo playback in 8 separate rooms. With the Play-Fi app installed on multiple devices, each device can stream different music to each room, giving all family members or guests control over what they want to hear in their room. Besides accessing a personal music library, the apps have built-in support for many leading online streaming services including Deezer, KKBox, Pandora, QQMusic, Rhapsody, SiriusXM, Songza, Spotify and TIDAL. Not limited to just streaming, the RS100 is flexible thanks to its auxiliary input which allows it to be used in non-streaming setups; it can quickly be switched back and forth between the two inputs to accommodate listening preferences. A subwoofer output is also included.