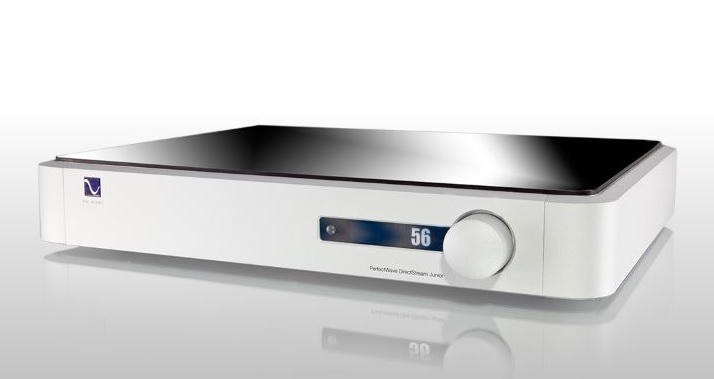 The advanced FPGA and pure DSD technology employed in DirectStream was expensive – the most most expensive DAC PS Audio had ever made. PerfectWave took performance up further for an additional 41%. Alas, not all could afford DirectStream, not even all loyal PS Audio customers, so PS Audio began to work on a lower cost “Junior” model.

The product directive asked for similar architecture to DirectStream in a PerfectWave-like chassis, with the network Bridge built in and performance not less than 85% of the original. A tall order by any measure.

Retooling the chassis, replacing the touch screen with a less expensive OLED display and manual volume control was relatively straightforward work by PS Engineering. The real challenge was getting 85% of the performance at a 41% reduced price. This took over two years and the result was the DirectStream Junior.

The new DirectStream Junior has a near identical character of sound to the existing and higher priced DirectStream. Full, rich, warm, never electronic. Both units share the remarkable ability of helping Red Book CDs sound close to high resolution audio, and uncover a wealth of music long buried in home libraries.

Where the two deviate is in terms of spatial accuracy, transparency, separation of instruments, soundstage width and treble accuracy. The best measure of these differences can be expressed in percentage. DirectStream Junior provides 85% of DirectStream’s performance in the aforementioned areas. The differences are not glaring, and auditioned in a vacuum, DirectStream Junior will impress listeners as one of the finest audible experiences they have yet had.

DirectStream Junior is built in the United States by hand. Local manufacturers use sophisticated PCB building machines to populate and test the multi-layer board used in DirectStream Junior. It takes a number of companies and a lot of skill and equipment to build something this elegant and affordable. From high tech x-ray technology to place the FPGA IC on the board, to automated pick and place machines adding parts in just the right spots, DirectStream Junior’s circuitry is built, tested and delivered to our Boulder Colorado facility by handpicked US vendors. The chassis of DirectStream is a metal sculpture that is by far the best we’ve ever built. A combination of aluminum and steel, DirectStream weighs in at 20 pounds of elegance and beauty. There is a measure of pride of workmanship that goes into every one of these PerfectWave products and it shows from the moment you open the unit up and plug it in.

North American pricing and availability are expected to be announced shortly. Look for more details on this and other PS Audio products at: http://www.psaudio.com.