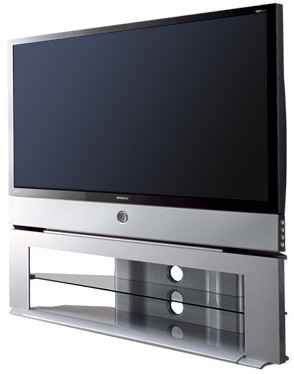 Although plasma TVs are getting a lot of attention these days, recent advancements in DLP television technology offer a great alternative at a fraction of the cost. In fact, some DLP TVs can produce a higher quality picture than Plasma TVs.

DLP (Digital Light Processing) TVs utilize millions of microscopic mirrors that reflect light toward or away from the screen to create each of the image’s pixels (see “Experiencing the DLP Difference” on page 31 of this issue for more info). The image is then sent through a projection lens that resizes it to fit on the screen, without image degradation.

DLP’s biggest drawback has always been its’ inability to create deep blacks, in part because so much light bounces around inside the engine. The HD2 chip, however, incorporates a number of advancements that help absorb some of those internal reflections and vastly improves the DLP’s black level. The HLN617W produces significantly deeper blacks compared to previous models.

The Samsung’s image has a good contrast because it’s incredibly bright but also because the blacks are reasonably dark. This made it quite comfortable to watch in a dark room without the image looking too washed out, although the image did look its’ best with a couple of lights on.

The set has excellent black-level retention, which means that dark images don’t get lighter or darker as the rest of the picture changes, and all of the inputs utilize an excellent colour decoder. The set doesn’t offer scan-velocity modulation, of course, because there aren’t any scan lines to modulate.

But contrast and brightness isn’t everything, and testing the HLN617W with different kinds of video sources produced stunning quality pictures, with extreme detailing. DLP offers some inherent improvements over CRT-based displays, and this Samsung is no exception – for one, the image is extremely sharp. Both DVD and HDTV signals were highly detailed, and Cable was not far off. Samsung definitely utilizes the HD2 chip’s full resolution, and the display’s convergence, geometry, and corner-to-corner focus are nearly perfect. Regular TV is a little grainy but still quite vivid, and the deinterlacer and scaler do an excellent job of converting low-resolution NTSC sources to fit the display’s default resolution, which is no easy feat.

The picture is also very clear and distinct, and these traits combine for a thoroughly enjoyable viewing. You could actually see the detail of each leaf in the background of Apocalypse Now, and not only were the car chases in Fast and the Furious making me wish I had an air bag for my chair, but when paused, you could almost make out the faces in the crowds. The fight scenes in Lord of the Rings and Crouching Tiger, Hidden Dragon were incredibly vivid and realistic looking. The TV produced a high resolution image that was amazingly sharp and detailed, and the image quality was better than on many plasma TVs.

The only anomaly I could find was a slight contouring effect – a snowy look – on some older VHS tapes, but it was completely absent in high definition sources. The HLN617W’s screen is so large and accurate that it does reveal some flaws in lacklustre video sources, which is a common problem with large TVs.

There was a slight problem with the colour saturation, but tweaking the factory settings will give you amazing colour fidelity, producing an image that is almost life-like.

The sound was better than expected from the 30 watt, four-speaker system. It might even perform adequately as a centre channel for a 5-channel surround sound system.

Also, unlike other projection and plasma TVs, there is no risk of a burn in, which is what happens when a constant picture or item is displayed on the screen for an extended period of time.

Hooking up a PC to the Samsung was a breeze by using the RGB port in the back. It makes a great deal of sense to connect a computer to this display, given its’ fixed 1,280 x 720 resolution and its’ invulnerability to image burn-in.

Of course, the set has all of the basic features one would expect from a TV of this size, including enough inputs to accommodate an extensive home theatre set-up. Connections on the left and rear panels offer basic audio, composite video, and S-video for your gaming console, VCR, and other standard components. Of the three component inputs, one is dedicated to interlaced or progressive DVD (480-line) signals, while the other two component inputs accept 480 pixel, 720 pixel, or 1080 interlaced DTV signals. Samsung also offers both a DVI input with HDCP and a 15-pin RGB connector.

The HLN617W’s on-screen menu is nicely displayed and easy to manage, although there’s room for improvement – namely, the fact that most functions require navigating through several menus to access. The display has several preset picture modes, but it can also remember custom settings for each source. The onboard menus are feature-rich, and infinite tweaking allows you to achieve exactly the picture you want. The remote could use a few more buttons (or commands) that are commonly used but instead have to be accessed through the menu.

The HLN617W has some great features and outstanding performance characteristics, along with a truly amazing picture quality. And at about half the price of the same sized plasma TVs, it is definitely worth considering.