The History and Future of Music Delivery 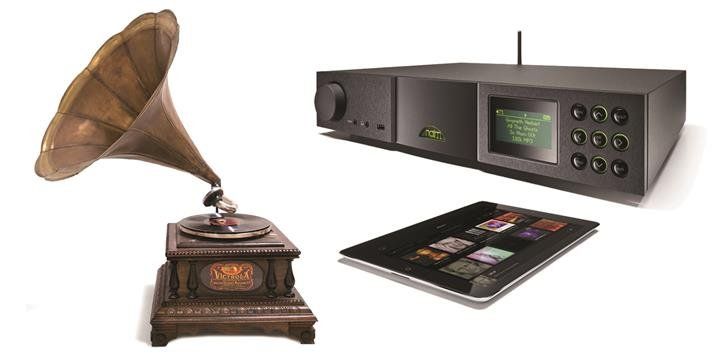 If you happened to live just a few hundred years ago, the only way you could enjoy music was to either sing or play an instrument by yourself or with others, attend a live performance or if you were wealthy enough, you could have enjoyed the privilege of musicians perform at your home or venue of choice. In fact, for the longest time, the only way to pass on music from one generation to the next was to teach it on a first hand basis. The practice of writing down music on sheets with notations that were created and universally agreed upon was a huge breakthrough that allowed music to be preserved for posterity. We have come a long way since then. The past century has seen not only dramatic changes in the way music is stored and preserved but also the way it is delivered to consumers. It has also seen the fortunes of recording artists rise exponentially only to ebb quite significantly over the past few decades.

Music can trace its genesis to the time when humans beat rhythmically on logs and other easily available objects and in time this was complemented with strings pulled tightly so that they could produce tones when strum on. I am guessing that the first vocals were crude and rough with vocal chords stretched to their limits when singing for large audiences, because of the total lack of any form of physical or electronic amplification, save for the cupping of hands around the singer’s mouth to help the voice travel further.

One of the earliest known sound recording devices was the PhonoAutograph that was developed in 1857 by Edouard-Leon Scott de Martinville who was a French printer residing in Paris. It constituted of a mechanical facsimile of the human ear that collected sound through a horn that was attached to a membrane which vibrated a stylus which in turn then etched an image on a soot coated cylinder that was cranked by hand. The problem with this device is that it managed to only record a visual representation of sound and there was no way to play back what was recorded.
Two decades later, in 1877 Thomas Alva Edison unveiled his phonograph that consisted of a recording substrate of tinfoil (later wax), which was capable of not just recording but also of playback. This device was regarded as state-of-the-art in the world of sound recording and reproduction util a decade later in 1888, Emil Berliner developed the shellac based disc and the Gramophone dedicated player. This allowed the mass-production of recordings and playback machines. The discs were popularly known as 78s, which referred to revolutions per minute that the disc spun at during playback.

The 1920s saw the emergence of radio, electronic audio recording and motion pictures. The great American depression that followed put a damper on development due to lack of funds and during this time, the cash starved populace derived their information and entertainment through free radio transmissions.

As America clawed its way out of the depression, progress in music delivery resumed and resulted in the introduction of the jukebox in the late 1930s which caught on like wildfire especially amongst the teenagers who bought millions of records of big band swing from artists like Benny Goodman and Glenn Miller. In the 1940s, this gradually gave way to popular vocalists including Frank Sinatra and Doris Day. Then came World War II, which caused shellac to be in short supply because of its war-related uses and so the patriotic trend was to stop using this material so as to help the war effort.

The subsequent development of the single song per side ‘45s’ by RCA, started a marketing war between it and the ‘78s’ that was offered by CBS, because you needed different players to play each format. This was resolved when both RCA and CBS reconciled to manufacturing multi-speed players that would handle both formats. This provided the impetus for the mass production of records in both formats. In the 1940s, Columbia Records introduced the 33.1/3 RPM long play (LP) record which was considered a huge breakthrough as it offered around 20 minutes of play time on each side.

At the same time as the debut of the LP, we also saw the introduction of the magnetic tape recording system. The genesis of this system was experimentation done in Germany in the 1920s, which laid the groundwork for the 1930s unveiling of the magnetophone, which recorded and played back on magnetic tape. Initially these were very low fidelity and used mainly to record voices and so were regarded as primarily dictation devices. This changed after BASF of Germany developed magnetic tape technology that was capable of recording and reproducing sound that approached the frequency range of records. The first American company to get into production of high quality magnetic tape was Minnesota Mining and Manufacturing (3M) and this was complemented by the designing and manufacturing of professional tape recorders by Ampex.

Records continued to dominate the sound recording sphere until in 1948, Bing Crosby declared that he was dissatisfied with conventional recording technics and so he began recording on the 3M/Ampex magnetic tape system. This gave it a real shot in the arm as it prompted consumers to seriously consider magnetic tape as a viable alternative to the vinyl record system. Professional studios started adopting the reel-to-reel magnetic tape system for their multi-track audio recording requirements.

The vinyl record sector fought back by introducing better quality records and that is what sparked the ‘high-fidelity’ era, which in turn saw the emergence of audiophiles at the consumer level. Audiophiles began looking for ways to optimize the greater fidelity of the better vinyl records and so they started demanding better reproduction equipment which in turn motivated manufacturers to offer better stand alone amplifiers, loudspeakers that had their own independent enclosures and more sensitive stylus/cartridge combos.

LPs gradually took over from ‘45s’ and became the dominant medium at the consumer level until Philips introduced their compact cassette system in 1963. This system was created in response to calls from industry executives for a magnetic tape system that would eliminate the dreary task of manually threading the tape through the playback machine. At first, the compact cassette system was regarded as a low fidelity medium, which posed no threat to the vinyl record system. However better magnetic tape formulations like chrome and metal were introduced which caught the attention of many audiophiles who either switched to tape or added it to their existing vinyl playback system.

Just a few years after the debut of the compact cassette, the eight-track system was introduced. As compact cassettes continued to improve, it was regarded as the better alternative and so it compelled the eight-track system to begin its ignominious journey to the scrap heap of obsolesce. This resulted in a sales boom for blank and pre-recorded compact audio cassettes and when Ray Dolby introduced his noise reduction system in 1969 which significantly reduced the irritating hiss of magnetic tape, it got another shot in the arm which helped it propel past the dominant vinyl record system.

The compact cassette system got another huge boost in popularity when in 1979, Akio Morita, the co-founder of Sony created a veritable tsunami with the introduction of the Walkman. This allowed consumers to enjoy their music on the go, which opened a whole new market for the medium and helped it put even more daylight between it and the vinyl record system. The cassette enjoyed unfettered dominance in the consumer audio sphere until Sony and Philips shook up the industry once again with the introduction of the compact disc, which made its debut with great fanfare and with the promise of ‘perfect sound forever’.

Although the first compact disc players delivered sound that was harsh and strident, the only ones who were very vocal about it seemed to be the die hard vinyl record holdouts who had loyally stuck by vinyl through thick and think while maintain that it is the only consumer level audio system that delivered true high fidelity. They insisted that the CD system was too sterile and analytical to be classified as hi-fi. Although this was a cogent argument, it was totally crushed by the CD juggernaut, which grew in popularity by leaps and bounds to totally dominate the market.