Power Distribution:
Having experienced the improvements wrought by introducing the Heimdall 2 power cables, I was ready to add the Nordost QBASE QB8 power distribution unit.  The QB8 is impressively built with a thick extruded aluminum enclosure akin to the faceplate of a hi-end component.  It is designed to provide a straight-line AC distribution path via Nordost’s proprietary star-earthed topology, which is meant to ensure a clean ground.  No filtering is applied so that the lowest AC-supply impedance can be achieved.  One of the sockets is marked “Primary Earth” and routes the signal ground directly to the centre of the star and the clean earth terminal.  The enclosure, its metal and internal PCB, constitutes a single tuned component; structurally sound and resistant to mechanical vibration.  The QBASE is available with four (QB4) or eight (QB8) 15A U.S. /European outlets, while a UK version has six 13A outlets.

To be honest, I expected the QB8 to be a non-event given the dedicated circuit and the positive effects already realized with the power cables – guess what?  I was wrong.  With the QBASE QB8 accepting all the system power cords, I connected it to the wall outlet via the longest of the Heimdall 2 power cords – which is what Nordost recommends.  What was the result?  A noteworthy increase in resolution, greater focus, increased speed and additional delicacy but wait, there was more.  Listening to the track “Just A Little Lovin’” now revealed more of the recording space, most evident in the clarity and degree of the echo around Shelby Lynne’s voice.  The soundstage wrapped around me in a holographic manner pushing out to the left and right and engulfing me in the mix.  Along with this was a greater sense of placement and presence, Shelby now sounded a little larger with a very soft and natural silhouette.  She was placed a little higher within the soundstage – giving me the sense that was a little closer.  The natural sibilance of her signing was silky smooth, drawing no attention.  Great speed was evident in the rim shots, which clearly had more snap and greater dynamics.  And in the bass frequencies, I could hear some additional articulation.  The QB8 seemed to take all that the power cords had done and squeeze out more. 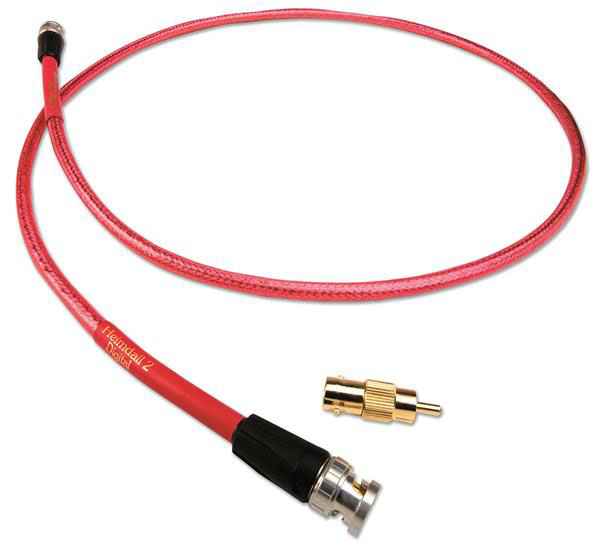 I inserted the 1.5m Heimdall 2 Digital interconnect between my Squeezebox Touch player and ADL Esprit DAC.  Replacing my DH Labs cable with the Heimdall 2 resulted in additional warmth and smoothness.  The treble no longer seemed highlighted, while losing nothing in extension and detail.  The flow of the music was enhanced, providing more genuineness.  Shelby’s voice too gained a share of this warmth and smoothness but also sounded more dimensional, more embodied.  I was also able to perceive more texture and harmonic rightness in the brassy sound of the hi-hat and cymbals and their decay was now further drawn-out.  Overall, the presentation was more relaxed, largely due to an absence of hardness, exaggerated sibilance or highlighting.  In fact, I’ve heard less of an overall increase in performance when I’ve tried DAC’s of twice the price of the ADL Esprit in my system. 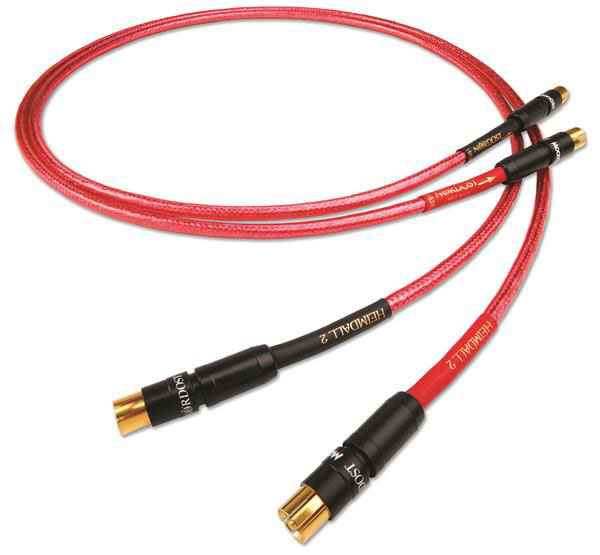 Analog Interconnects:
The Heimdall 2 analog interconnects incorporate the standard Norse 2 features and have the following specifications: 4 x 24 AWG, capacitance of 25pF/ft/ch, impendence of 0.06μH/ft/ch, and propagation delay of 85% the speed of light.  Terminations are Neutrik XLR, Din or Nordost’s own proprietary MonnGlo RCA connectors, which I found to be sturdy and secure.

I first introduced the analog interconnects between the sources and the preamplifier, leaving the Kimber Hero RCA cable in place between the preamplifier and amplifier.  The first thing I noticed was a deeper soundstage – there was added clarity but also a greater sense of ease.  The hi-hat now took on a very life-like presence with added detail and now Shelby’s voice was entrancingly real – more resolved and more focused.  Bass guitar was more extended with another level of tightness and agility that brought across its texture in a new manner – now, not only was the vibration of the strings easily audible at the pluck but lucidly throughout the entire note, pluck to pluck.  I found myself thinking – this is no longer hearing, this is feeling the music!  Another surprise was the effect this latest change had on my awareness of my own quadral Aurum Montan VIII loudspeakers, within my room.  Now, with the analog interconnects in place, they had become imperceptible but so had the presence of my own room.  This is not to say that I didn’t have great soundstaging before but now, in comparison, it was on another level.  Next, I added the Nordost XLR analog interconnects between the Simaudio preamp and my Bryston amplifier.  As a result, there was an added delicacy and clarity to the treble, greater bass control in the lowest regions and a heighted sense of overall liquidity and integration across the spectrum.   I did compare these to my resident Kimber Hero interconnects.  On the track “Sexual Healing” from the album 4 by Fourplay, there was an appreciably greater soundstage with the Heimdall 2.  The synthesized effects had greater buoyancy and bell chimes were more extended, crisp and delicate.  Along with this, voices were more effortlessly delivered and clearer.  The cymbals were no longer fizzy, having better delineation between strikes, confirming the Heimdall 2’s speed proficiency and absence of overhang.  Bass guitar rendering gained improvement, sounding tighter and more extended in the low frequencies, while also more articulate and tuneful. 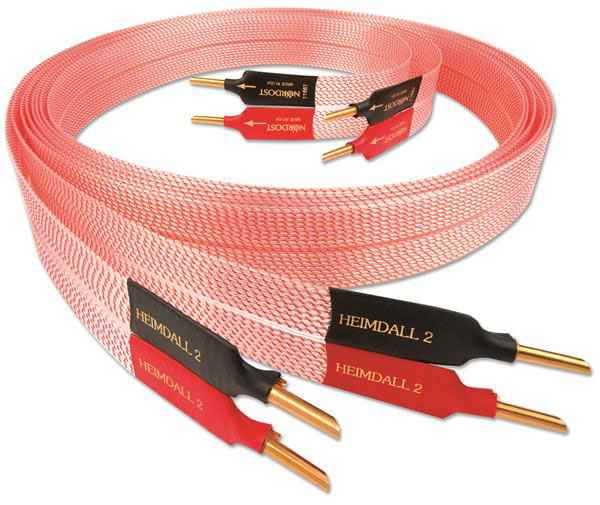 Loudspeaker Cables:
The Heimdall 2 loudspeaker cables have a unique appearance – flat and ribbon like, with an iridescent quality that gives them delicacy and style.  They are very light and also very flexible and can be fitted with either Nordost’s own banana plugs or spades.  The set I had sported bananas, which I found to fit extremely snugly into both my speakers and amplifier posts – leaving me with no concerns about them slipping out.  As with all the Heimdall 2 cables, the standard Norse 2 features apply with the following specifications: 18 x 22 AWG silver-plated solid-core OFC, capacitance of 9.8pF/ft, inductance of 0.14uH/ft, propagation of 96% the speed of light.

Completing the Nordost Heimdall 2 loom by adding in the loudspeaker cables provided a result much like you get from polishing a car, once it has been washed and dried.  The speaker cables seemed to just increase the perceived benefits of everything else down the chain, providing a sense of completeness.  There was a sense of locked-in focus accompanied with added musical ease, flow and naturalness.  The soundstage seemed to drop its defining perimeter – as though any small remnant of noise limiting its dimensions had vanished into the ether.  Dynamics now were freer flowing – effortless, as it were, and the sound gained a fuller and richer composure, with added bass weight.  Here with another added level of resolution came an absence of etch or gnash.  The overall benefits of the loudspeaker cables seemed to be holistic, maintaining if not bettering every quality that its sister cables had brought to the stage.

Full Loom:
When listening to the album “4” by Fourplay and specifically the track “Swamp Jazz”, I was enthralled by the amazing timing and instrument separation.  The various instruments were played with perfect rhythm and clarity, allowing easy attention to be given to each, in turn.  The speed of the Heimdall 2 loom was clearly apparent on the drum and cymbal strikes, as well as with the quick piano keys and strings – crisp, clear, yet always maintaining their finesse, with a smooth and naturally warm character.  Bass depth was well extended and tight down into the lowest region.  The Heimdall 2 had me convinced here of its masterful ability to bring together complexity & nuance with vigor & musicality.

Moving to the title track of Ray La Montagne’s album, “God Willin’ & The Creek Don’t Rise”, the opening guitar had remarkable texture and body resonance.  The drums were produced with amazing height and size, beckoning me to tilt my head upward when giving attention to their placement within the grand soundstage.  These drums also had wonderful dynamic punch and solid weight lending to my exhilaration.  Ray’s raspy voice came through with a lifelike presence.  Again here, both my system and the walls of my room fell away and I was left only perceiving the performance.

With Miles Davis’ Sketches of Spain and the track “Concierto De Aranjuez (Adagio)” I was smitten by the speed and the dynamic swings of the instruments within the orchestra.  The castanets and percussion had an incredibly in-room feel and at times I found myself jerking in response to the quick movements.  The sound of the brass instruments was lucidly rendered, with their natural bite intact – clear, sharp but never edgy or harsh.  Think of a trumpet playing close quarters – there it was, think of shakers and castanets close by – there they were.  Intricacies of the soundstage and venue were laid bare in a most eloquent manner and I was drawn-in closer to re-living the live experience than I’ve ever experienced in my room before. 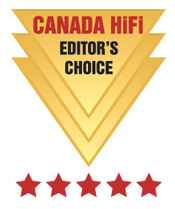 I think I’ve said enough but if my enthusiasm for the Heimdall 2 is not yet evident then I apologize for my own inadequacy in telling their story.  Just take my word for it, I’m awestruck!  In all respects, from transparency, tonality, low noise, detail, imagery, focus, coherency, timing and musical engagement, I’ve experienced no better to date.  I can’t say the Heimdall 2 is inexpensive (very few great things are) but what I can say is that Nordost Heimdall 2 is marvelous, deliciously so.  Going back to my original question – what does the Old Norse story of Heimdall have to do with these cables, other than the name?  All I can guess is that Nordost intends to bring us a little closer to heaven, if not the gods with Heimdall 2, and I think they’ve succeeded.

For more info about Nordost, please check out www.nordost.com