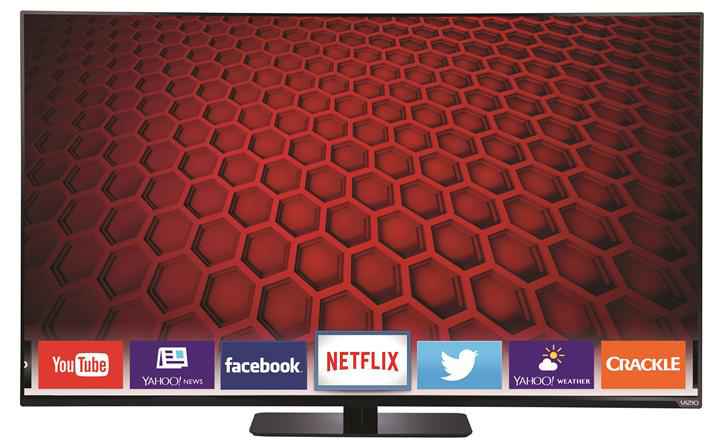 VIZIO, a US company headquartered in Irvine, CA, made its splash into the Canadian market in September 2014. Founded in 2002, the company sought to deliver the best picture performance for the best price. Consumers appear to agree. With over 51 million products sold at prices that seem too good to be true, and its 100 percent North American-based technical support, it’s no mystery that VIZIO has caught traction in the television market. This review focuses on VIZIO’s entry-level 60-inch E600i-B3 LED-Full-Array backlit television that offers a 1080p resolution. Allow me to prevent any misconceptions about this television before you read any further; even though the E-series is VIZIO’s entry-level product, it certainly doesn’t perform like one. If you are a value seeker, a first time buyer, or a casual viewer open to new technology with an easy to use interface, this 60-inch E600i-B3 priced at only $949 demands a closer look.

The TV is modest in appearance and I enjoy it that way. The black 10mm screen bezel combines both matte and glossy finishes. There is no illuminated logo on the frame and no fancy base that would make the TV difficult to prop on a stand. The side profile is about 6.5cm and the whole package is only 52lbs with the stand.

Keeping true to simplicity, VIZIO labels its inputs for novices as good, better, best. Three HDMI inputs, a shared component/composite input, an OTA RF input (with TOSlink and analogue audio output), USB and Ethernet connections are tucked well enough away from the sides of the panel to prevent stiff cables from being visible in wall-mount installations. You can choose to connect from the side or underneath depending on your install. The power/input button is located behind the bottom left of the bezel. The remote control is one of simplest I’ve used in years. I can’t think of a remote that is easier to navigate than this one. The menu layout is straightforward and if you need details on any particular item, you can read the simple to use on-screen manual. The TV comes with a one-year parts and labour warranty and a lifetime of North American-based online and telephone support.

The full-array LED backlighting is the most important picture quality feature available in all VIZIO E-series TVs from 28” to 70 inches, with Smart Dimming in those from 39” to 70”. This 60-inch model has 16 evenly spaced LED zones behind the LCD panel that lighten and dim depending on the picture content. The advantage for the viewer is superior picture quality when compared to edge-lit displays because of evenly lit images across the screen (uniformity) rather than scattered dim spots. In a race to the bottom for the best black levels on a TV, local dimming also offers better black level capability compared to edge-lit competitors. This 60-inch has 16 zones and the more zones the better. With the Active LED feature turned on, one side of the TV could be playing a bright image with the LEDs on while the other side of the TV can have the LEDs dimmed to darken the image in that zone. This effectively increases contrast ratio and VIZIO claims a 5,000,000:1 dynamic contrast thanks to this technology.

To reduce motion blur from the LCD panel (this does not include native motion blur inherent in our film and TV content), the TV has a 120Hz refresh rate that’s accomplished by synchronizing the video processing and backlighting, ensuring that pixels aren’t lit longer than the content demands. LCD blur is a result of the LCD not being able to change its orientation and transmission rapidly enough as the next frame comes in, so faster refresh rates and processing has been a solution to this problem.

VIZIO also includes multiple picture memory presets and many custom image settings that can be renamed to your preference. In addition to the Standard and Vivid modes, there is also a Game mode to reduce input latency by bypassing most video processing for gamers who need the fastest response possible. Two calibrated modes for a light room and a dark room are also included in the menu, but out of the box they require proper calibration to get best results for your specific viewing environment. Any adjustment in any of the image modes automatically becomes a new custom picture setting. VIZIO has put attention to detail for control of image quality. I have never seen an entry level TV offering multipoint grayscale and full CMS adjustment capability and the ability to rename a picture memory. Since 3D has lost its appeal over the years, the company decided to focus on the best 2D performance and pass on offering 3D.

Apps can be launched with a newly designed app launcher from the center V-button on the remote. A single press of this button displays a small bar at the bottom of the screen (overlaying the currently playing picture) and allows the user to scroll through seven apps of choice. Pressing the V-button twice brings up a full screen of apps where users can add, subtract, and move apps around to their liking. This E-series television can also be paired with a tablet or phone using the DIAL (Discovery And Launch) protocol, allowing you to search for YouTube and Netflix content using your mobile device and watch the content on the television screen.  This is a very handy feature that makes typing text exponentially easier compared to using the TV remote.  Of course you’ll need to make sure both your TV and mobile device are connected to your Wi-Fi network, to use this functionality. Overall, I found this TV’s smart features very straightforward to navigate and easy to use.

I only report on image quality after calibration since that’s the best way to judge a television’s performance. Measurements were taken using Konica-Minolta’s CS-1000A spectroradiometer feeding data to CalMan 5.3 software. Test patterns are sourced from Accupel’s DVG-5000 pattern generator. The reviewing environment consists of both bright and dark room scenarios and was calibrated for the average living room viewer. Blu-rays were spun up using an LG BD660 player.  For a detailed calibration report, please visit the Canada HiFi Forum under LCD displays.

Out of the box this TV is set to the Standard picture mode. It’s not exceedingly bright and comes across very cool giving the image a blue cast. Skin tones are pale and colours are intensified to compensate. Switching between the two preset “calibrated” modes exhibited an image-tinted reddish-blue. The Calibrated Dark mode is set with its reference white designed for studio settings – too dark even for the average darkened living room – and the other mode was too bright for both day and evening watching, and hurt my eyes from a viewing distance of 7 feet. Although I commend VIZIO for giving calibrated presets in the TV, the reality is that the TV still needs adjustment for the room it’ll be put in. I set out to adjust for comfortable viewing.

The TV exhibited outstanding performance after calibration with very little grayscale error. An accurate grayscale is desired so colours can be seen as intended by the filmmakers. After calibration, the fully saturated primary colours were still too saturated but I didn’t dare lower them too much or else I risked washing out all colours. 100% saturated red still leaned a bit towards orange and is visible if one is familiar with deep red in program content (like the Netflix background). This is a minor nit-pick on a TV that costs only $949. The level of picture accuracy that the E600i-B3 offers at this price is unsurpassed. After full grayscale and colour calibration, the E600i-B3 was a pleasure to watch.

I have been using a plasma TV as my reference for several years and I’ve always been aware of its drawbacks. Plasma TVs are noisy devices (dithering) and don’t display very bright images because of the auto brightness limiter (ABL). Watching this VIZIO LCD was an adjustment for me because the picture was typically brighter all of the time with regular content. Most of my viewing is from Blu-ray because I’m not happy with the current sub-quality of streaming video. I also got my daily dose of OTA TV. Using the TV’s speakers for programs was average and lean. DTS Studio Sound can be used to give the speakers a bit of a nudge in performance.

Since I set up this TV almost two months before writing this review, I watched the whole first season of Star Trek: The Original Series on Blu-ray. The VIZIO displayed all of the best details these transfers had to offer. The clear, bright images from the VIZIO gave me a new insight into the show sets and scenery. This TV also brought back the youth, pizazz and innocence of Captain Kirk, Spock, Uhura, and all the other characters.

Sticking with the theme of space and space travel, I had to spin a few scenes from several episodes of the latest Cosmos: A Spacetime Odyssey hosted by Neil deGrasse Tyson. All 13 episodes are HD eye candy that can’t be missed. This TV never missed a hair of detail of the live action shots, it represented the animation shorts without noise, and intricately displayed the computer generated visuals of the universe in my living room. It produced one clean picture when fed good quality 1080p video.

I also managed to tackle the whole fourth season Blu-ray set of The Walking Dead. The VIZIO had no issue displaying this drab, gritty series shot on 16mm film. I also got a chance to test the TV’s black level using the Active LED Zone function. What’s a zombie series if there is no danger in the nighttime scenes? The Active LED feature does exactly what it promises – contrast was very good within dark scenes. Dark parts of the picture remained dark while bright areas remain as such. Without a doubt the picture delivers far better blacks with the feature on rather than off. It also delivers better blacks than my 4-year-old plasma TV that is suffering from a rising black level. Despite the huge advantage, there is a slightly visible side effect of the Active LED function that will go unnoticed to the majority of viewers, and that is one of some light haloing around small objects. Since this TV has 16 zones of dimming, the individual zones are rather large and don’t offer the same level of precision as the 36 or 72 zones as VIZIO’s M-series and P-series televisions, both of which are able to tighten around smaller lit objects. But I’m certainly not complaining because I’m not aware of any other manufacturer offering any sort of local dimming on a sub-$1000, 60-inch TV. The E600i-B3 is an amazing performer all around.
If you’re not ready to fork out your hard earned cash for a 4K Ultra HD TV just yet, and are looking for a more affordable TV than any of the other big brands offer, you should definitely check out VIZIO’s range of TVs.

Given the level of performance this 60-inch E-series TV delivers for $949, I am curious to lay my eyes on the set-up M-series as well as the 4K P-series TVs recently announced.  The E600i-B3’s smart functionality, though not as extensive as offered by other brands, does not disappoint either.  If you decide to take a trip to a VIZIO dealer, just make sure to have enough space in the car because you’ll probably end up taking one home.