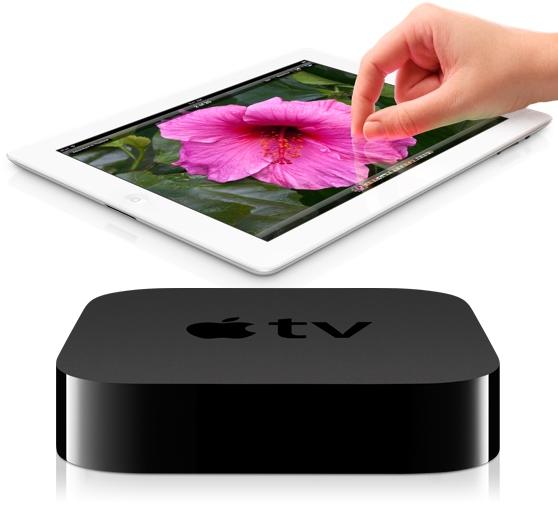 Apple has just announced 3rd-generation models of both the iPad and Apple TV.

Apple iPad 3:
The new 3rd generation Apple iPad features a new Retina display, new A5X chip, and a 5-megapixel camera with 1080p HD video recording. With the release of the iPad 3, the iPad 2 is now being offered at a lower cost.

The 3.1 million pixels in the Retina display are more than one million more pixels than an HDTV, and also has a 44% increase in color saturation.

The powerful new A5X chip with quad-core graphics has double the graphics performance of the former iPad 2 A5 chip.

iPad Wi-Fi + 4G with built-in next generation 4G LTE has the most comprehensive support for fast networks worldwide including HSPA+ and DC-HSDPA, and now both CDMA and GSM iPad users have the ability to easily roam internationally.

With iOS 5.1, the latest update to the world’s most advanced mobile operating system, the new iPad has a number of new features and enhancements.

The new iPad also supports dictation; tapping the microphone icon on the keyboard, the iPad listens and coverts your vocalized speech to text and can be used with third-party apps.

The new iPad Wi-Fi models will be available in black or white on Friday, March 16, 2012

Apple TV 3:
The new 3rd-generation Apple TV features 1080p programming. The new Apple TV features a simpler, refined user interface making it easier than ever to access your purchased movies, TV shows and music with iTunes Match right from iCloud. With AirPlay, users can stream or mirror their favorite content from their iPad or iPhone 4S to Apple TV.

Apple TV makes it easy to enjoy iTunes video, music and photo libraries from your computer right on your HDTV — and with iCloud you can instantly enjoy content that was purchased on your iPhone, iPad or iPod touch as well. iTunes Match customers can now play their entire music library from iCloud — even songs they’ve imported from CDs. Users can also control Apple TV with their iPhone, iPad or iPod touch using the Remote app, available as a free download on the App Store.

Apple TV users can choose from an incredible selection of programming including over 15,000 movies and over 90,000 TV episodes on the iTunes Store. Apple TV also offers great content from Netflix’s streaming catalog, live sports from MLB, NBA and NHL as well as Internet content from Vimeo, YouTube and Flickr.

Look for more details at: www.apple.com.