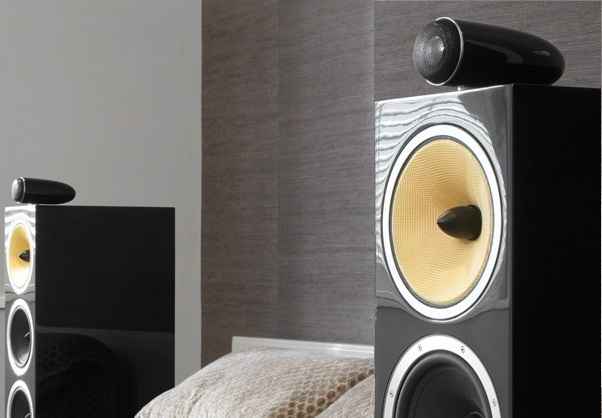 Bowers & Wilkins (B&W) has just added a new flagship model to their CM Series of loudspeakers.  The all new CM10 floorstander brings all-new features and technologies to the CM Series; the most obvious being a new double-dome aluminium tweeter housed in a separate module atop the cabinet.  With the new technologies the CM10 is clearly above its stablemates in performance and the rightful holder of its flagship status.

Isolating the tweeter improves imaging and dispersion with a more natural, spacious sound.  The new tweeter leverages carbon-bracing technology employed in the B&W PM1 speaker.  In the CM10, an aluminum dome is strengthened with a second aluminum layer that replicates the main dome’s profile with the center part cut out – a ‘double-dome’ design, stiffening the structure and increasing performance.  The double-dome’s first break-up frequency is at impressive 38kHz for cleaner reproduction in the audibile range under 20kHz. This new tweeter has greater sensitivity than the carbon-braced approach with very similar results, yet higher output and wider dynamic range.

The Kevlar FST driver in the CM10 is a first for the CM Series.  This midarange driver is decoupled from the rest of the cabinet, which reduces audible cabinet coloration and improves imaging.  The FST drive unit is secured in place by a drawbar mechanism, as found in 800 Series Diamond models. Moving the midrange driver closer to the top of the cabinet has similar results to placing the tweeter on top. It improves upward dispersion and increases the sense of airiness.

The CM10 is produced in two real wood veneers (Rosenut or Wenge) and in a gloss black finish.  It will be available by the end of July at a MSRP of $4,000.00/pair.  Look for more information at: www.bowers-wilkins.com.