Douglas Brown2015-11-10T21:29:34+00:00November 9th, 2015|Audio, Features, Meet the Manufacturer|Comments Off on How Bryston Got Into the Loudspeaker Business – An Interview with James Tanner 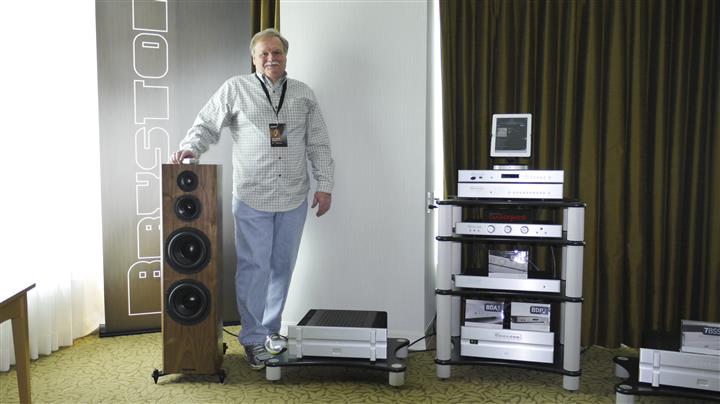 Earlier this year, I had the pleasure to met face-to-face with James Tanner, the VP of Sales & Marketing at Bryston, to discuss the history behind the company’s loudspeaker business.

DSB: “Why did Bryston decide to enter the highly competitive consumer loudspeaker market?
JT: “Over the 40 years I’ve been in audio, I’ve owned every speaker that would be considered a high quality loudspeaker: Klipsch horns, Apogees, all the Magnepans, and most of the dynamic speakers. I decided I wanted to build a reference loudspeaker for my own purposes – and I wanted it to be fully active. I’d had experience at the professional level and I recognized that there are technical advantages to using an active setup.”

DSB: “And that led you to Axiom?”
JT: “I knew two engineers at Axiom from back-in-the-day at the Research Council in Ottawa. So I called them and said: ‘I’d like to build a reference speaker. Would you be willing to help me?’ They said ‘Sure’. And the reason I called them was two fold: one, I’d called around to a few other companies and discovered that the cost was going to be prohibitive; and two, they (Axiom) were one of the few companies who actually had an anechoic chamber that was as large as the one in Ottawa at the NRC (the National Research Council).” [Sips his coffee].
JT: “So we put together a model that was fully active. We ultimately ended up with what’s now called the Model T. I had it at home and, from time to time, dealers and distributors would drop in. They’d say: ‘Those are really good speakers James… you should be doing something about it.’

DSB: “About what… manufacturing them for the retail market?”
JT: “Yes. And I said: ‘The problem is… they’re too complicated. You’re talking about 6 channels of amplification and an outboard electronic crossover. Most people are just overwhelmed with something as complicated at that.’ So I called Axiom and asked: ‘Could you do a passive version of these?’ And Ian answered: ‘Sure. We can get about 90% of the sound quality of what the active system does from a passive model.’ And that was the start of what we called the Model T passive.”

DSB: “So releasing a passive version for the public was driven by the need for less complexity?”
JT: “Yes. But I also knew that different speakers sound totally different in different rooms. I’d owned di-poles, mono-poles, and I’d had direct radiators. So I started doing research into understanding what sounded best in average homes. And that meant a forward firing, wide dispersion, dynamic loudspeaker. [Pauses]. I always remember my Klipsch horns. They were incredibly dynamic. When you heard a gunshot, the sound of it – of the gunshot – was incredibly lifelike; because it’s huge dynamics in real life. Right?”

DSB: “Yeah… sure.”
JT: “So, after extensive research, my criteria for custom loudspeakers became: a), a forward direct-radiating model; b), the ability to handle huge dynamics; c), a front-firing wide dispersion speaker; and d), they’d have to be affordable. And I wanted to have all four of these characteristics in one speaker.”

DSB: “That’s a lofty goal.”
JT: “Yes it is. But I’d found that most people prefer a speaker that has good on and off axis response – as flat as possible. So that was my number one criteria.”

DSB: “You mean… you wanted to build speakers which create sound waves in a wide dispersion pattern?”
JT: “Yes… exactly. So that negated horns, because they usually beam sound at a listener in a tightly focused dispersion pattern. And it also negated di-poles, to a degree, because they have a tendency to… well… if you move off axis, the sound quality decreases; considerably.” [Sips his coffee].
JT: “It forced me to go in the direction of dynamic speakers where the dispersion characteristics and wave launch were all like that of a dynamic, forward firing, wide dispersion loudspeaker.”

DSB: “Did you get so tired of trying everything else that was available, that you thought: ‘Okay… I want to build my own custom made, one-off, reference calibre speakers.’ ”
JT: “In retrospect, I think it was. I was getting older and dragging speakers up and down the stairs was becoming a bit much. [JT laughs]. So I thought: ‘I’m gonna build something that I can leave in the basement; and that will be a reference point for me for years to come.’ The way to look at Bryston’s speakers is: they’re 70% science; and 30% me.”

DSB: “What specifically do you mean by ‘MY experience’?”
JT: “The way that all of Bryston’s speakers developed and the way they exist today is 70% based on engineering science and 30% based on my experience in listening to loudspeakers over a 40 year time frame.”

DSB: “So the 30% ‘ME’ side is your personal experience—and knowledge—in listening to a wide variety of reference quality loudspeakers?”
JT: “Yes… precisely. ‘Cause it’s not all science. At some point, you have to sit down and actually listen to products. Right?”

DSB: “You’d hope so. [Both laugh]. But what about those who only think a speaker can be assessed through anechoic chamber measurements?
JT: “The room is going to influence the sound. You cannot ignore the fact that the ceilings, walls, and floors affect the sound. During the first 30 milli-seconds, your brain and ears are sorting out all of the sonic information and determining directionality; where exactly specific sounds are coming from. In the past, we were taught: ‘Ohhh no… you’ve got to get rid of first and second reflections, because your brain gets confused as to where the image is coming from.’ That’s simply not true.”

DSB: “Try telling that to some loudspeaker manufacturers.”
JT: [Laughs]. “With our speakers, we recommend that you not treat the room. You want a normal room with rugs and drapes and furniture, because your ear-brain will perceive that as a far more natural environment. And the energy that is striking all of those surfaces will have the same tonal balance as what you’re listening to on your system. You perceive it as a sense of openness and spaciousness, rather than as a direct sound coming from one location only.”