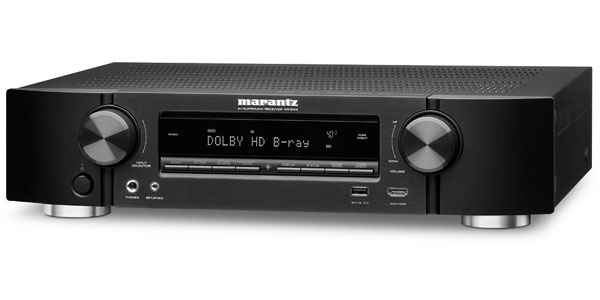 Marantz has just introduced two new affordable, slim-line networking AV receivers – the NR1504 AV ($599) and the NR1604 ($729). The NR1604 features Apple’s AirPlay, allowing users to stream their iTunes music whether from Mac or PC, as well as music stored on their iPhone, iPad, or iPod touch. The NR1504 features 5-channel surround sound, while the NR1604 offers 7 channels. Both receivers deliver powerful and realistic surround sound from virtually all modern popular entertainment sources.

Both the NR1504 and the NR1604 feature advanced networking capabilities that allow users to enjoy thousands of Internet radio stations as well as music streaming services, such as Pandora, SiriusXM and Spotify. Connecting portable devices, including an iPhone, iPod or iPad, is a quick and easy process thanks to the units’ front panel USB port. Users may also connect other devices such as a USB thumb drive or a portable USB hard disk drive to play their favorite music tracks. The optional RX-101 Bluetooth wireless adapter permits music streaming from portable Bluetooth devices to the NR1504 and NR1604. Providing even more versatility, both models can also be controlled via the Marantz Remote App.

In addition, the NR1604 features multi-zone functionality, which allows music to be enjoyed in the main entertainment room, or sent to a different room such as a kitchen or bedroom using an additional pair of speakers. The NR1604 features multiple configuration possibilities, including a full 7-channel surround sound setup, or the option to power a 5.1 channel home theater system in the main room, while using an additional pair of speakers in another room. The independent source selection function even allows users to enjoy their favorite Hollywood blockbusters where the system is setup, while others can simultaneously listen to music from a separate source in another room.

The Audyssey MultEQ room acoustic measurement and correction system makes it a snap to optimize the home theater setup for outstanding audio fidelity. Via the supplied microphone, MultEQ measures the characteristics of each speaker in the system (including the subwoofer) and quickly generates precision digital filters for the smoothest, most natural tonal balance over the entire audio range.