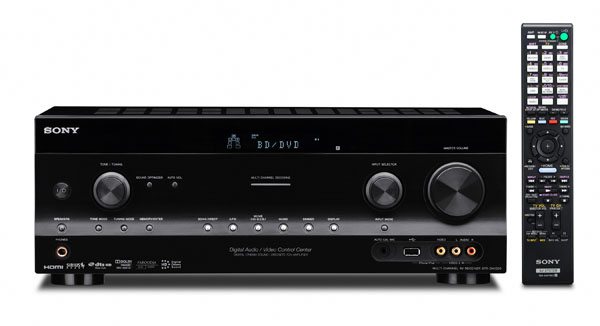 Sony has just revealed a trio of entry level, 3D capable AV receivers which will go on sale this spring. The new models include the STR-DN1020, the STR-DH720 and the STR-DH520 7.1.
The flagship STR-DN1020 receiver is a gateway to streaming music with access to Internet audio services including vTuner when connected to an existing broadband home network through the model’s Ethernet port.
The device is Digital Living Network Alliance (DLNA) certified allowing it to play digital music from your home PC or other connected DLNA device. It can also stream audio to Sony’s HomeShare wireless network speakers (sold separately) and features Sony’s PartyStreaming mode with synchronized playback on multiple speakers.
The 7.1 channel, 110 watt (8ohms 1kHz 1% THD) receiver is compatible with the Sony “Media Remote” app that turns an iPhone, iPod touch or Android mobile device into a remote control. The app, which can be downloaded from the Apple App Store or the Android Marketplace, functions as a full remote with a keyboard controlling the receiver.
The STR-DN1020 lives up to Sony’s high-quality video and audio standards as well. The model features a Faroudja DCDi Edge video processing chip that up converts and upscales analog signals to near 1080p HD quality via HDMI, while its Digital Legato Linear (D.L.L.) advanced sound processing technology also improves audio fidelity. D.L.L. analyzes standard definition (compressed) audio signals such as Dolby Digital and dts format sound and upscales them to 192 KHz resulting in higher quality audio.
Audio from the receiver is also fine tuned with the help of Sony’s advanced Digital Cinema Auto Calibration (D.C.A.C.) with Automatic Phase Matching and Sound Optimizer technologies.
Utilizing the included microphone, D.C.A.C. measures and analyzes room acoustics, adjusting the receiver’s output to deliver the best possible audio, while allowing all of the speakers to use the same phase as the front channels. At the same time, Sound Optimizer automatically improves audio for a consistent surround image at any volume level.
The details of each receiver can be found below.