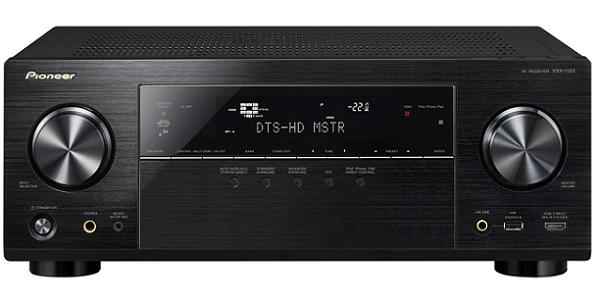 The flagship VSX-1123 also features Pioneer’s AVNavigator (now available for the Mac), an interactive owner’s manual that provides a linked two-way interactive manual, giving users a quick way to learn about all of the new features of the AV receiver.

Pioneer Control Apps:
The latest versions of Pioneer’s ControlApp and iControlAV2013 apps, available for download from the App Store (www.AppStore.com) or Google Play (www.GooglePlay.com), expand control over the receivers and their home theater settings from the convenience of a smart device.  Both apps offer a new feature that enables users to access the music libraries stored on their devices and create playlists that can be streamed wirelessly to the receiver, all from within the app1. ControlApp, available for use with the VSX-823 and VSX-1023, offers features available in the previous version of the app, including management of inputs, audio adjustments and modes, and streaming content, as well as a dedicated “ECO Manager” page for energy efficient settings. The new iControlAV2013 App, for use with the VSX-1123, has been completely redesigned to feature a completely new user interface and “finger flick” touch action for faster access to features2.

MHL 2.0 Input:
A feature first introduced in the flagship Elite SC models is now available on VSX-823 and above models, offering users the same Mobile High Definition Link (MHL) connectivity built in on the front of each receiver for integrating smartphones as additional sources of high quality audio and video. HDTV owners can play HD video content with multi-channel sound (up to 7.1-channels) through the receivers while simultaneously charging their Android devices. The new MHL 2.0 adds support for 3D content, 1080p 60Hz, and faster smartphone charging.

HTC Connect:
With HTC Connect, owners of compatible HTC smartphones (including the new HTC One Phone) can conveniently stream music content directly to the Pioneer networked-enabled receivers via a wireless connection3. HTC Connect enables music playback and control of the receiver’s volume on from the smartphone with the ability to use the device simultaneously for other functions, from making and receiving calls and taking pictures to downloading the latest apps and surfing the Web. Pioneer is the first consumer electronics manufacturer to receive HTC Connect certification and provide a unified connectivity solution for Android smartphone users via HTC Connect technology incorporated into its receivers (and wireless speakers).

Apple’s AirPlay:
AirPlay is built into the top three models, allowing users to stream their iTunes music whether from Mac or PC, as well as music stored on their iPhone, iPad, or iPod touch4.

Internet Radio and Music:
Providing access to a variety of music content, models VSX-823 and above feature today’s most popular Internet radio music services including PANDORA and vTuner. Each network enabled receiver is also DLNA 1.5 Certified to allow music content playback from a networked DLNA server or DLNA application running on a Windows PC, Mac, or smartphone connected on a home network, either through an Ethernet connection or optional wireless Wi-Fi adapter (available on VSX-1123).

Zone 2 HDMI Out:
Pioneer continues to expand connectivity options on its receivers, offering eight HDMI inputs on the VSX-1123. For an expanded high-definition entertainment experience throughout the home, the VSX-1123 also offers HDZone, a Zone 2 HDMI out for routing either the same signal as the main zone or a separate source to a second zone via HDMI. A third audio only zone can also be powered by the receiver and controlled through Pioneer’s iControlAV2013 App.

ECO Mode:
Pioneer designed the new 2013 models with the added benefit of reducing power consumption in both on and stand-by mode. With the new ECO Mode users can, in real time, analyze and control peak volume corresponding to the content being played to reduce power consumption while still maintaining content audio quality (ECO Working); reduce power consumption when the receiver is in stand-by (ECO Stand-by); and easily set the “Ecology function ON/OFF” feature in three different ways – from the remote control, ECO Manager on the iControlAV2013 App, or the front panel of the receiver (ECO Access).