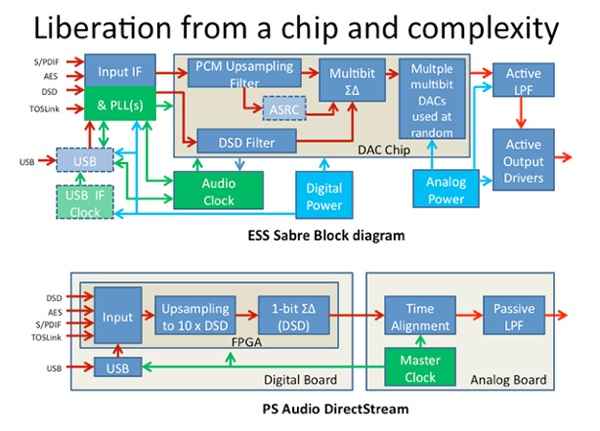 In 1981, music was reproduced exclusively on analog-based turntables and tape decks.  In 1982, Sony and Philips announced “Perfect Sound Forever” through their introduction of the Compact Disc format.  This new PCM-based Compact Disc format began a 30-year war between the analog and digital purists in their question for sonic perfection.

PS Audio claims that most modern DACs mask recorded details due to a faulth PCM decoding process and that to extract all the detail within PCM recordings requires an  altogether new processing method – something revolutionary.  PS Audio claims that their new DirectStream DAC is the revolutionary solution that finally reveals these buried details within PCM-based digital recordings.

DirectStream converts all digital inputs, including PCM, to pure 1-bit DSD and in doing so, PS Audio states that the PCM feed becomes more linear and less edgy.  The result is that never-before-heard musical details are revealed.

The secret is supposedly in the simplicity of the solution – as shown in the diagram above.  The top is a block diagram shows one of the most respected PCM-based processors, the ESS Sabre DAC.  While the lower diagram shows the simplicity of the PS DirectStream DAC.  PS Audio explains that current PCM processors mask subtle details becuase of the complexity, multiple clocks, power supplies and IC limitations.  PS Audio’s DirectStream is a totally new approach to processing digital signals.

The PS Audio’s DirectStream DAC will be launched on March 1, 2014 with shipments to dealers and distributors beginning in April, 2014.  The MSRP will be $5995 U.S.  PS Audio will provide an upgrade program for all PerfectWave DAC owners to move to the new DirectStream standard.  Visit www.psaudio.com for more information.