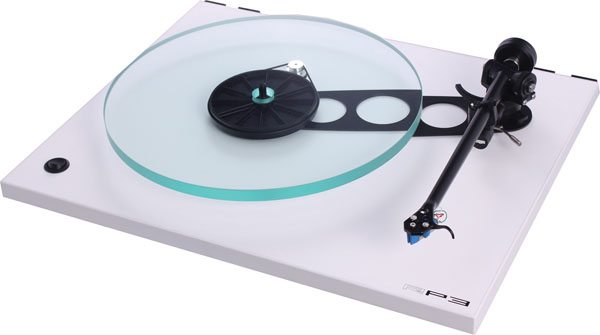 Just a little over three years ago I joined the CANADA HiFi contributor team and my first assignment was a review of the then new Rega P1 turntable which was published in the February/March 2009 issue. I enjoyed the P1 turntable so much that I purchased one for myself and that rekindled an old love affair with my vinyl collection. Since that turntable review I have grown my collection of LPs, purchased record brushes, a record cleaner, a cartridge upgrade, a stylus force gauge and an antistatic gun. While the above additions have brought upon some small improvements to my analog setup, I’ve really been itching to try out a higher quality turntable to extract even more detail and warmth from my LPs. While the Rega RP1 has come to market as a replacement for the P1, I was interested in auditioning the new RP3 model which replaces the popular P3-24 model.

Although the RP3 is a new model number it is not a new design, but rather a design that has been evolving for more than 30 years now. The evolution of the RP3 goes back to the Rega Planar 3 which debuted in 1978 and continued on as the iconic P3 and more recently the P3-24 turntable. In many ways the RP3 table looks pretty much like previous generations maintaining the simple and functional design that has worked so well. The product literature indicates that Rega has upgraded the RP3 turntable in a number of areas which include a new tonearm, a new double brace and an improved lightweight plinth. The largest improvement over the previous turntable models is the addition of a double strengthening brace which is constructed from a hard phenolic resin and used between the tonearm mounting and the main hub bearing. This “Double Brace Technology” provides increased stiffness between the tonearm and the main bearing where the increased rigidity is required most. The RP3 comes with a new tonearm, the RB303 which is hand assembled and features a more rigid arm with better weight distribution that results in better resonance control. The cartridge mount has also been improved and allows for a three-screw arrangement which I find makes it much easier to align the cartridge. Further refinements have been made to the lightweight plinth by reducing the weight while maintaining rigidity of the plinth. This unique plinth design was pioneered by Rega and is constructed using a very lightweight particulate core which is coated with a very rigid phenolic resin skin. This rigid lightweight plinth design limits energy absorption and unwanted resonances which can induce unnatural distortions to the music. High quality parts are used throughout the RP3 – including a precision manufactured main bearing and a low noise 24V motor that is hand tuned to further reduce vibration. The suspension is comprised of three solid rubber feet and like any record player will sound best with a dedicated support platform which is not coupled to a flexible floor and located as far away from speakers as possible.

The Rega RP3 was shipped to me from Canadian distributor Plurison inside an oversized double box with plenty of air cushioned packing material. Inside the shipping box was the thick Rega cardboard box which contained the turntable. The outside of the box identifies the turntable model, colour of the plinth and the serial number. The demonstration unit came in a white finish. Before one unpacks the turntable, I suggest taking a few moments to observe the turntable packaging guide which is printed on the side of the box as this will help with unpacking the delicate turntable. It is also a good idea to hang on to the Rega cardboard box as this will be the safest way to package and safely transport the turntable in the future. The first turntable unit that was shipped out to us for review had been improperly packaged and as a result the centre hub had fallen out of place allowing the inner bearing and lubricant to escape. Unfortunately this required that the turntable be returned to the distributor to ensure that the unit was in proper working order prior to conducting the review. The initial setup of the turntable is very simple. Start by attaching the drive belt from the centre hub to the drive pulley. There are two wheels on the drive pulley, the small pulley wheel sets the speed to 33-1/3 RPM while the large pulley wheel will set the speed at 45 RPM. The glass platter simply drops onto the centre hub and the felt mat is placed on the platter. The turntable comes with an acrylic dust cover which easily drops into the hinge brackets at the rear of the plinth. Next you need to setup the tonearm which is somewhat more involved. Steps outlining setup of the tonearm are contained in the one page (double sided) instructions that are provided with the turntable. This review unit was shipped with an installed Rega Elys 2 cartridge. To confirm that the cartridge was properly fitted I checked the alignment using the supplied alignment protractor, and no adjustments were necessary. The next step is to setup the tonearm and set the tracking force. The instructions outline how to setup the tonearm and set the tracking force using a visual method and the pressure dials on the tonearm. In the past I have found that pressure dials on tonearms are often not very accurate so for peace of mind my preference is to use a scale in order to accurately set the tracking force. I used a simple and inexpensive balance pivot scale made by Ortofon which retails for about $15. The simple pivot scale works ok, but a more accurate and modern approach to set the tracking force would be to use a digital stylus gauge which typically costs about $100. Getting the tracking force set properly is important as too much force could result in excessive wear on your records and the stylus and too little force may result in reduced sonic performance. Now that you have taken the time to properly setup the turntable you are ready to sit back and enjoy your favorite LPs.

For the sonic evaluation of the RP3 my listening setup consisted of a NAD C162 preamplifer, a pair of OddWatt Audio KT88 push-pull monoblock amplifiers and Dallas rear-loaded horn speakers with Fostex FE206E drivers. I used a number of different records that I am familiar with that ranged from pop and rock albums to symphony music. Like the other Rega turntables I have heard, I found that the RP3 delivered a rich lively sound that really engages the listener with the music. By far the biggest improvements that I noticed over my entry-level P1 turntable were in the bass regions which had a better weight and resulted in a much more balanced overall sound. While listening to some of my favorite albums, the self-titled Tracy Chapman [1988 Elektra/Asylum] and Kraftwerk – The Man Machine [1978 Capitol, HQ re-issue] I heard a firmer low-end with additional texture. Through the RP3 the music had a fast and lively pace with good detail and dynamics. With Supertramp – Crisis? What Crisis? [1975 A&M, Audiophile Series re-issue] I found that the high-end response was extended, detailed and free of any graininess which can be quite common on entry-level turntables. Personally I find surface noise to be very distracting and because I enjoy a lot of music with quiet passages it is important to me that unwanted and background noise is low. With Arthur Fielder and the Boson Pops playing the music of Paul Simon [1972 Polydor] I was really impressed with how well the Rega RP3 (equipped with the Elys 2 cartridge) handled the occasional clicks and pops by seemingly pushing them off into the back.

For those who like to tweak and further improve their turntables, Rega offers a number of different upgrades for the RP3. When purchasing the turntable there are three cartridge options. If you already have a great cartridge, the RP3 can be purchased without any cartridge for $1,095. There are two moving magnet cartridges available from Rega, the Elys 2 for $300 and for those looking for even higher-quality the Rega Exact for $595. Both the Elys 2 and Exact cartridges are handmade. Additional upgrades include a Drive Belt upgrade ($60), and the TT PSU electronic speed changer and power supply ($395). The TT PSU offers a lower noise floor, better speed control and also the ability to change the speed of the turntable without having to lift the platter and move the drive belt to a different pulley wheel.

Overall I found the RP3 to be a significant sonic improvement over entry-level turntables like the P1 and at triple the cost one should expect such an improvement. The biggest improvements came at the frequency extremes (bass and highs) which allowed the RP3 to deliver a well balanced sound that was engaging and one that can be listened to for hours on end without the onset of fatigue. For the price the Rega RP3 delivers good value and is a logical upgrade to any entry-level turntable. With the upgraded tonearm and new double brace mounting the RP3 will also appeal to long-time owners of earlier P3 models.