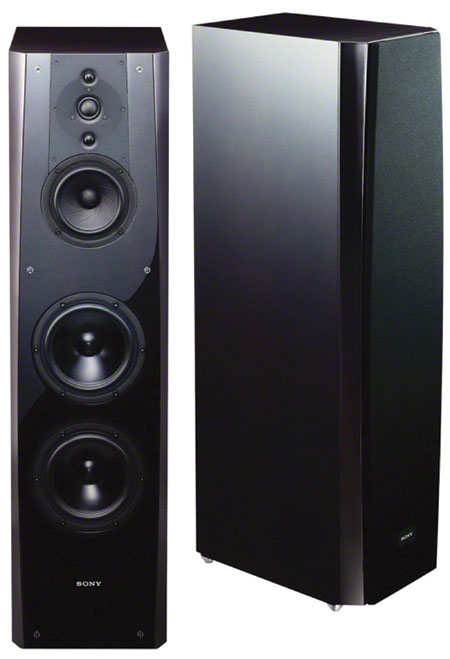 There is no doubt that Sony has been one of the giants in the sphere of consumer electronics for the better part of the last century. However, to audio enthusiasts, this brand is better known as one of the co-developers of the compact disc system, which may be past its prime, but is still quite ubiquitous in today’s world of high-end audio.

In the decades following the debut of the compact disc system, Sony’s top-of-the-line compact disc players were a keenly sought after audio component and were very well known for their performance, aesthetics and build quality, but most of their other products were designed and built mostly for the mass market and for those seeking mid-fi products. Over the past few years, Sony has been making impressive inroads into another segment of the audiophile market, namely high-end loudspeakers.

Sony made its debut in this sphere a few years ago with the introduction of the SS-AR1, a no holds barred, high-performance loudspeaker that made the high-end audio industry sit up and take notice. At around $30,000, the SS-AR1 is hardly a cheap speaker and the competition at that level is intense to say the least. However the SS-AR1 held its own and went on to receive rave reviews with some calling it one of the best values in that price range. That was followed by the slightly more affordable SS-AR2, which also garnered high praise for its performance and value.

The confidence gained with the introduction of those two models prompted Sony to develop a loudspeaker that would play in the very crowded $10,000 price category which many audio enthusiasts regard as the point of diminishing returns and so it is the end point for many upgrade paths. This has made it a very lucrative price point for most of the world’s leading speaker manufacturers. Sony christened their new baby the SS-NA2ES and that is the subject of this review.

One of the unique characteristics of the flagship SS-AR1 is the speaker enclosure, which went against conventional wisdom. The Holy Grail for most speaker manufacturers is to make the speaker enclosure as ridged, inert and non-resonant as possible so that it does not ‘sing’ inharmoniously with the drive units, which results in distortions that the human ear can hear as unpleasant additions to the sonic performance of the speaker. Towards this end, some brands have even developed their own materials, some of which are so hard, heavy and dense, it takes special blades to even cut those materials to the sizes required by the speaker enclosure. While, in theory, controlling enclosure harmonics is an effective way to boost speaker performance, no one has yet found a material that is totally inert. Sony decided to take the opposite route. Rather than trying to beat enclosure resonance into submission, they decided to design an enclosure that would work with and enhance the speaker performance with its unique acoustical properties.

Like its big brothers, the SS-NA2ES utilizes Nordic Birch for the enclosure as well as for the internal bracing. This wood, which is grown in the very cold climate that exists close to the North Pole and harvested at a particular time of the year, displays both moderate loss and moderate strength unlike the birch that is grown in areas closer to the equator.

Sony also paid fanatical attention to the speaker baffle board because of the key role that it plays in the speaker performance. The ideal baffle board needs to absorb the powerful vibrations from the driver units without adding anything to the sound. To attain this, Sony used an extra thick 36 mm baffle board, and oriented the joint between the board and the back cavity in the direction of the driver oscillation, so as to form a ‘lossy’ joint. This structural design isolates the back cavity side from the powerful direct vibrations of the driver units.

Sony’s engineers found that the human ear can clearly perceive a difference in harmonics, even those that measuring instruments may not always be able to detect. They therefore subjected the SS-NA2ES enclosure to numerous listening tests during which they fine-tuned it by working with Japan’s finest woodworking craftsmen to modify the adhesives, joining methods and orientation to achieve the most desirable enclosure harmonics.

Meticulous attention was also paid to the way the interior of the enclosure was divided to optimize the performance of the driver units. The midrange and tweeter have been placed in an independent sub-enclosure with the midrange cavity occupying the top third of the cabinet. This is acoustically isolated from the part of the enclosure housing the woofers with an air cavity between two partitions so as to prevent the powerful vibrations of the woofers from interfering with the fundamental parts of the music produced by the mid-range and tweeters. The midrange driver unit has been given enough space to perform with minimum stress and allow it to deliver maximum dynamics and headroom. The same minute attention to detail was given to the driver units, all of which were developed from scratch especially for the SS-NA2ES.

Sony designed a brand new woofer with a stiff aluminum diaphragm, which is driven with an oversized magnetic circuit. Utilizing two woofers per speaker helps the SS-NA2ES move a lot more air and generate deeper, more tuneful bass. The woofers are complemented with a 130mm midrange, which was also developed especially for this speaker. It has a paper cone with spiral, radial grooves etched into the diaphragm to minimize resonance and produce a smoother mid-range.

For the tweeter, Sony pulled out all the stops to optimize performance. They developed what they call an I-Array  wide dispersion tweeter system that is composed of a 25 mm main tweeter and two 19 mm assist tweeters. At first, I was skeptical of this configuration because multiple high frequency sound sources tend to produce unwanted peaks and dips resulting in unpleasant sound coloration. However, when going through the product white paper I found that Sony engineers spent a whole year using computer simulations and listening tests to calculate the optimum distance between the three tweeters, the installation depth and the shape of the frame on which the tweeters are mounted, so as to make the three tweeter function as if it were a single wide dispersion source.
All three tweeters are soft dome with the main tweeter assisted by a vent in the magnetic circuit behind the diaphragm to minimize unwanted resonance and vibrations. This also helps smooth out the back air pressure for a less constrained and more extended high frequency response. The diaphragm’s edge integration and bobbin bonding method extends the tweeters response to 30 kHz, at minus three decibels.

The main objective of the I-Array tweeter system is to achieve maximum dispersion. Some speaker designs try to deliver more vividness by employing a super tweeter, Sony on the other hand, has chosen to do it with the three-tweeter system. They feel that their approach dispenses with the artificiality of the super tweeter and delivers a vividness that is more natural and closer to the live performance by ensuring that the tweeter achieves maximum directional width at all the frequencies that it reproduces.

For those of you who pay a lot of attention to technical specifications of the audio gear you plan to buy, here are the vital statistics for the SS-NA2ES.  It is a floor-standing 3-way design, utilizing a 6-driver bass reflex system with a frequency response of 45 Hz to 45 kHz (at minus 10 decibels).  It employs multi-slope crossover networks at 400 Hz and 4,000 Hz, offers a sensitivity of 90 decibels, a rated impedance of 4 ohms and power handling of 100 watts. The dimensions are 255mm wide, 900mm high and 415mm deep. It weighs in at 32 kilos and is manufactured in Japan.
This mountain of information makes it very evident that Sony has put in a lot of new technology into the SS-NA2ES. So does the output justify the plethora of technological input? That is what I set out to discover.