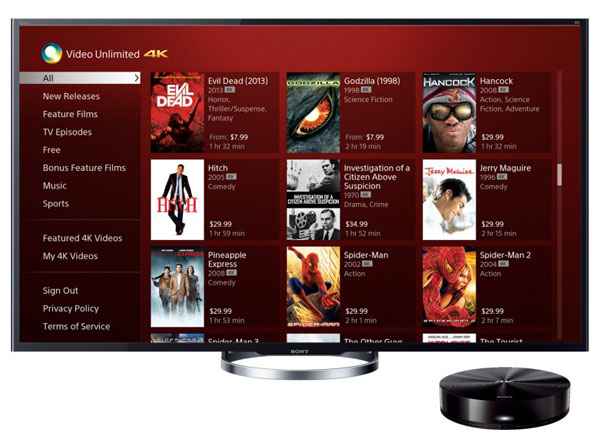 Current owners and potential new buyers of 4K Ultra HD TVs finally have some new native 4K content to watch, at least in the US.  Earlier this month Sony launched the world’s first 4K Ultra HD video download service called the Video Unlimited 4K service, which offers an expanding library of native 4K Ultra HD feature films and TV shows.  The service currently offers more than 70 full length native 4K Ultra HD feature films and TV shows from Sony Pictures Entertainment and other notable production houses.  The content can be rented or purchased using Sony’s 4K Ultra HD Media Player (FMP-X1).  At the time of this writing, Sony had not yet announced the availability of its Video Unlimited 4K service or the FMP-X1 Media Player to Canadian customers, although an announcement is expect to follow soon.

To coincide with the launch of this new service, Sony also expanded its 4K Ultra HD TV line-up with the addition of the X850A series, available in the 55-inch XBR-55X850A and the 65-inch XBR-65X850A.  With four times the resolution of Full HD and Sony’s unique TRILUMINOS Display, the new X850A incorporates a slim bezel with an elegant design without the integrated magnetic fluid speaker system in the X900A series (models XBR-55X900A and XBR-65X900A) now on the market. This new design offers customers the flexibility of connecting to an existing or separate home theater system.

Sony Entertainment Network’s Video Unlimited 4K download service is now live, offering feature films, movies, short-form videos and TV shows in native 4K Ultra HD resolution for download to consumers with a Sony Ultra HD Media Player and Sony 4K Ultra HD TV. Feature films and TV episodes have been prepared with the ultimate picture and surround sound quality in mind, carefully optimized for the best viewing experience. Over 70 feature films and TV shows are now available through the service, with a library of more than 100 expected to become available in 4K Ultra HD before the end of the year.

Available now on the service is the hit TV show Breaking Bad, as well as movies including Moneyball, Think Like A Man, Premium Rush, Ghostbusters, The Amazing Spider-Man, Funny Girl, The Guns of Navarone, and many more.

Video Unlimited 4K will feature the hottest new releases for rent or purchase, including upcoming releases like This is the End, After Earth and Elysium. Owners of the Sony 4K Ultra HD Media Player (FMP-X1) will receive updated content over the internet, enabling them to rent or purchase the latest entertainment.

The cost for TV episodes is $3.99, while feature films start at $7.99 for a 24-hour rental, or $29.99 for a purchase. Select purchased titles include an UltraViolet digital version of the movie or TV show, enabling consumers to further enjoy their content on the go (in high definition or standard definition).

A program is now available for owners of the Sony 84-inch 4K Ultra HD TV (XBR-84X900) to gain access to the Video Unlimited 4K download service. Details on a program for Sony 4K projector (VPL-VW1000ES) owners will be announced at CEDIA later this month.

The Sony 4K Ultra HD Media Player is used to access, download, store and play back 4K content from the Video Unlimited 4K service. With a built-in 2TB hard drive, the FMP-X1 Media Player can store up to 50 feature films in native 4K resolution and uncompressed surround sound, with the ability to expand this by connecting an additional external USB hard drive available separately.

The player comes pre-loaded with 10 bonus feature films and video shorts that owners can watch immediately at no additional charge, including Bad Teacher, Battle: Los Angeles, The Bridge on the River Kwai, The Karate Kid (2010), Salt, Taxi Driver, That’s My Boy, The Amazing Spider-Man, The Other Guys and Total Recall (2012). The FMP-X1 Media Player is exclusively compatible with Sony 4K Ultra HD TVs and available for $699, or $499 if purchased together with a Sony 4K Ultra HD TV.

All models are Wi-Fi enabled and offer a wide range of internet connected services including Sony’s smart connect solutions, supporting cross-device connectivity between mobile devices and their TV. With features such as One-touch mirroring and TV SideView, Sony’s XBR-series TVs provide greater control and additional content options by interconnecting media sources across the home and mobile entertainment ecosystem.

After pioneering 4K technology in the professional field and bringing it into consumers’ homes through televisions and films, Sony is now also applying the technology to personal video for the first time with its new 4K Handycam consumer camcorder (FDR-AX1). Consumers have been enjoying personal photos in 4K Ultra HD resolution and they can now capture their family memories in the highest resolution video quality available.

Sony is prepared to support the HDMI 2.0 specification on its line-up of 4K Ultra HD televisions with an easy firmware update to be available over the Internet by the end of this year.  Just released by the HDMI Forum, the HDMI 2.0 industry standard offers a significant increase in bandwidth, providing features such as life-like video resolution, making it ideal for fast-moving 4K Ultra HD 60p content such as sports.