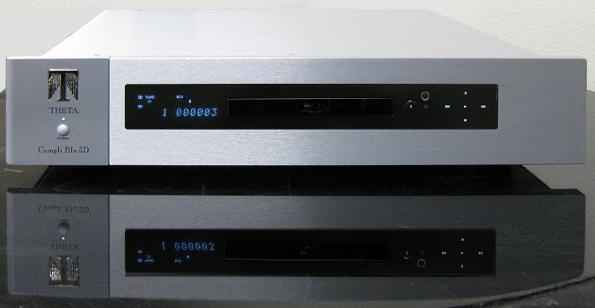 Theta Digital has just recently announced that it is now shipping its latest universal disc transport – the Compli Blu 3D.

The Compli Blu 3D is optimized for use with advanced preamp/processors and outboard DACs.  Theta has indicated that rather than compromise performance by incorporating an in-board DAC, they have optimized disc playback by creating a dedicated transport that can be paired with a separate outboard DAC.    The design of the new Compli Blu 3D is said to eliminate any possible interference from ground-currents with a power supply that uses a custom toroidal transformer and added RF filtering.

The Compl Blu 3D uses the industry’s leading video card and disc loader featuring Marvell’s QDEO processing to insure that Theta’s users will have the the optimum picture regardless of encoding, disc cadence or de-interlacing plus a novel audio topology that eliminates analog audio outputs.

Further, Using the included WiFi adapter (compatible with 802.11 b/g/n), or the built-in RJ45 Ethernet port, users can stream NetFlix, VuDu, Pandora and others directly plus the Compli 3D is DLNA compliant for streaming A/V playback from a PC or laptop.

The Compli Blu 3D is available in platinum or ebony color, with standard or rack-mount chassis and is available for world-wide use in versions with 117 or 230 volt AC power supplies.