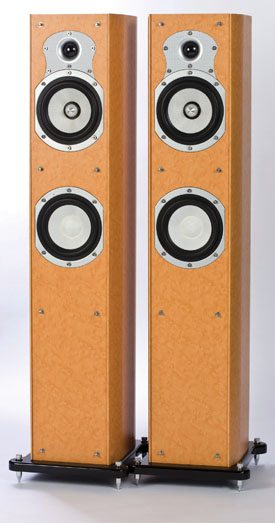 There is a good deal of confusion that surrounds loudspeaker specifications which seems to stem from a combination of limited information, different test methods and a lack of consumer knowledge.  Some specifications are intuitive and easy to understand, such as dimensions, weight, type of speaker enclosure and crossover frequency among others.  The purpose of this article is to explain the more technical, and often misinterpreted, specifications including speaker impedance, sensitivity and frequency response.

The sensitivity specification of a loudspeaker is one of the more useful specifications.  It will give you a general idea of how loud the speakers can play and how much power will be required to achieve desired listening levels.  Speaker sensitivity is the measurement of the amount of sound pressure that the loudspeaker will produce (i.e. how loud it will play), at a distance of one meter, when only one Watt of power is applied from an amplifier.  Sound pressure is typically measured in Decibels (dB).

Consider a speaker that has a rated sensitivity of 93 dB/1W/1m.  This sensitivity means that at a distance of 1 meter from the speaker, the sound pressure level (SPL) will be 93 dB when 1 Watt of power is applied.  There are a couple of general rules to remember that will let you put the sensitivity specification into context.  For every extra 3 dB of SPL that you would like, you need to double the input power.  So if we consider a loudspeaker with a sensitivity of 93 dB/1W/1m, at 1W of power the SPL is 93 dB, 2W is 96 dB, 4W is 99 dB, 8W is 102 dB, 16W is 105 dB and so on.  In comparison to a loudspeaker that has a sensitivity of 84 dB, you would require 128W of power to achieve a sound level of 105 dB.  It is also useful to remember that SPL is on a logarithmic scale, so every increase of 10 dB sounds about twice as loud to our ears.  What this translates into while speaker shopping is that a lower sensitivity loudspeaker will generally require higher powered amplifiers.  Owners of very low powered amplifiers like those based on single-ended triodes (SET) will pay a lot of attention to the sensitivity specification as they hunt for speakers with very high sensitivity.

Of all the loudspeaker specifications, the frequency response is the easiest one to take out of context.  The frequency response is used to describe the audible frequency range that a loudspeaker can reproduce.  Audio frequencies are measured in Hertz (Hz) and the theoretical range of human hearing is generally regarded as being from about 20 Hz (the very lowest bass tones) through 20 kHz (the very highest treble notes).  It may seem logical to presume that a loudspeaker capable of reproducing all or more than the audible frequency range would be best.  But this is not the case, so don’t fall into that trap.

To get a better indication of how a speaker will perform, you will need to look at Frequency Response plots, Cumulative Spectral Decay plots and Impulse Response plots.  You may be able to obtain these from the speaker manufacturer or find them as part of a speaker review. 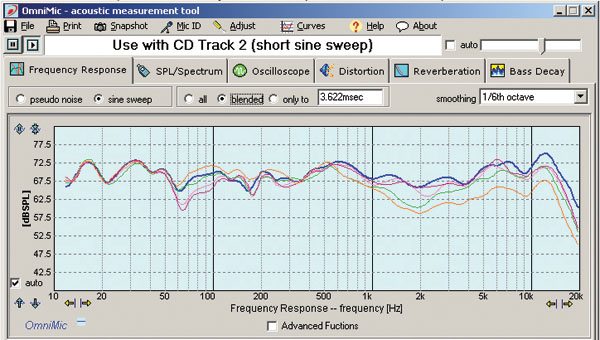 Figure 1: A Loudspeaker’s Frequency Response Chart (or a frequency vs. amplitude plot).

The frequency response plot however does not show the critical third dimension: time.  Examining plots that consider time will give us a visual indication of how a loudspeaker responds to a dynamic impulse.  For example, consider a loud thump from a kick drum.  When attempting to reproduce this thump the loudspeaker should start instantly and stop the very instant the kick drum stops making sound.  If the bass speaker continues to resonate and make sound after the thump has stopped, the loudspeaker is not accurately reproducing the thump by colouring the original sound.  The lower portion of figure 2 shows a typical measured impulse response.  The plot shows that some sound persists after the impulse input has stopped (i.e. the speakers resonate and “ring” after the impulse). 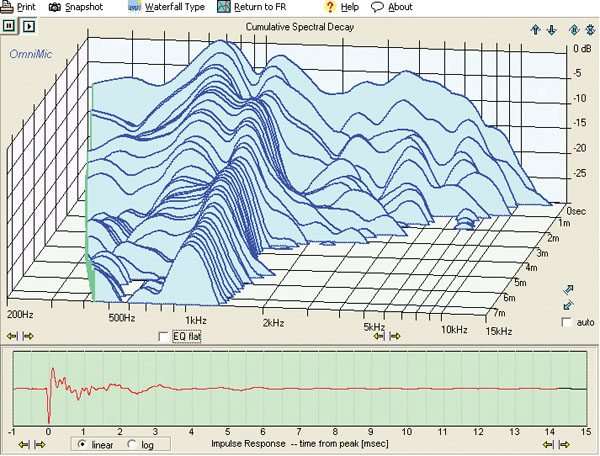 In order to get a visual representation to what extent and at what frequencies the loudspeaker “ringing” is occurring, a Cumulative Spectral Decay (CSD) plot which shows the measured response of a speaker in frequency, amplitude and time is used.  In the CSD waterfall plot the third axis is time, so the lines closest to you are measurements taken later in time than the lines further back into the plot.  The perfect CSD plot would look like a straight line at the back with no lines towards the front.  The CSD plot in the top part of Figure 2 shows that most of the resonance is occurring around 1 kHz.

Understanding how to read speak specifications is important and while the specifications can give you some general ideas about the loudspeaker, they alone cannot be used to gauge performance.  A frequency response plot could be more helpful, but it does not consider the critical element of time.  No matter how good you may be at interpreting loudspeaker data and CSD plots, this data was collected in a room free of reflective surfaces.  Thus one should not take specifications and measurements too seriously, but rather use them to assist when looking for a speaker.  I use the specifications and frequency response data to eliminate speakers that will obviously not be satisfactory for me.  Once those are out of the way then I can settle down to some careful auditioning and make an informed buying decision.