What’s a spider cone? It’s an important question, because it’s the principal upgrade in the new Symphony Edition of the Mozart Grand speakers ($3,500US) from Austria’s Vienna Acoustics. The Mozart Grand has two 6 inch drivers, both clear X3P designs, while the upgrade replaces the lower of these with the new spider cone. According to the company’s Patrick Butler:

“The Spider Cone design dramatically increases rigidity while maintaining an optimal balance between low moving mass, rigidity and inner damping. The Spider Cone was first designed for the original Beethoven Classic in 1996 as a solution to the problem of not being able to find the right bass driver. A series of radial and axial reinforcement ribs were added to our X3P cones with the design assistance of Finite Element Analysis. The net result is a lower noise-floor, improved dynamics and lower bass extension over the older Mozart Grand model. Additionally, the crossover is optimized to take advantage of the capabilities of the Spider Cone bass driver, which resulted in greater midrange clarity. There are also some minor changes in damping used inside of the cabinet. All for a $500 price premium over the outgoing Mozart Grand.”

Let’s look at the picture (below). 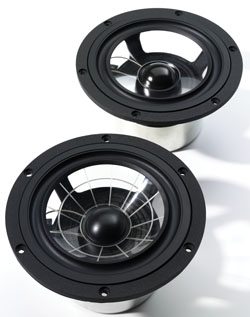 Let’s take a step back. Who are Vienna Acoustics, and where does the Mozart Grand Symphony Edition fit in their offerings? I first came across their speakers at CES 2004 at the Sumiko display in the Las Vegas Convention Center. The speakers were beautifully finished but of conventional design, in contrast to the Sonus Faber speakers also represented by Sumiko. Then one year the remarkable Vienna Acoustics “Music” speaker, the first in their Klimt series, made its debut and suddenly everyone was paying attention. Strikingly modern in design with its unusual drivers on prominent display, the sound quality was equally impressive. The spider cone technology was taken to a new level in the NAVI bass drivers and has surfaced now in the Concert Grand line. Klimt speakers are beyond the budgets of most music lovers, but it is good to see such high tech solutions trickling down to the more affordable part of the product range. Spider cones and regular X3P cones are cast in Austria and then sent to SEAS to build up into drivers.

From day one, Peter Gansterer has been the mastermind behind this operation. Vienna Acoustics’s first speakers were shown in 1989, while the original design work for the Mozart speakers dates back to 1993. Today the company offers three distinct ranges of speakers: the Klimt Series, the Concert Grand Series and the Schönberg Series.

So we see a wide range of speakers. What distinguishes this company from all others is the perfection of the cabinet work, which is executed by a furniture manufacturer in nearby Italy. No cheap thin veneers here. Vienna Acoustics specifies furniture grade materials and hand finishing using special techniques, and employs seven layers of varnish. The members of the Concert Grand Series all feature carefully curved narrow baffles to minimize early refection and edge diffraction. Very strict quality control standards are imposed all the way along the line, and each speaker’s crossover is selected to create a close acoustic match to the reference speaker of each design, accommodating small differences in measured tweeter performance. Consistency – it’s what made McDonalds so successful. It may not be the world’s best hamburger but it’s always going to taste the same. Small differences between two speakers can impair the imaging so the very tight tolerances imposed here are designed to guarantee you get what you’re paying for, and ensure that reliability is going to be high.

The Mozart Grand SE stands 97.2cm tall, 34.3cm deep but a mere 21.6cm wide (with spike assembly) and sits on a black metal frame with four adjustable spikes to couple it firmly to the floor. A Scan Speak silk dome tweeter (exclusive to Vienna Acoustics) sits near the top of the thick front baffle. If you have small children or pets you’ll probably want to keep the protective grills in place, because this excellent tweeter has many fine qualities but resilience to finger pokes is not one of them. Immediately below the tweeter sits the first of the two main drivers, exclusive to Vienna Acoustics, and featuring a transparent cone made of X3P material. X3P combines thermoplastic TPX with 3 polypropylene based synthetics to achieve maximum inner damping, ultra-low mass and precise control over cone density and rigidity. Working from a single pair of high quality gold and silver alloy coated binding posts and high quality twisted pair solid copper conductors, a 2.5 way crossover feeds the full bass/midrange signal to the middle driver while the lower driver concentrates on the lower frequencies only. In the earlier version of this speaker the lower driver was identical in construction to its partner but in the Symphony Edition the lower driver is the new spider cone design. Still made from X3P but with important gains in rigidity it is able to dig deeper in the bass at reduced levels of distortion.

With its fine woodwork and slim design the Mozart Grand SE in Cherry finish looked great in my listening room. Even my wife approved, and that doesn’t happen every day. Being a dual-ported design, it is naturally quite fussy about positioning. Patrick, who delivered the speakers to me, also spent an hour or more making fine adjustments until he found the optimal spot and angle for each speaker, and your Vienna Acoustics dealer will (I hope) do the same for you if you are unwilling to take the time to experiment. Once in place the powerful bass locked in and the wide dispersion characteristics of the tweeter in particular means you do not need to constrain yourself to a narrow sweet spot. With some speakers it’s the other way around – it may matter less where you put them but once in place, there’s just a two foot range best suited for listening. Well in my house, people move around and speakers stay still so the Mozart exhibits the right imaging characteristics!

I mentioned that the bass was powerful and along with that, the image stable and spacious. Now it was time for some serious listening. I used a variety of amps and sources to partner with the speakers, but the speaker cables, like all the cables in the system were Nordost Valhalla throughout.

From a speaker called the Mozart Grand Symphony Edition I was expecting it to sound at its best in large scale material. That was not what I found. It performed well enough in the big orchestral works but I found it reached its limits of resolution in the climactic moments and didn’t display the nimbleness in the deep bass that its big brothers in the Klimt series offer. But switch to chamber music or jazz and it’s a different story. It’s quite at home with Miles Davis, a perfect match for Ray Charles and entirely convincing in the Beethoven String Quartets. It’s partly a question of squeezing a quart out of pint pot. You can do it, in terms of bass response, by leveraging the characteristics of reflex porting to enhance the output of relatively small woofers, but there’s no free lunch. The volume and bandwidth of the bass performance may meet your objectives, but the level of control and the deep bass sonority itself takes a beating, noticeable mostly in fast moving orchestral passages.

The Pavel Haas Quartet’s recording of Dvorak String Quartets [Supraphon SU40382] won a lot of accolades last year, including Gramophone’s “Chamber Recording of the Year”, and it simply leaps from the Mozart Grand full of energy and passion. The imaging is excellent, the string tone rich and warm, while the dynamics are if anything a bit over the top, although you cannot blame the speakers for that.

I’m crazy about the sound of the Beatles “Love” album [EMIDA 79810] and find it a great disc for bringing out the strengths and weaknesses of the various components passing through. In this case I noted some sibilance in the vocals on the opening track and the bird calls fall lower in the mix than with the reference YG Carmel speakers, but the imaging is solid and three dimensional. At a small fraction of the price, you wouldn’t expect the same level of detail retrieval. The voices are less than ideally distinct but the sound is dynamic, musical and low in distortion. “Blackbird” is excellent – full in tone and quick footed. Paul’s singing of “Yesterday” is slightly shut in but ideally warm and clear. “While My Guitar Gently Weeps” fully resolves the guitar line but while the cello is rich it loses some volume and clarity in the deep bass.

I’ve just bought a new SACD recording of Bartok’s “Concerto for Orchestra” which is in the demonstration class on all counts [Hungariton HSACD 32187]. Some of the bite and tension in the upper strings is sacrificed here for a smooth treble presentation and the winds lack their full blown harmonics, both symptoms of a shy top end, but the midrange is very strong above a tuneful but slightly recessed bass. By contrast the superb 1957 mono recording of Coleman Hawkins “The Hawk Flies High” [Mobile Fidelity UDSACD2030] is much more comfortable ground for the Mozart Grand SE. Lots of low bass energy and a delicious rasp from the sax coupled with a slight step down in the level of the brushwork suit the recording well. The trumpet is very clear and concise with excellent colour while JJ Johnson’s trombone is deliciously well captured. There is a tremendous drive here and the rhythms dance along in a spritely fashion. Oscar Pettiford’s bass is particularly nimble although somewhat lacking in the deep fundamentals. Each instrument is presented clearly within a coherent whole. This is almost an ideal rendition and difficult to match in this price range.

Equally good is the complex track “Diamonds and Rust” from Joan Baez [Vanguard VCD3 125/7] who performed this again on her recent trip to Toronto. Reduced somewhat in level at both frequency extremes, the essence and impact of the music is well preserved and the track sounds delicious and infectiously musical. The strong imaging abilities of the Mozart Grand help sort out all the fine layers of detail here and elsewhere on this disc.

I enjoyed my time with this speaker. As long as you don’t push it out of its comfort zone by throwing Mahler’s “Symphony of a Thousand” at it, you will be rewarded with a fully fleshed out soundstage, competitive levels of resolution, a surprisingly full if not fully sorted bass, a sweet and slightly recessed treble in a beautifully put together chassis that will give credit to any living room. It’s fairly efficient and will match a wide range of amplifiers. I find it well priced and worthy of extended audition for the serious listener looking for the truth in music rather than a brilliant HiFi sound designed to impress the neighbours.