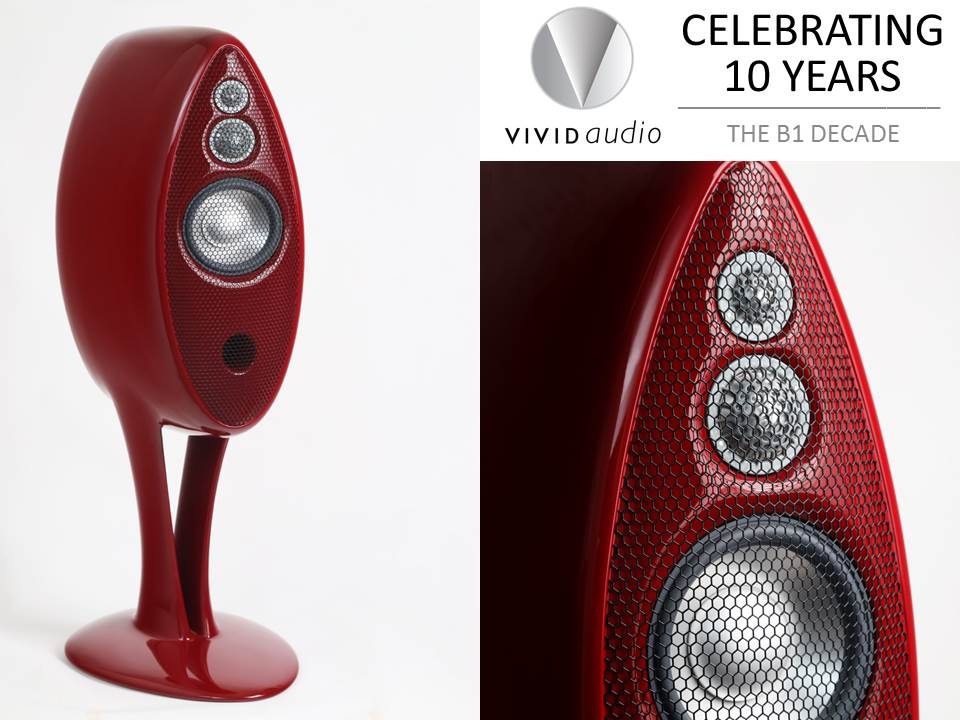 Vivid Audio has commemorated the ten years of production of their Oval B1 loudspeaker with the release of their new limited edition Oval B1 d(Decade) loudspeaker. The B1 Decade leverages technology from Vivid’s own Giya series, raising performance of the B1 to levels that have not previously been realized.

The 10th Anniversary limited edition Oval B1d includes many improvements over the original 2004 Oval B1 design, including:
1.Lightweight balsa-core, polymer-composite cabinet structure similar to the Giya series; with a much higher resonance frequency than that of the original B1’s carbon fiber reinforced, plastic cement cabinet
2.Woofers are a fresh design where the motor assembly has been pushed forward to encapsulate the voice coil, reducing flux leakage considerably, leading to greater woofer efficiency
3.With the new bass/mid woofers, Laurence Dickie has improved the crossover to better attenuate the output from the rear driver above the 100Hz lower crossover point
4.New tweeter grills were designed to protect the individual catenary domes
5.A magnetically attached grill, similar to that used in the Giya series is now offered for this new B1 Decade

The limited edition Vivid Audio Oval B1d will retail for $28,000 U.S./pair in piano black or Ferrari corsa red. Production of the Oval B1d will be limited to just 200 units worldwide, while production of the existing Ova B1 will continue at the same MSRP of: $17,000 U.S./pair. Look for more details to be shared on this and other Vivid Audio products at: http://vividaudio.com