4K Resolution: The Next Evolution of Video 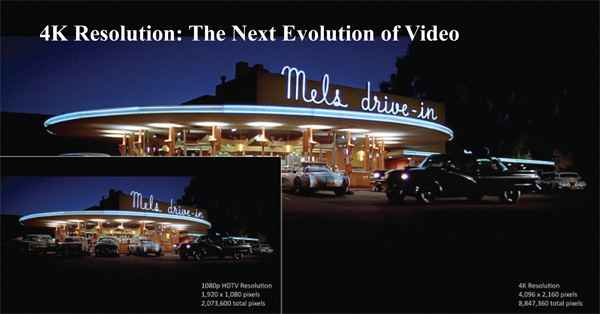 HDTVs are an integral part of many consumers’ homes and with the recent switch to digital over-the-air broadcasting in Canada, back in September of 2011, many consumers now have access to free, high definition content (1080i) without needing to go through a satellite or cable provider. Thanks to the ever-decreasing price of HDTVs, coupled with the proliferation of high definition content via Blu-ray as well as online services such as the iTunes Store and Netflix, many consumers have ditched their standard definition displays and upgraded to 720p and 1080p capable sets to take advantage of all this crystal clear content.

As with most technology, things don’t stay the same for long and manufacturers have already started incorporating the next high(er) definition format into their offerings: 4K resolution. This new designation refers to vertical lines of resolution as opposed to horizontal lines as with previous designations (720p and 1080p refer to horizontal lines of resolution). This is due to all the different aspect ratios that each studio utilizes for their content (e.g. 16:9, 22:9) so instead of the varying lines of horizontal resolution, 4K refers to the fixed 4,096 lines of vertical resolution. When multiplied by the various horizontal resolutions, this gives more than four times the current pixels of today’s 1080p displays: 1080p displays contain 1,920 x 1,080 = 2,073,600 pixels; 4K displays contain up to 12,746,752 pixels (4,096 x 3,112).

First, a primer on resolutions and why 720p and 1080p are “high definition” as opposed to previous standard definition formats. While there are different methodologies and numbers thrown around, the general consensus is that to be “high definition” the screen must show an image where individual pixels are indistinguishable by the human eye (at an appropriate viewing distance). The average human being has 20/20 vision meaning that from 20’/6.09m away, they can read letters approximately 0.35”/8.8mm tall on an eye chart. Translating this to HDTVs, the required resolution to produce pixels that are small enough to be indistinguishable varies depending on the distance a viewer is seated from the HDTV as well as its size. At a viewing distance of 8’/2.4m, the average person cannot distinguish between pixels that are smaller than 0.065”/1.65mm.  This means that for displays 50” or smaller, 720p resolution is indistinguishable from 1080p resolution. Typically consumers are advised to sit at a viewing distance that is approximately 1.5 to 2.5 times the diagonal measurement of their screen. For example, for a 50” display, consumers would sit 75-125”/1.9-3.2m away. This is to prevent eye strain from the flickering image as well as to fill enough of the viewer’s field of vision with the image.  Higher resolutions only become necessary if viewers want to sit closer to their televisions or have larger screens (which have larger pixels). This limit to visual acuity can actually save consumers money since they don’t have to purchase a more expensive 1080p HDTV if an equivalent 720p set is available (for sizes smaller than 50” or viewers who prefer further viewing distances). 4K resolution will allow consumers to purchase smaller television sets while simultaneously sitting closer to the screen and still maintain the crystal clear image that many of us have become accustomed to.

As with any new format, there are both upsides and downsides. The most obvious downside is the need for a new 4K display. Initially, these television sets will command a premium over similarly sized 1080p displays but as always, the price difference will shrink as time progresses. Toshiba, LG and Sony have already shown off prototypes as well as production models (destined for Asia) in sizes ranging from 55” up to 84”, with both 2D and glasses-free 3D capabilities.

Sony and JVC have also both released 4K projectors for the home, allowing well-heeled consumers to bring the 4K movie theatre experience home. Sony’s VPL-VW1000ES 4K 3D-capable home projector has an MSRP of $25,000 USD, accepts all current 4K formats (except 4K 3D) and will upscale any non-4K content to 4K (including 1080p 3D). At CES 2012, Sony stated that over 10,000 movie theatres worldwide are utilizing their commercial 4K projectors and the number is increasing daily.

Fortunately, for some consumers, the only component they will need to upgrade to enjoy 4K content is their TV because much of their existing 1080p components may already support the new format. Any device that supports the latest HDMI v1.4 specification is already capable of either processing or at least passing through 4K resolution signals. This includes everything from HDMI cables to Blu-ray players to AV receivers. For example, Onkyo’s TX-NR809 receiver, which was released back in Q2 of 2011, includes a Marvell Qdeo video processor to upscale existing content to 4K and other manufacturers have also been quietly building in 4K support in anticipation for the upcoming format. When Sony announced the release of its 4K home projector, it also stated that the PlayStation 3 will be receiving a firmware update in the coming months to support output of 4K still images. YouTube also already supports 4K video files.

4K brings another advantage but this one won’t have immediate, discernible effects for consumers in the short term: movie studios won’t have to spend time and money downscaling or reformatting movie theatre content (much of which is already shot in 4K). This should eventually make its way to consumers via faster and hopefully cheaper Blu-ray releases. To get all this 4K content to consumers, physical media will be the only timely option due to the vast sizes of 4K content (up to 4x current 1080p content). Sony has been in talks with the Blu-ray Disc Association to finalize a standard for compressing and storing 4K content and hopes to be able to release the next Spider-man movie on disc in 4K (due out summer 2012). The existing Blu-ray format already supports up to 50GB on each side (dual layer) and the upcoming BD-XL format supports up to 128 GB on each side (quadruple layer) – though this disc format isn’t compatible with existing Blu-ray players.

For all the consumers who will complain about the inevitable re-release of titles, 4K resolution will likely be the last format for much of our existing content. A 4K scan of 35mm film (what 95% of movies are/were filmed on) will max out the resolution of the medium and any higher resolution will be superfluous. The only exceptions to this are IMAX and 70mm films, which would require an 8K resolution scan to fully capture the negative. (Less than 1% of movies are filmed in IMAX and 70mm film was discontinued in the 80s.)

4K is the unifying video format that will erase the line between what is shown in movie theatres and what is available in the home (eventually). It will allow users to purchase smaller screens with higher resolution for use in tighter spaces while hopefully ending the video format evolution for the foreseeable future.