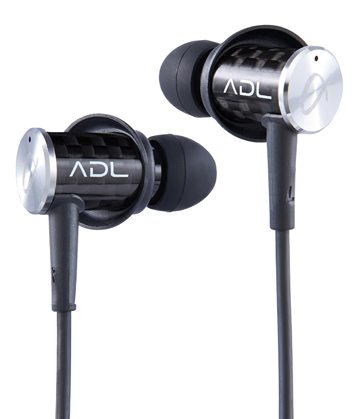 Headphones and earphones are all the rage these days when it comes to music listening. They are compact, portable, relatively cheap and with many models – truly a fashion statement. Alpha Design Labs (ADL) by Furutech has been joining the many other manufacturers in the portable audio space with a few recent products – their H118 headphone, as well as their X1 DAC / portable headphone amplifier (both recently reviewed by yours truly; you can find the reviews on novo.press). ADL’s latest product in the mobile audio category is their first in-ear-monitor / earphone namely, the ADL EH008.

A prototype of the ADL EH008 was seen lurking at a couple audio/video shows in 2013, including the Toronto Audio Video Entertainment Show (TAVES) but the ADL EH008 has only recently been officially released. I received the review set of the EH008 in late May and have been using it virtually daily since.

The ADL EH008 came packaged in a windowed cardboard box and inside I found a luxurious, handsomely styled leatherette semi-hard case. The zippered case was black and had a triangular form with all edges rounded. Within this case were the earphones nestled in a removable rubber insert that allowed for easy stowing of the cable. Both the case and the rubber insert were tastefully emblazoned with the ADL logo. The executive-like travel case only helped to showcase the lovely styling of the EH008 earphones within. The EH008 utilizes a carbon fiber outer shell that is very eye-catching under good light. On the back end of the earphone body was an aluminum end plate, adorned with the ADL insignia. This silver end plate starkly contrasted with the dark carbon fiber enclosure, providing a very sophisticated overall appearance. A unique rubber outer seal ring surrounded the body at its mid-way point and the cord was sheathed in black rubber. Overall, I found the ADL EH008 chic and fashionable, which I’m sure will have wide-appeal.

Three sets of rubber tips were provided, which was sufficient to find a good fit. The EH008 went in easy and stayed put and comfort was very good – enough to forget I was wearing them. Though the outer seal ring was designed for comfort and improved isolation, I found their silicon slip covers a bit of a pain, as they tended to roll off with every use. I felt myself tempted to reach for some crazy glue but for the record, no glue was used during the course of this review. The cord was of optimal length and its angled plug worked well. The cord’s springy rubberized nature prevented any tangles whatsoever; however, their springy nature seemed to add additional cable noise microphonics, when in motion. I tried wrapping the cables around and over my ears in a sports position to reduce the noise but the springy cables quickly rejected my attempts. Holding the cables to my chest as I walked was the only solution I came up with – so those intending to use these when exercising should take note.

These earphones utilize two drivers within each enclosure, what ADL refers to as Dual Dynamic Drivers. These drivers are α (Alpha – Cryo treated) with an 8mm driver for mid-to-low frequencies and a 5.8mm driver for high frequencies. The 5.8mm driver uses a Titanium Trembler Film for greater resolution. The body of the EH008 is made of two housings – an inner ABS resin and an outer carbon fiber shell that ensures optimal damping characteristics. The end plates on the earphones are of diamond cut aluminum and the cord is 1.3 metres in length with a 24k gold-plated stereo 3.5mm angled plug. This composition serves to deliver the following specifications: a sensitivity of 100 ± 3 dB SPL (130mW input at 1 KHz ); a frequency response of 20Hz to 20kHz; power handling of 2mW to 5mW; impedance of 19 ohms @ 1kHz and a weight of 15g.

My evaluation was done using my iPod touch as well as my iPad, playing lossless files and with the aid of an ADL X1 24/192 DAC / headphone amplifier. I found that even though the EH008 earphones have a respectable sensitivity of 100 dB, they did demand some power to sound their best and the X1 was the perfect companion.

Listening to Ray Montford’s album “Shed Your Skin”, I was impressed by the way the EH008 rendered the opening acoustic guitar lick of the tune Ice House. There came a sense of natural textures and definition, with plucks delivered clearly but in a fulsome manner. Distinct was the EH008’s ability to convey richness in tone and accompany that with a healthy measure of detail retrieval. I might say that this track sounded rather delicious through the EH008. Woody tones from the guitar were accompanied by substantial bass weight and instrument separation, as well as an appreciable sense of imagery. I found myself listening to this track over and over again to get the full sense of all the EH008 had to offer.

Moving over to the title track of Sade’s “Soldier of Love” album the opening wind noise was immersive, if not as open and transparent as I’ve heard it through my substantially more expensive Shure SE535 earphones ($569). The bass notes and drum beats were full and weighty, intense without being overpowering – there was no bombastic character here. Sade’s voice and the overall sonic signature on this track did lean a touch to the darker side of neutral, giving a slightly warmer expression to the music that was satisfying in its own right. I perceived some surrendering of ultimate openness and precision; however, the listening experience itself remained very engaging and pleasurable. I was definitely given the impression that the EH008 were cut of a similar cloth as the ADL H118 headphones that are currently one of my own reference sets of cans. Given the varying quality of recordings these days, especially those of the pop genre, having a little extra warmth is often welcome – providing some forgiveness and avoiding such recordings coming across as thin or manufactured.

Over to a mega-classic album from Miles Davis, ‘Kind of Blue’ and the last track Flamenco Sketches (Alternate Take). If you didn’t know, this is the all-time best selling jazz album and if you haven’t heard it – there is no better time than now to get yourself a hi-resolution copy. I put the ADL EH008 head-to-head against my B&W C5 and Shure SE535 reference earphones. Listening to the upright bass, the EH008 delivered the instrument in a very full, deep and resonant manner; by comparison, the C5 was tighter, lighter and more dynamic with the plucks, though less revealing of the string texture and body resonance. Going over to the SE535 there was noticeably less bass weight than both the EH008 and C5, though everything was more resolved, and more open with greater sustain. Listening to the piano, the EH008 was tuneful, natural and textured and preserved the glow of the woody body of the instrument. With the B&W C5, the piano was somewhat simplistic, sounding lighter and having less reverb, while through the Shure SE535 the clarity of the piano notes rose to a higher level, taking on its own space and bringing with it a bounty of detail. Moving to the percussion, the EH008 provided a more detailed and revealing rendition of brushwork than the C5 with cymbals that were subdued but feathery, the C5 sounding rather simplistic in comparison, while the SE535 provided the greatest insight into the strokes, motions and textures. Miles’ trumpet with the ADL EH008, though short of the SE535 in ultimate transparency, openness, dynamics and detail, did a wonderful job of embodying this instrument with its brassy warmth and inherent bite. And, unlike the C5, the EH008 provided the brassy texture of the instrument and its throat tones. This went also for the saxophone, where the EH008 conveyed the instrument with authoritative beauty, sounding full, rich and lush – a captivating experience. In all of this the EH008 was able to bring across the emotion of the song, the relaxed melancholy that has given me such a love for the piece.

To sum it up, I’d call the ADL EH008 a success. Overall, I felt it brought more life to the music and more involvement to the listening then the B&W C5, and even in comparison to the Shure SE535, it was not embarrassed. In fact, those seeking a fuller, more forgiving and richer take on recordings may prefer the ADL EH008 to the much pricier Shure SE535. Given their price, and factoring in their level of performance, style and construction, the ADL EH008 is a very competitive product. If you seek an emotional connection with your music and like it delivered with a little heartiness, wrapped up in a stylish package, the ADL EH008 should not be overlooked.