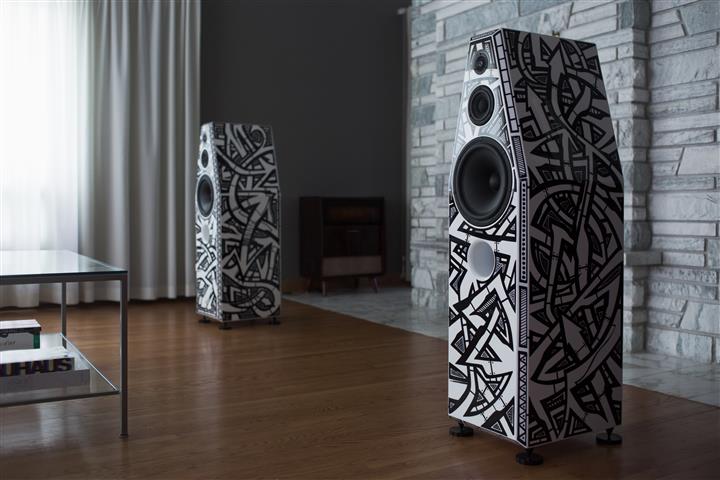 I just can’t help admiring high-end audio manufacturers who are bold and daring enough to go against conventional wisdom when designing their gear. In some cases, moving out of their comfort zone and into the great unknown is prompted by a healthy dose of confidence in their own ability. In other cases it is just a sense of adventure to see what lies in unexplored territory. In a few cases it happens mainly because they do not know any better. However, every once in a while I come upon a manufacturer with a penchant to push the envelope simply because they have a passion for music and so they make it their life quest to develop audio components that take audiophiles a step closer to the holy grail of reproducing the live performance with absolute fidelity. Pierre Murray and Eric Barry of Montreal-based ArtVibes Audio struck me as belonging to this ilk.

Both Pierre and Eric are musicians who have a dream of exploring the endless adventures that lie in the infinite universe of music and sound. As musicians, they developed a deep respect for this aural art form, which plays such a huge part in making life worth living for humankind. Being around live music so much, also gives them a very special insight into the differences between the incredible glory of live music and the facsimile of reproduced music. This was the genesis of their motivation to try and narrow that gap.

Their intrepid quest started fifteen years ago with the goal of designing and building a loudspeaker that would go beyond what would please most audiophiles to what would please most musicians as well. Knowing that this is indeed a formidable challenge, Pierre and Eric commenced this mission determined to put in whatever it would take to meet it in terms of time and money. Over the past decade, thousands of man-hours and considerable funds were employed and the result was the first DS-1 loudspeaker system (2013) followed by the DaVinci that’s reviewed here.

Based on their experience as musicians, they were convinced that generating the desired quality of bass could only be achieved by employing a woofer that moved a considerable amount of air. They tried all the best 6-inch, 8-inch and 10-inch woofers and concluded that the latter is the minimum size required to deliver bass that the listener would not just hear but also feel in their gut, the way one experiences at a live performance. They also put a lot of emphasis on ensuring that the bass would integrate seamlessly into the rest of the audible frequencies to achieve perfect sonic balance.

Once the size of the woofer was decided, the next step was to determine the woofer cone material. Here they found that the rigidity, stiffness and damping qualities that they were looking for could be found in the good old paper cone woofers so that is what they picked over the more exotic materials like carbon fiber and Kevlar. After testing many transducers, they finally settled on the ScanSpeak model because of its highly rigid cone, which mimics the movement of a piston over a wider frequency range. This driver unit houses a symmetrical drive device, which optimizes linearity of the frequency response while maintaining a lower distortion rate. The extended range had the added advantage of alleviating the load on the midrange driver unit so as to help both units to perform optimally. This choice of woofer, to their ears, provided a natural and organic quality to the sound while revealing all the subtleties and nuances all the way down to 20 Hertz.

Once they firmed up on the choice of woofer, the selection process was repeated to determine the best mid-range and tweeter that would dance well with the woofer. For the tweeter, they chose a high-definition, high-velocity 1-inch soft ring dome driver, also from ScanSpeak. They found that his unit increased the efficiency, response and accuracy in the critical high frequency range. They liked the fact that the large-roll surround and textile dome diaphragm delivered a relatively flat frequency response to a little above 30 kHz, which is well above the audible frequency spectrum. The bonus was the truly outstanding off-axis dispersion that this tweeter delivers. They also liked the die cast aluminum faceplates, which combined superior mechanical stability with great aesthetics.

Next up was the choice of the midrange driver unit and no effort was spared to get this decision right. As the late great Justin Gordon Holt famously said, “If the midrange is not right, nothing else matters”. After seemingly endless trial and error, the driver that got the nod was a sliced paper cone unit, also from ScanSpeak, which allows for a significant reduction of the cone break-up effect (i.e. the peaks and drops that appear on the frequency curve when the cone surface enters various ringing modes). To help this driver unit perform at its best it was decided that it be mounted into its own housing. This worked well as it allowed the midrange driver to deliver a clearer sound that better matched the tonal qualities of the tweeter and woofer that already made the cut.

With all three drivers selected, it was then time to determine the cable for the internal wiring as well as the crossover network to help the three transducers work together, hopefully, like a world champion synchronized swimming team. During this long drawn out process, Pierre concluded that what is more important than the quality of the parts used, is the synergy between the parts. This prompted him and his team to experiment extensively with various permutations and combinations of connectors, capacitors, resistors, binding posts and solders until they got a combination that satisfied their very discriminating musician ears.

They settled on a passive crossover that incorporated a second order Linkwitz-Riley filter with Zobel compensation. It has been optimized based on the response, impedance and phase curves of the three drivers. The components used are from Solen Electronique Inc., including AGM’s Silver Metalized Polypropylene Capacitors, AcrhOhmiC military-grade non-inductive resistors and Perfect Lay Hepta-Litz inductors. For the internal wiring they experimented with various types of material including solid core and stranded copper as well as silver wires before settling on Teflon silver-coated copper cables, the same type that is used at NASA.

They then worked with a speaker engineer and designer, providing him with a set of criteria based on which various options were considered before choosing a floor standing, semi-pyramidal design. This design was engineered for better attenuation of the reflections coming from the surface close to the drivers and to minimize baffle diffraction loss. Departing from the general trend to use MDF or some exotic material, the ArtVibes Audio team instead opted to go for Russian Plywood for the cabinet material. In deference to the importance of the role of the front baffle and its role in keeping a vice-like grip on the driver units especially during extreme cone excursions, this speaker has been given a front baffle that is a chunky 38.1mm thick.

This design was then submitted to a highly reputed cabinet maker that turned the drawing into a real world speaker enclosure. Pierre and his team were determined to make the speaker look as good as it sounded and so, to provide the livery for the speakers, they employed the services of a painter who specializes in painting Lamborghinis. Although they were very pleased with the Lamborgini quality finish, the ArtVibes team decided to go one step further. Being ardent art lovers they decided to give their customers an option that no other speaker manufacturer in the world has hitherto offered. They decided to combine art with the sound of music by offering their speakers with the exterior painted by a choice of four well-known, highly revered artists.

I must say that this is a very astute move because every time you decide to treat your ears to the exceptional sonic attributes of this speaker, you can also indulge your eyes with the beauty of the art that cloak the speaker cabinets; truly a treat for the senses. Additionally, this strategy makes each ArtVibes speaker a true one-of-a-kind.

The original speaker had the crossover network mounted in a separate enclosure on the back of the speaker to isolate it from the vibrations generated by the driver units. However to keep the tag artwork pristine, for this special edition model they installed the crossover network inside the speaker but still in a separate compartment. As one final tweak on the special edition model, the ArtVibes Audio team replaced the original ScanSpeak Classic woofer with the ScanSpeak Revelator woofer of the same size.

Pierre and Eric drove down from Montreal to deliver and set up the speakers in my auditioning facility. Each speaker was packed in its own crate equipped with castors that helped move these heavy (55 kilos each) behemoths. Uncrating the speakers and installing the spiked feet and pucks was quite straightforward.

With the spiked feet and pucks, the speakers stand at 1218 mm tall with a width of 345 mm and a depth of 433 mm. The introductory retail price for the DaVinci Special Edition is $26,999 and it comes with a 10-year warranty against manufacturing defects.

For this review I used tracks from the TIDAL streaming service and played it through the “Amarra for TIDAL” interface. This is a great review tool as the choice of music is almost limitless which allows you to select the exact music that you require during the review process. It is like having a toolbox with a virtually unlimited set of tools for every application possible. The quality of the sound via TIDAL is excellent for most music recorded and mastered over the past 25 years. Running TIDAL through Amarra, kicked up the sound quality a notch. If you listen to TIDAL through a true high-end audio system, it would behoove you to run it through Amarra to optimize the sonic performance of this streaming service.