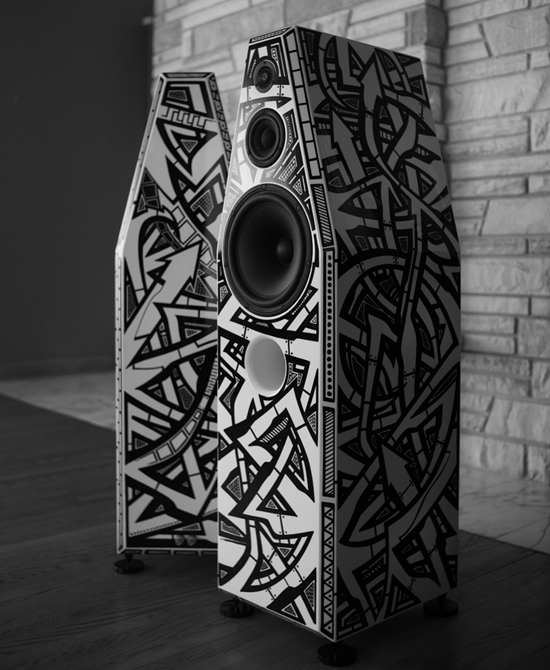 Sound quality of the music streamed by TIDAL that is older than 25 years is very dependent on the quality of the original recording. It ranged from excellent for Etta James tracks recorded by Leonard Chess at Chess Records, to fairly sketchy for very old tracks by Louis Armstrong and Slim Whitman. The TIDAL interface is well planned and very easy to navigate but the Amarra for TIDAL interface goes one better, giving it a more sophisticated look and the convenience of meters to let you monitor the audio signal strength levels.

I tried out the DaVinci speaker with various combinations of preamps, amps and cables. These speakers are ruthlessly revealing of any weakness in other components and so I recommend trying them with different components. Of all the components that I had on hand, they performed the best with a Bryston BP26 preamp, a pair of Pass Labs XA100.8 monoblock amps and Skogrand Beethoven cables.

Speakers that are sent to me for review are all subjected to a fair amount of what the Americans prefer to call “enhanced interrogation”. They are pushed close to their limits so that if they have any weaknesses, the process will reveal them warts and all. It is quite rare for any speaker to come out of this inquisition totally unscathed. The DaVinci was no exception. I began the audition with “Keith Don’t Go” by Nils Lofgren. Right from the get go, the DaVinci made it known that it is indeed quite a special pair of speakers. This is a very robust live performance track with a lot of energy and challenging leading edges as Nils pounds on his guitar with no mercy. Even at reasonably high volume levels the DaVinci delivered this performance with uncommon ease, with nary a hint of strain or distress. This is a quality that manifested itself throughout the audition. No matter what I threw at these speakers, they took it in stride without breaking a sweat.

My bass torture track “Willow weep for me” with Ray Brown on bass guitar has made even some obscenely priced speakers cry out in pain. The DaVinci is one of the very few speakers in its price range that simply shrugged it off as just another day at the office. Try as I might, I just could not make the woofers lose control under normal listening conditions. Given this impressive bass performance, I tried mating the DaVinci with a pair of JL Audio f112 sub woofers to see if they made any difference to the bottom end performance. On most tracks, the difference was subtle at best. However with tracks dominated by organ music like Lindenkirche Berlin by Gerhard Oppelt, there was a distinct addition of authority, weight and tunefulness to the lowest notes in the audible frequency spectrum. If you are not a fan of organ-heavy music and if your music library does not contain tracks with oodles of passages containing bottom octave sounds, the DaVinci will probably satisfy your craving for deep and tuneful bass without the addition of subwoofers.

Moving on to “The Trinity Sessions” album by the Cowboy Junkies tested the DaVinci’s abilities in the crucial midrange area where most of the music resides. Many of the more popular musical instruments have their lower harmonics in the midrange and the human ear is most sensitive to the midrange frequencies approximately between 700 Hz and 2.7 khz. The fact that the DaVinci is able to deliver the tracks on this album with that rare “you are there” feeling, does indicate that the designers have got a lot of things right. This album was recorded in 1987, in the Church of the Holy Trinity in Toronto, Ontario. What makes it unusual is that it was recorded with the members of this band circled around a single microphone. This distinctive configuration captured the natural reverb ambience of the church with incredible presence.

The Cowboy Junkies started off by recording the songs that required the fewest instruments and then progressed to more complex arrangements. This allowed them to resolve acoustical problems one at a time so as to better balance Margo Timmins’ hauntingly husky yet delicate voice against the electrical guitars and drums. All this attention to detail gave this album a very distinctive sound and makes it a great album to test the midrange credentials of a speaker. Not many speakers are capable of delivering this palpable presence with the eerie realism that the DaVinci does. I was also impressed with the way these speakers capture the ambience of the church. Also noteworthy is the way these speakers portray the size of each musical instrument. Good speakers allow you to picture the instrument size with great accuracy and in this regard the DaVinci did not disappoint.

It was then time to test the way these speakers delivered the high frequencies. This is the part of the audible frequency spectrum that separates the fair speakers from the good ones. It is challenging to design a speaker that delivers the treble part of the music in a way that not only pleases the ear, but also does not contribute to listening fatigue. I am amazed at the number of speakers that err on the sweet side of natural when delivering the high notes. The extra sweetness may sound very seductive at first, but over longer auditioning sessions will sound artificial and fatiguing. For this task I listened to Shivkumar Sharma’s “Feelings” album. Shivkumar is arguably the world’s best santoor player and his lightning fast movements striking the strings of the santoor, present quite a challenge to any speaker. Having been in the audience of many of Shivkumar’s concerts I have a great reference of what the santoor sounds like in a live setting and only a handful of the hundreds of speakers I have reviewed came even close to matching the tonality, attack and decay of a santoor as it is heard at a live performance.

The fact that the DaVinci reproduced the santoor as accurately as it did does indicate that it has one of the better implementations of the ScanSpeak 1-inch soft ring dome tweeter. The extra wide dispersion of this driver unit results in an unusually wide sweet spot with very little tonal variation in the music when you move around the room. I could not detect any bright, brittle or edgy character to the sound nor was it sterile or clinical in any way. It has just the right amount of sweetness combined with silky smoothness that is easy on the ears even over long listening sessions.

The way that the three drivers of this speaker work so well together does point to a well-designed crossover. The imaging was exceptionally good for such a large speaker. The sound stage is quite wide and incredibly deep. The air around the instruments is good but at this price point I have heard speakers with a smidgen more in this regard.

The DaVinci is one of the more complete speakers I have heard at this price point. It delivers a sonic performance that should please most audiophiles irrespective of the genres of music that they listen to. As I mentioned before, they are very picky as to which components they play nice with so do a lot of due diligence on this front when considering them.

The ArtVibes speakers adorned by established artists makes for a great conversation piece to be sure. It also helps them stand out from other speakers, especially at audio shows. Look at it this way; you are not only getting a good pair of speakers but you are also getting a one of a kind work of art and if you are into that sort of thing, it is a huge plus point in favour of the DaVinci.