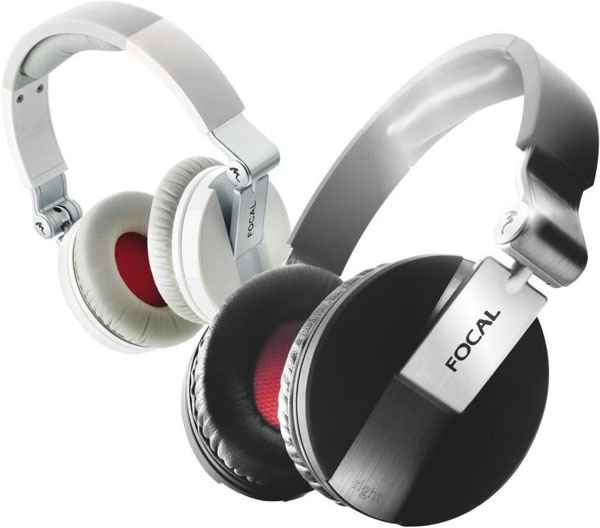 Focal is a consumer and professional audio product company.  It is the largest loudspeaker company in France, producing both finished loudspeakers as well as manufacturing loudspeaker drivers.  The company has been in operation since 1979.  In its 30 plus years of existence the company has produced a bounty of loudspeaker and audio products, including its current flagship $190,000 US Grande Utopia EM loudspeaker.  Given this heritage, when I got word that Focal was going to enter the headphone market, I was no less than enthusiastic to get the details.  How would Focal’s knowledge, experience and expertise manifest itself in a hi-fi headphone product?  Enter the Focal Spirit One hi-fi mobile headphone.

The Spirit One is the result of two years of research and development on the part of Focal.  It is the company’s first foray into the very competitive headphone market and is just the start of more to come.  Focal reportedly intends to introduce higher-end audiophile and pro-audio models, to its Hi-Fi Headphone line in the future.  In the meantime, we have the Spirit One mobile headphone.  Would the Spirit One headphone convey “the Spirit of Sound” that Focal professes its products embody?  Well, with its arrival at my door, I was definitely eager to find out.

Just one look at the Spirit One, and I think that most would agree, Focal has created a distinctive looking headphone product.  The Spirit One carries a handsome, progressive and upscale appearance that makes for a unique fashion statement.  The overall styling leans to the masculine, while very successfully integrating stylistic lines, materials and textures, including: brushed aluminum; silver accents; suede-textured rubberized plastic; a robust headband with hefty hinge assemblies and butter-soft leatherette skull and ear pads.  Two colour schemes are offered – black with silver trim and white with grey and silver accents.  With either, Focal provides just a tease of colour, red in both cases, concealed within the ear cups.  Maybe it’s just me but I thought the red might be a go at the risqué – like red lingerie for the ears…  Both the black and white are distinctive and tasteful, yet I’d expect that more men will go for the black, given its austere appearance, while women will lean to the white, for a friskier façade.

Going from aesthetics to engineering, it’s hard to not be fascinated with the intricate matrix of parts that go into a set of Spirit One headphones, as seen in the exploded image on this page.  Such engineering is not commonplace and requires access to engineers, tools, software and knowledge – all things that a company such as Focal has at its disposal.  Though all of the design, as I understand it, took place in France, the actual product is made in China.  Getting into the specifics – the Spirit One uses 40 mm mylar/titanium dome diaphragms, has a 32 ohm nominal impedance and a sensitivity of 104 dB/1 mW/1 kHz.  This makes the Spirit One easy to power, even with low output mobile devices such as iPhones or iPads.  The frequency response, especially impressive on the low-end, is stated from 6 Hz to 22 kHz.  The headphone cable is a 1.2 metre anti-tangle fabric sheathed OFC construction with an in-line three-button smart device remote and mic.  At each end of the cable are gold plated mini-plugs (3.5 mm) that have an aluminum casing emblazoned with the Focal name – kudos to the marketing team.  This cable allows for easy replacement or upgrade.  The in-line remote control allows for calls to be picked-up or ended, volume adjustment, pause and forward/back skipping of songs.  It is designed to be fully compatible with most Apple iDevices, including the iPhone 5 and iPad 3, with varying compatibility with other smart devices.  The ear cups use two-point hinges that allow them to fold-in or swivel 90 degrees for flat storage.  In addition, an aluminum frame combined with plastic pieces provides strength, flexibility and lightweight, at just 225 grams.

The Spirit Ones employ a closed-back circumaural design, which means that the ear cups are meant to sit directly against the skull, completely encircling the ears.  This together with the firm spring hold of the headphones yields an ambient noise reduction of up to 20 dB.  However, since the concave of the ear cups measure just 4 cm (wide) x 5 cm (high), I expect a true circumaural fit will be difficult for most – this was my experience, even with my relatively small ears (3.5 cm by 6.5 cm).  Still, overall, I found that the isolation provided was more than adequate for most situations – including riding public transit or walking in a shopping mall. With leatherette, as soft as a baby’s bottom, covering the articulating and spongy ear cups, I expected the fit to be comfortable but I soon found out the Spirit One grips like a Venus Fly Trap – taking some getting-used-to.  That said, it wasn’t long before I grew to find them very comfortable, even for extended listening.

I should mention that during the tail end of my evaluation, the Spirit One began emitting distortion from the right ear piece.  The Canadian distributor, Plurison, very quickly replaced the set, allowing me to complete this review.  Such unexpected things do happen but it gives comfort that Focal offers a two-year manufacturer parts and labour warranty on the Spirit One, which is double the usual length for headphones.

For my listening sessions, I used the Spirit One with my iPad, while on the move and with my Grant Fidelity DAC-09 headphone amp, when at home.  I also took the time to compare the Spirit One to my resident Grado SR80 open-back cans.  Much like other headphones, out-of-the-box, the Spirit One sounded a bit constrained and dark.  A bit of break-in time resulted in noticeable improvements, including better tonal balance, increased macro/micro dynamics, higher sensitivity and greater detail retrieval.  It took just about 50 hours for them to begin to really strut, with more subtle improvements over the next 25 to 50 hours.

Melody Gardot is one of my favorite contemporary music artists and her albums get a fair bit of play in my house.  Her latest album The Absence, is a new musical direction for her.  Influenced by her extended travels from the deserts of Morocco to Lisboa, to Buenos Aires and other exotic destinations, she has successfully fused these elements into her bluesy jazz.  The Absence is a beautiful sounding album, with lovely arrangements and melodies.  When I listened to the track Amalia, on the Spirit One, Melody’s voice imbued natural warmth with her trademark inflections nuanced and present – yet, relaxed.  The bass, though bountiful was tight and defined with string plucks remaining distinct and resonant.  Guitar plucks, communicated both the body as well as the string reverberations in a convincing way.  I found symbol strikes had a feathery shimmer, though perhaps a touch soft in expression.  In this tune, a shaker is heard and the Spirit One not only depicted it with its characteristic rasp but also making the granules moving within evident.  On the track, So Long, I couldn’t help but notice the lifelike hollowness in which popping sounds were delivered.  Melody’s sombre tone came across in a manner that gently drew me into the emotion of the song.  On the tonal side, xylophone percussion delivered characteristic variations in woody tones.  There was a stark difference in presentation with my Grado on these tracks.  The Grado brought across a comparable amount of detail but sounded lighter and livelier.  The bass was detailed but weak in comparison, lacking body and Melody’s voice sounded a little too chiseled, missing warmth and a level of humanness.  Quite surprising was the fact that the Grado, in spite of being open-back, didn’t give a sense of any greater space than the Sprit One – not an insignificant achievement on the part of the Focal cans.  That said, the Grado did outperform the Spirit One in providing a sense of air around instruments and in transparency but at the cost of warmth, body and fullness.

Moving from jazz over to progressive rock – I listened to the British band Elbow and their album Build A Rocket Boys!  On the track Lippy Kids, the opening repetitive single keyboard note was provided with a rich bloom and good impact.  Guy Garvey’s whistle was convincing, sounding a fair bit back, with the reflection of the recording venue coming through and giving a sense of space.  The bass line was solid, warm, yet taught.  My headphone amplifier tended to give the Spirit One a little more than neutral bass but with the iPad direct, the tonal balance was flatter.  In contrast, listening to the track with the Grado SR80, produced a considerably lighter overall balance.  Guy Garvey’s voice was more raspy and less full – seemingly more focused but with less meat on the bones.  The bass guitar line with the Grado was dry and didn’t ground the tune.  The Grado though did reveal more airiness and openness between instruments, as well as reverb from the venue.

Trying something different once again, I stepped it up to Metric’s – Live it Out album and the track Poster of a Girl.  This is a very heavy track, which is great for getting an idea of how headphones can perform with rock.  The thump of the kick drum effectively anchored the track.  Bass plucks via the Spirit One, came across taught and full with a hearty sound.  When Emily began singing, the character of her voice was all there – just slightly nasal, girlish and seductively wispy.  The cymbals were tamed to some degree but remained realistic – just as if they were a little further off.  It was evident the Spirit One had a way with rock – able to tame the rough edges while still keeping it real.  In comparison, the Grado, delivered ruthless clarity and definition but compromised weight of the track, diminishing its impact.  Drums were reduced in perceived size and presence.  Overall, the Grado made the track more two-dimensional, robbing it of fullness, versus the Spirit One.

To summarize the sound of the Spirit One, I would say that they present a very integrated and essentially neutral take on most tracks.  They provide taught, full and extended bass, polite treble and a surprisingly out of your head soundstage.  That said, they are somewhat reticent on the extended hi-frequencies and consequently may be found as a little short on transparency.  However, this might be considered a benefit, given the multitude of brittle and tipped up recordings that exist, as well as the less than optimal mobile playback devices.  Music through the Spirit One was consistently portrayed in a natural and warm manner with no spotlighting or accentuation.  The midrange of the Spirit One has a velvet-like smoothness, sounding lifelike with both male and female voices and bringing with it a sense of humanness.  Interestingly enough, though I found that detail, dynamics and tonal colour were more present with my headphone amplifier, the overall frequency balance seemed a touch more even when I ran the Spirit One directly off my iPad.  With the iPad there was a slightly lighter overall weight that provided a perception of greater openness.  I would speculate that Focal spent some considerable time optimizing the Spirit One for iDevices / mobile devices.

In a nutshell, if you’re looking for a good set of sealed headphones for mobile use – the Focal Spirit One should definitely be on your short list – they provide great value. If you’re going to rely on your iPod/iPad/mobile device alone to drive your headphones – the Spirit One is an absolute must for audition.  These headphones do capture “the Spirit of Sound” and they look great while do it too!